Menu
You are here: Articles2022 ICSUSA ARTICLESApril 2022 - Energy of all Kinds: Plans for Change do Change

Energy of all Kinds: Plans for Change do Change

Yes, you may have guessed that this is a German word, and it means ‘energy turnaround’ or ‘energy transformation’. The concept of moving from fossil fuels to renewables, including nuclear, was first articulated in 1980 but in 2010 it became an important German government policy. The various German ministries then set to work to develop a schedule to bring about this ‘energy turnaround.’

The early drafts of the plans had nuclear energy as a major source of power generation but as the disaster unfolded in Japan, and the extent of radiation contamination became known, the plans changed. And changed significantly. The ensuing nuclear reactor meltdowns caused by the earthquake-generated tsunami forced the initial evacuation of more than 150,000 people from about 140 square miles of land.

The overriding German concern was that if a nuclear disaster could happen in a highly advanced nation like Japan, it could happen here [in Germany]. Many people and many politicians thought this might be an unacceptable price to pay. Indeed, in a survey 3 years later only 5% of the public would accept a nuclear power plant in their neighborhood [see chart from Wikipedia.] 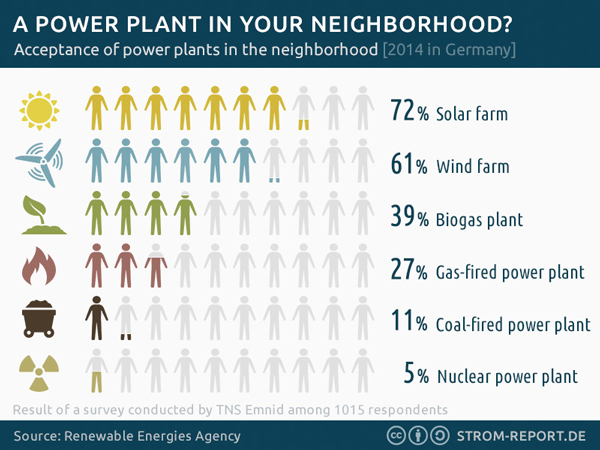 Of the 17 nuclear power plants in operation when Fukushima happened in March 2011, only 3 remain operating and they are scheduled to be shut down in 2022. The overriding concerns were the safety of the technology, and the storage of the nuclear waste. This decision has slowed up the orderly “energiewende” significantly.

Germany has the fourth largest economy in the world, as measured by GDP [Gross Domestic Product], behind the U.S, China and Japan. The energy decisions made after Fukushima forced Germany to burn more coal and import more gas from Russia, even as they invested heavily in wind turbine and solar power.

And now we have geo-political events such as the Russian invasion of Ukraine upending again the energy supply and mix for Germany and all of Europe. Russia supplies about 40% of EU’s natural gas imports and meets about 55% of Germany’s gas needs. This heavy dependance on Russian gas gives Russia a lot of leverage [read, blackmail] and power over the affairs in Germany.

These events combined, natural disasters and geo-political events, along with carbon emissions to the atmosphere resulting in climate change, and the now designated “climate crisis”, has really galvanized Europe’s new investments in renewable energy.

Germany’s original target of getting to net zero carbon emissions was 2050. A new plan announced in March 2022 after the Russian invasion of Ukraine, has moved that target to 2035, a full 15 years earlier.  In addition, its new announced goal of getting 80% of its electrical needs from renewables is now 2030 which is up from its goal of 40.9 % in 2021. WOW!.

See circular chart from Clean Energy Wire titled, “Share of energy sources in gross German power production in 2021.” In order to meet this revised target, three slices of the circular pie, i.e., Natural gas, Hard coal, and Lignite must halve their carbon emissions in the next 8 years. And, the amount energy Germany needs to get from renewables must double.

This is a tall order and will require an enormous amount of capital and political will. 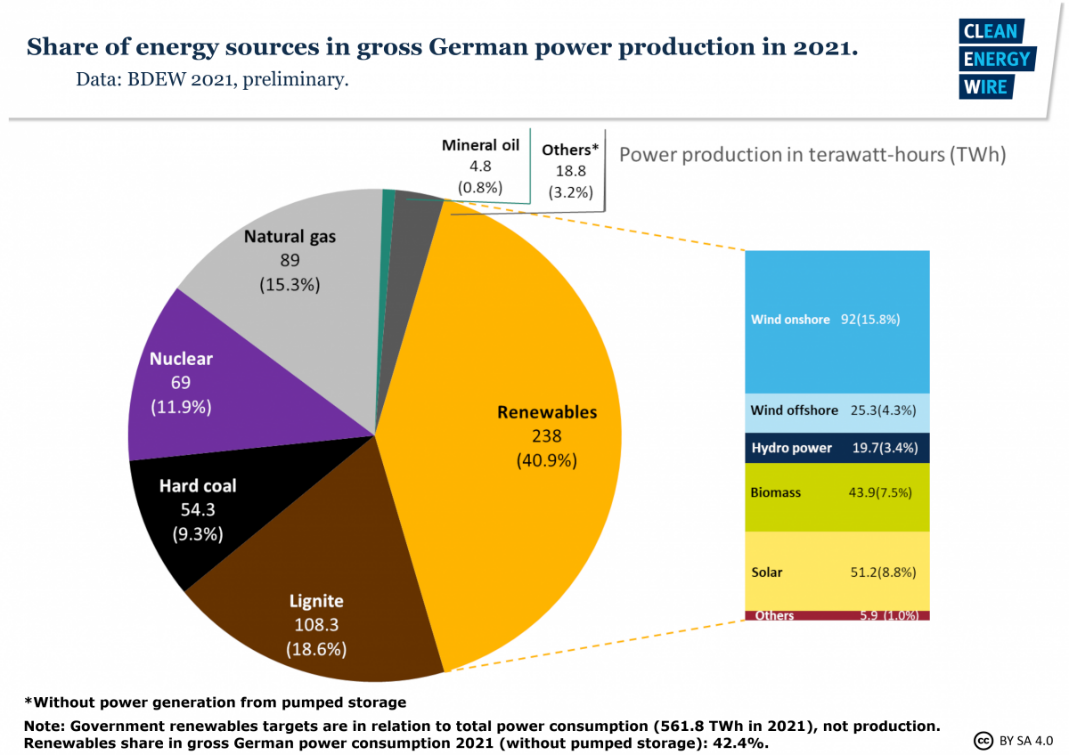 Now we will have to see if this “war,” and resultant build-out of renewables, will give Germany the freedom to define its own foreign policy direction without the implied threat of holding up gas supplieson its economy and overall well-being. A positive side effect of this revised plan will be to also reduce carbon emissions significantly.

As we all deal with the issues of moving away from fossil fuels to renewables to try and stabilize our climate system we find an artist, Nicole Kelner, who has challenged herself in an interesting way. At the beginning of 2022 she decided to create a new watercolor piece every day for the next 100 days. Her stated intent is “to create more art that inspires awe and hope around climate change rather than fear”.

Many of her art pieces can be found on her website [Nicole Kelner] and two are illustrated here. The first titled, “Whales + Carbon Sequestration” follows the life cycle of a whale. As the whale surfaces it poops and breathes, with the whale poop fertilizing phytoplankton. This phytoplankton pulls in carbon dioxide from the atmosphere as part of its life cycle, and in turn, is consumed by the whale. When the whale dies it sequesters about 33 tons of carbon dioxide in its carcass and sinks to the ocean floor.

This factoid illustrates the complexities and one of the many ways nature tries to balance and remove carbon dioxide from the atmosphere. 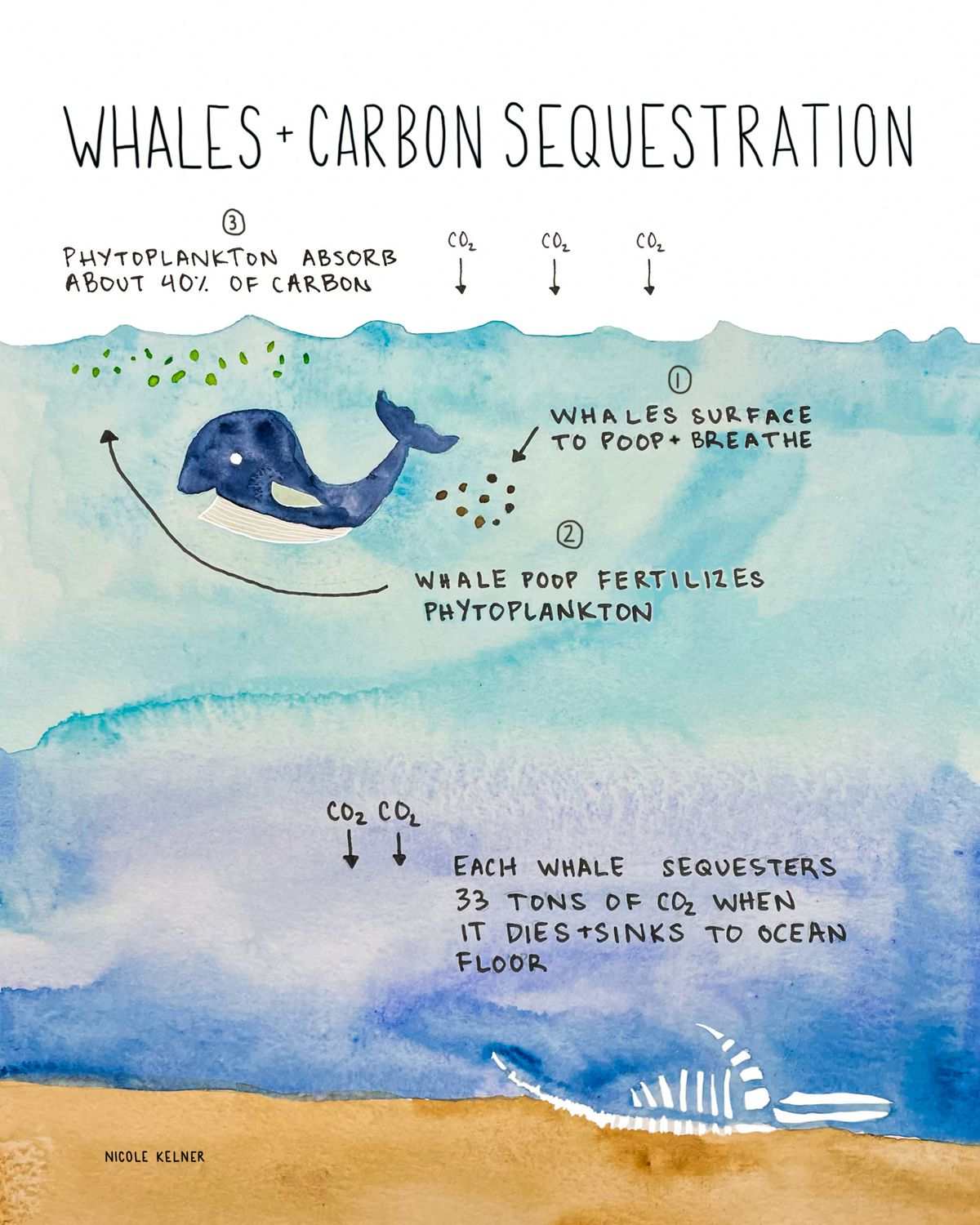 In another climate piece Ms. Kelner has “a set of vertical lines transitioning from a cloudy blue to a vibrant red.” This was “modeled after data representing the rise in Earth’s temperature between 1850and 2021.” When you understand that context, “the artwork transforms from a soothing, abstract painting to something much more meaningful – and devastating.” 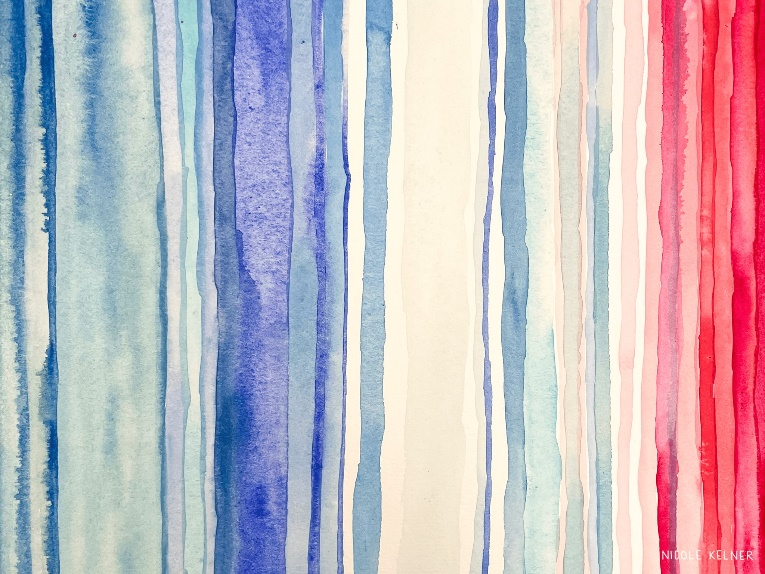 And finally, we have the collective efforts of many people, and powerful computers used to analyze an enormous amount of data, to forecast the “Monthly Temperature Outlook” from NOAA for April 2022.  For NYS it appears we may have a good chance of having warmer weather than normal. 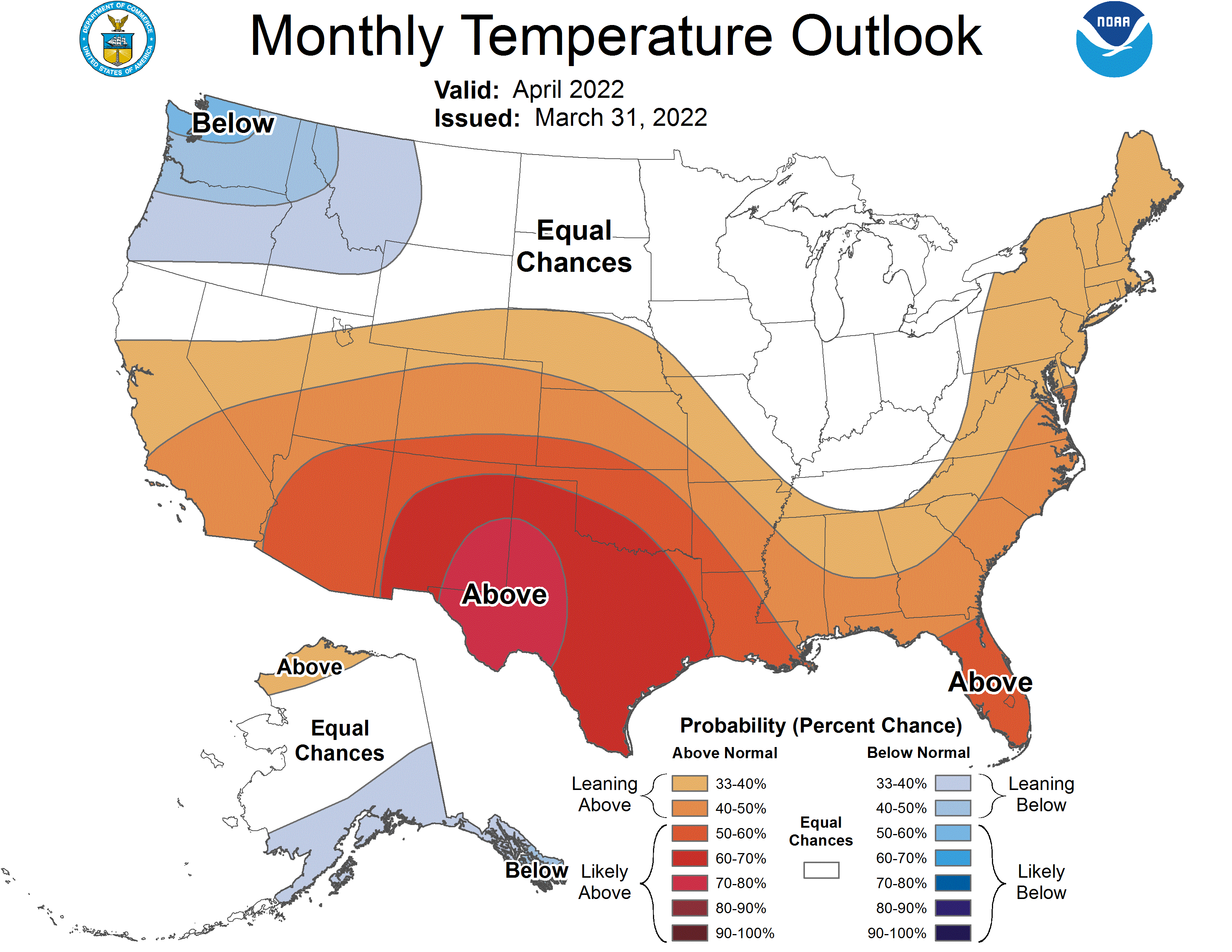