Menu
You are here: Articles2021 ICSUSA ARTICLESApril 2021 - Rivers of Air, Rivers of Water: Major Parts of our Changing Climate System

Rivers of Air, Rivers of Water: Major Parts of our Changing Climate System

Earlier this year, heavy, flooding rains and record snowfalls impacted a section of central California’s coast and inland mountains. This event was brought about by what is called a river in the sky. See the illustration titled “Rivers in the Sky” with data from NOAA and NASA organized by Paul Horn of Inside Climate News [ICN], a free website that issues regular news on all things climate.

These atmospheric rivers are an important part of our weather and climate system. As the illustration indicates, these rivers can be from 250 to 500 miles wide and carry more water than twice the volume of water of the Amazon River. 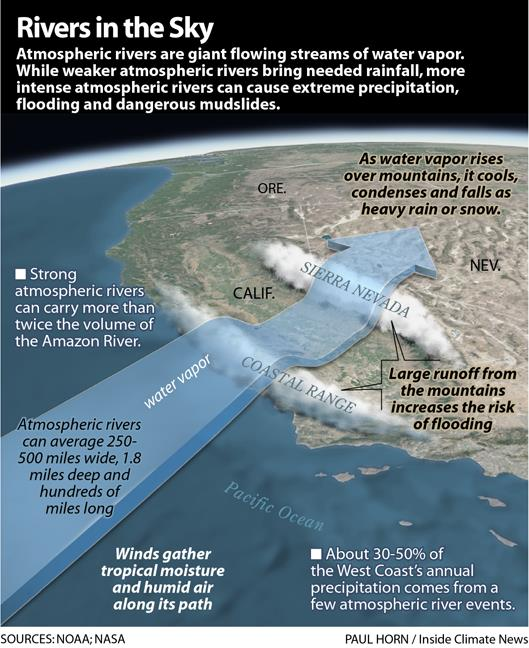 These “river” events are important for the West Coast’s annual precipitation needs. However, the nature of these events is changing and they are getting more powerful and contain ever larger amounts of water. The oceans they pass over are getting warmer, as is the atmosphere that can carry more of this moisture, and so there is more water to feed these atmospheric rivers.

When a river in the sky comes ashore, after a months-long drought on land, and a record-setting wildfire season, the extreme precipitation causes floods and mudslides. See photo of a section of Highway 1 near Big Sur that collapsed on January 31, 2021 after a three-day rainfall event [Josh Edelson/AFP viaGetty Images]. Several areas reported 24-hour rainfall records. Two years prior, another nearby section of the road was washed out in another extreme “rivers in the sky” rainfall event. 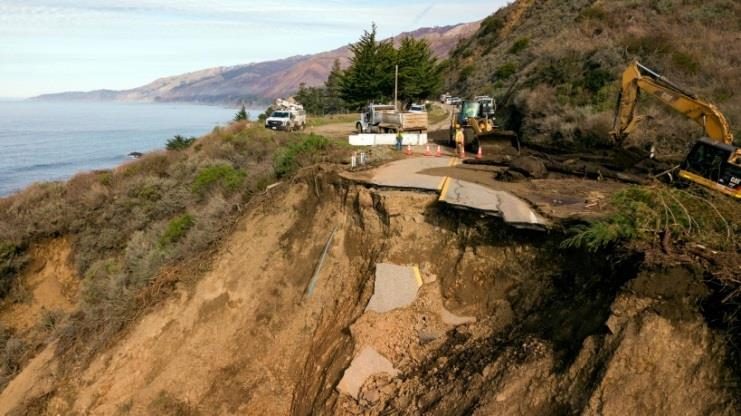 Climate scientists have studied these events and created a scale to rate their strength. Over the past almost 40 years “the 10 most intense atmospheric rivers caused nearly half of all flood damage to the Western United States” [ICN 02022021]. This is testing our infrastructure and the ability of water managers in the region to prepare for feast or famine cycles of rain, snow and runoff.

One young Malaysian artist [Tan Kar Mern] is exploring climate change and intense rainfall events with her medium, printmaking. She wants to use her artist skills and imagination to raise awareness of climate change and ecological calamity.

See photo of her work which is titled, “Intense Rainfall, Devastating Floods”; in aquatint and etching on Fabriano Rosapina Paper, 2021 [Photo: Hom Art Trans]. The center and top of the image shows a powerful rainstorm and the erosion and aftermath of the resulting flood.

Now let’s move to a river in an ocean.

According to Woods Hole Oceanographic Institute the Gulf Stream is “one of the mightiest rivers you will never see, carrying some 30 times more water than all the world’s freshwater rivers combined.”

This may sound a little counter-intuitive but the North Atlantic Ocean does contain a river of sorts and is called the Gulf Stream. It moves west from southern Europe and western Africa carrying vast amounts of heat to North America, the Gulf of Mexico and along the east coast of the United States. It is like a conveyer belt carrying energy from some places and redistributing it elsewhere. As it moves along our east coast and flows north, and then northeast towards Ireland and UK, it carries this energy, or heat, that keeps Europe relatively warm despite its northern latitudes.

See image of Gulf Stream with the progressively warmer yellow/orange/red water along the coast of North Carolina, Virginia, Delaware, New Jersey, Long Island, NY and Cape Cod. It is up to 20 degrees Centigrade warmer than the colder waters in different shades of blue to the north or top of the image. 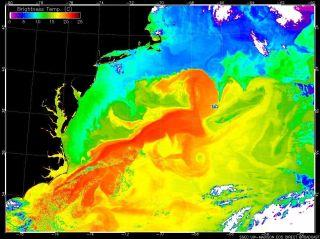 Climate scientists have given this river of warm water a long name; it is part of the Atlantic Meridional Overturning Circulation, but we can call it the AMOC for short. It is one part of Earth’s major climate-regulating ocean currents. Measurements are now showing that this flow of water is slowing down, slower than it has been in thousands of years.

The potential impact of this change is enormous and could influence weather patterns and sea levels on both sides of the Atlantic. One estimate is that this current supplies Scandinavia the heat equivalent to 78,000 times its current energy use. The slowing current may cause the water to build up, or pool, along the east coast and increase sea level rise there more than expected.

The major concern at this time is when, and at what point, there may be a tipping point where the system cannot recover. It would then lock in those big changes in climate for an extended period of time with impacts all around the world.

Meanwhile we still have a divided public opinion on whether global warming even exists. The denial campaign funded largely by the fossil fuel industry has deliberately confused people on the issue. A recent survey by Yale’s Climate Change Communication program produced the following results: see “Global Warming’s Six Americas, December 2020”.

The responses are grouped into six categories: Alarmed, Concerned, Cautious, Disengaged, Doubtful and Dismissive. The highest belief in global warming [two circles on left] totals about 55%, while the lowest belief in global warming [two circles on right] adds up to 20%. About 25% of the respondents fall in the center. The 55% number shows some improvement over earlier surveys but we have more work to do in providing factual, clear scientific information to the public. 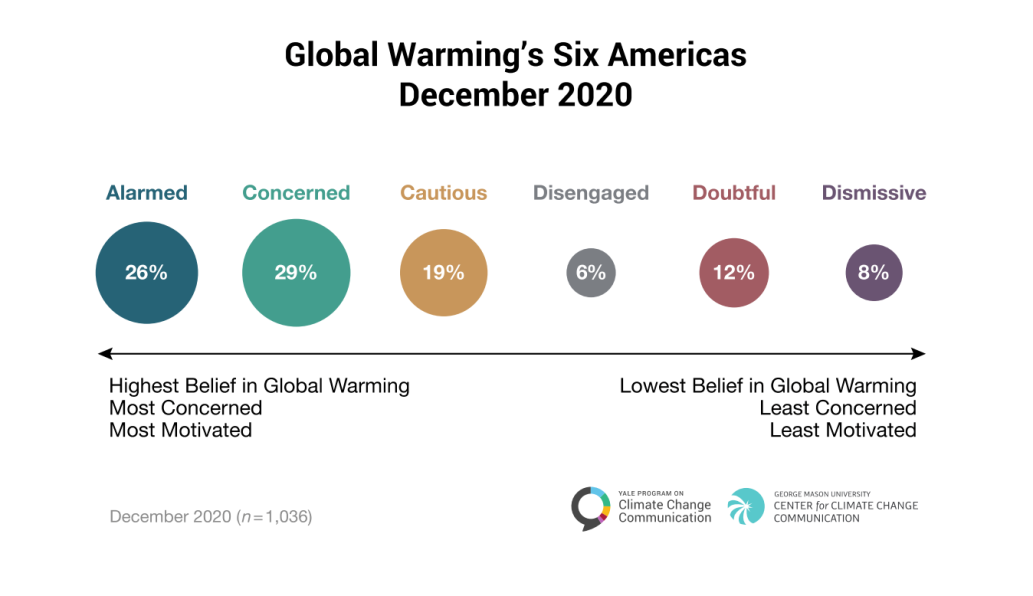