Menu
You are here: Articles2020 ICSUSA ARTICLESAugust 2020 - Pandemic or Not, Large Renewables Projects are Moving Forward

Pandemic or Not, Large Renewables Projects are Moving Forward

We are dealing with a lot these days. From the pandemic now claiming the lives of about 1,000 people/day [over 155,000 Americans have died so far, with more than 4.6 million infected], to climatechange/climate emergency with heat waves, fires, floods and drought at the moment. Then we have massive unemployment, over 45 million Americans have filed for unemployment, a dysfunctional government in D.C. where recently a Republican representative in Congress used foul language to describe a female colleague, and more I am sure.

There are some bright spots, however, but whether they will shine bright enough to dispel those dark clouds remains to be seen. But the clean energy disruption continues as fossil fuel consumption is lower and some very large renewable projects [wind and solar] are either on schedule or close to it.

Note the Chart consisting of five boxes from Oil Change International. By its own definition “OCI is a research, communications, and advocacy organization focused on exposing the true costs of fossil fuels and facilitating the ongoing transition to clean energy.”

This chart summarizes the options we have regarding the shift to renewables vs. “Continue expanding fossil extraction?” If we say “YES” and continue to expand fossil fuel extraction this now leads to the next box, “Eventually limit emissions.” From here the two boxes, “Economic Chaos” and “Climate Chaos” follow as a result of this path.

If, however, we say “NO” [after the first box], this now leads to “Managed Decline” in the use of fossil fuels. It is pretty clear that this would be the preferred route and indeed, we may be on this path now.

Consider this: it took 40 years for the U.S. solar industry to complete the first million solar installations in 2016. Three years later [2019] the industry completed the second million and, according to Wood Mackenzie, the next million will take less than two years. Improving and evolving technology and a continuing reduction in costs are making these solar installations possible.

And it is not just in the U.S.

The Netherlands has just completed the largest floating Solar Park in Europe. See photo of Zonnepark Bomhofsplas courtesy of Energiefonds Overijssel. Go on, you can pronounce this. Just try it.

This installation took just 7 weeks and will power 7,200 homes. The installation is also sensitive to the environment. The glass-glass panels allow light to get through to the water, are high enough to allow good airflow and are self-contained. Only one cable connects this array to the land keeping the impact to the flora and fauna on the shore to a minimum.

Let’s take a peek at a recently approved [28 May 2020] huge solar project east of London, in the Thames River estuary, U.K. Named, Cleve Hill. It is the largest solar farm in the U.K. and part of that country’s efforts to reduce carbon dioxide emissions to zero by 2050. See “Image: Google Earth/Landsat.” This installation will have 880,000 panels on about 900 acres of marsh/farm land in Graveney, Faversham.

The Google image shows sectors where the solar panels will reside along with proposed wildlife areas and the location of a large lithium battery storage compound. The 350 megawatts of electrical power, enough for more than 90,000 homes, will be fed into the nearby powerlines of the national grid. 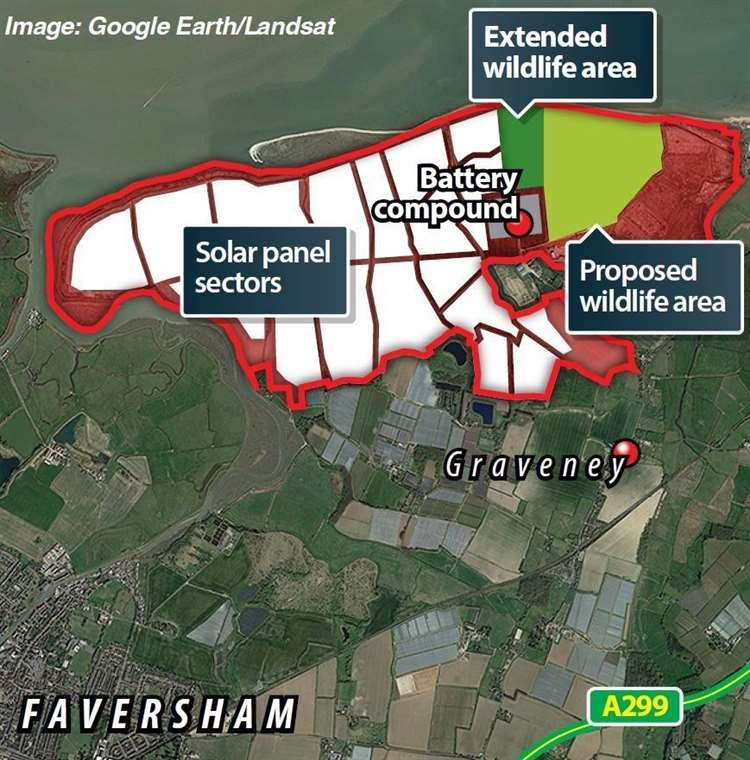 It is not without controversy however. Many local residents lament the loss of the open land and the impact on wildlife. The challenges of siting power plants of any variety, including nuclear, is one faced by most communities and countries. IKEA has bypassed this issue to some degree, and in 2019, the company installed 1 million solar panels on 370 store and warehouse roofs.

As we turn to look at another renewable power source, wind power, it is interesting to note that the U.K, as of February 2020, had 10,429 wind turbines with more than 2,000 of them offshore.

But now the U.S. also has its sights set on harvesting some of the abundant wind energy off the east coast. The Dominion Wind Project off the coast of Virginia had its first two wind turbines installed recently. The 250 foot long blades were shipped from Germany aboard a specially designed ship in April.

The construction of these two test turbines [3 megawatts each] is providing the information and engineering data needed for the further development of this project to a planned capacity of 2,640 megawatts by 2023. See map by PAUL HORN/InsideClimate News.

Previously, the U.S. had a total of four wind turbines located off the coast of Rhode Island, supplying Block Island with electricity and displacing the use of diesel generators. 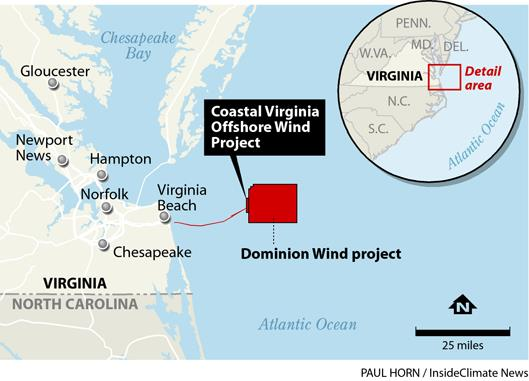 Even with COVID, with all of its social and economic impacts, 2020 is set to be the biggest year in history for U.S. installations of wind turbines, solar panels and battery storage; and 2021 looks set to be even bigger, [see www.cleantechmedia.com, June 16, 2020].

Meanwhile, the Earth Institute map of the western U.S. shows a severe megadrought in the southwest that may be the worst in 1,000 years, and Death Valley, CA recorded 128 degrees Fahrenheit in mid-July, possibly a record. Climate change doesn’t stop here; in late July, Baghdad, Iraq recorded temperatures of 120, or more, for days with a high of 125 degrees; then extended rains in Bangladesh flooded one- quarter of this country of 167 million people. This on-going energy transition can’t come soon enough. 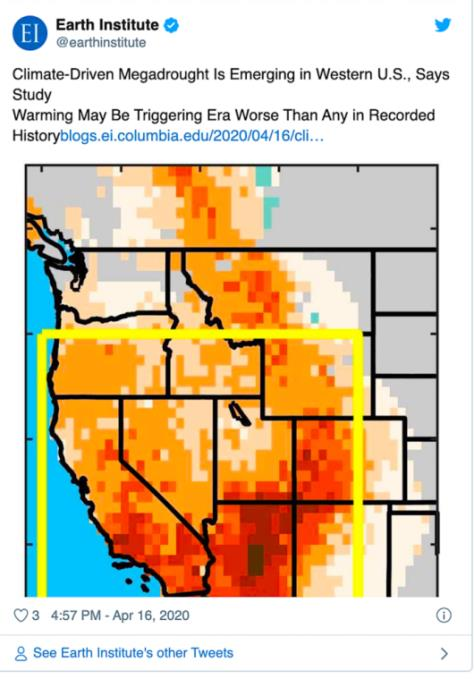 Cross your fingers [and toes].