Menu
You are here: Articles2012 ICSUSA ARTICLESJune 2012 - Oceans Absorbing Lots of Carbon Dioxide from Fossil Fuels: But it Comes With a Cost

June 2012 - Oceans Absorbing Lots of Carbon Dioxide from Fossil Fuels: But it Comes With a Cost

This is a true story!

An Illinois man claimed that he found a dead, intact mouse inside a can of Mountain Dew and became sick. He filed a lawsuit. In defending itself PepsiCo engaged a veterinarian who was knowledgeable of the effects of carbonated soda drinks on mice. The affidavit filed by L. McGill DVM, makes for interesting reading. It states that a mouse will have no calcium in its bones after immersion within a week, and that after one month, “all of the mouse’s structures would not be recognizable.”

The can had a manufacturing date that was 74 days prior to the claimed event. Finding an intact mouse would not be possible. So why would this happen, and what does this have to do with climate science?

When carbon dioxide dissolves in water it forms carbonic acid, and the more gas that dissolves the more carbonic acidic formed and the more acidic the liquid becomes. The following equation illustrates this.  The acid is shown as H+ and/or 2H+ and is responsible for dissolving all of the calcium in the mouse’s bones.

Our oceans are absorbing tens of billions of tons of carbon dioxide resulting from the combustion of fossil fuels. As a matter of fact it is estimated that the oceans absorb from 1/3 to 1/2 of all the CO2 that our civilization emits. In one way, this is a good thing since it removes the greenhouse gas from the atmosphere thereby reducing its warming effect.

However, our oceans are becoming more acidic just like the can of soda, and that is not a good thing.

The diagram labeled “A” provides a visual simplification of a part of this complex process. Carbon dioxide is released from our homes, cars, factories and other sources, and a significant amount dissolves in Earth’s oceans. This then undergoes a series of chemical reactions which is partially shown here.

The insert in lower left of this diagram illustrates that with increasing amounts of CO2 in the atmosphere [bottom axis], the less the amount of CO32- or carbonate that remains available [left axis], a critical component required for shellfish, finfish and other life in the sea. 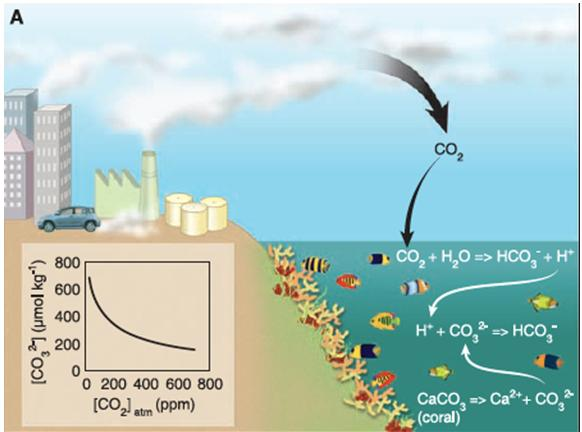 The next diagram [Historical & Projected pH & Dissolved CO2] has two curves. It illustrates the relationship between decreasing pH [increasing acidity], with increasing amount of dissolved carbon dioxide. The left axis shows the pH decrease that has already occurred [through today] and that expected during this century. [Thanks to S. Danville for the links to these diagrams.] 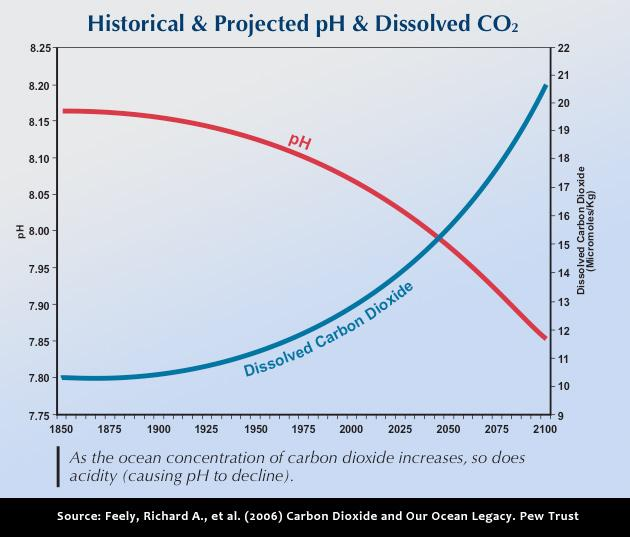 These two illustrations link the impact of increasing carbon dioxide concentrations in our atmosphere, on both increasing ocean acidity, and the increasing loss of carbonate required for the biodiversity in our oceans.

It is both of these changes that worry oceanographers, biologists and climate scientists. We are in the process of changing the chemical balance in our oceans with consequences to its web of life. A peer reviewed research article in Science indicates that oceans may be turning acid much faster now than at any time in the past 300 million years. These rapid changes make it difficult for organisms to evolve and adapt to their “new” environment.

A 68 page report released by The Royal Society [England] in June 2005, free and available on-line is titled “Ocean acidification due to increasing atmospheric carbon dioxide.” It details clearly the chemical changes occurring in our planets’ oceans today, and the implications of those changes.

Indeed, the acidity of the oceans today has increased by 30% in the last century and this acidity could increase by a factor of five by 2100 at projected emission amounts.

An April 2012 paper by Burke Hales et al. of Oregon State University discusses the collapse of one commercial oyster hatchery that has now been linked to an increase in ocean acidity. Commercial oyster production is a 1⁄4 billion dollar industry on the West Coast and they need these hatcheries for future harvests. However, increased acidity has inhibited the growth of oyster larvae’s shells to levels that may not be economically viable.