Menu
You are here: Articles2013 ICSUSA ARTICLESMarch 2013 - We May Ignore or Deny It, But Climate Change is Occurring

March 2013 - We May Ignore or Deny It, But Climate Change is Occurring

The National Academy of Sciences (NAS) was created by an act of Congress and signed into law by President Lincoln on March 3, 1863. It is the top scientific advisory body in the United States and has advised the nation on all matters of science in times of both peace and war for the past 150 years. The members are elected by their peers, in recognition of achievement in their respective fields.

On May 7, 2010 the NAS issued an open letter in the prestigious journal Science on the subject of “Climate Change and the Integrity of Science”. It was signed by 11 Nobel laureates and 255 NAS members in the fields related to climate science.

The letter received media coverage in both the United States and globally.

Just what did the letter say?

It included five summary points: 1) “The planet is warming due to increasing concentrations of ...” greenhouse gases. 2) “... is due to human activities, especially the burning of fossil fuels and deforestation.” 3) “Natural causes ... are now being overwhelmed by human-induced changes.” 4) “Warming the planet will cause many other climatic patterns to change at speeds unprecedented in modern times,” 5) “The combination of these complex climate changes threatens coastal communities and cities, our food and water supplies ...”

Has this letter generated any U.S government policy decisions since to address these concerns?

Our House of Representative and, perhaps less so, the Senate, are in a state of denial. According to an article published February, 21, 2013, in the Guardian by Suzanne Goldenberg, “hundreds of millions of dollars” have been spent “on anti-climate action, anti-solar energy, and anti-wind energy campaigns” to sow disinformation, confusion and distrust of the science supporting climate change. This money is coming from Donors Trust, and Donors Capital Fund, “promising anonymity to their conservative billionaire patrons ...” 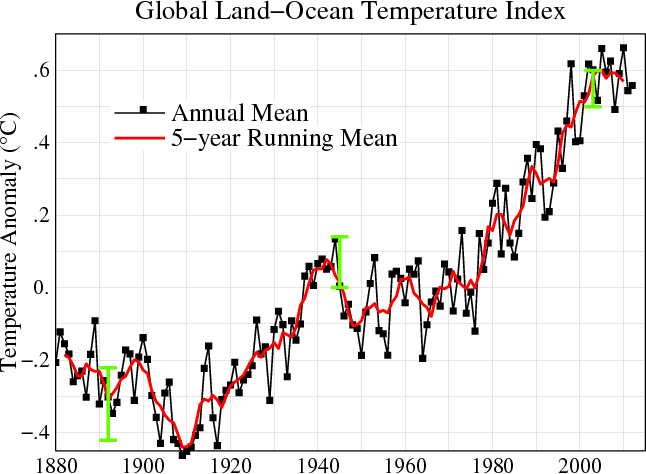 Meanwhile our planet’s weather, and climate, continues to reflect the points made in the NAS letter.

Let’s look at two sets of data (a graph and a map) that support the first point in the letter.

The graph “Global Land-Ocean Temperature Index” from 1880 to 2011 is compelling. It clearly shows the long term, steady increase in global temperatures.

The map titled “Winters are Warming Across the U.S., Trends in Average Winter Temperatures, 1970 – 2012” shows the temperature changes across the lower 48 states. The largest temperature increases are across the northern and northeastern states. 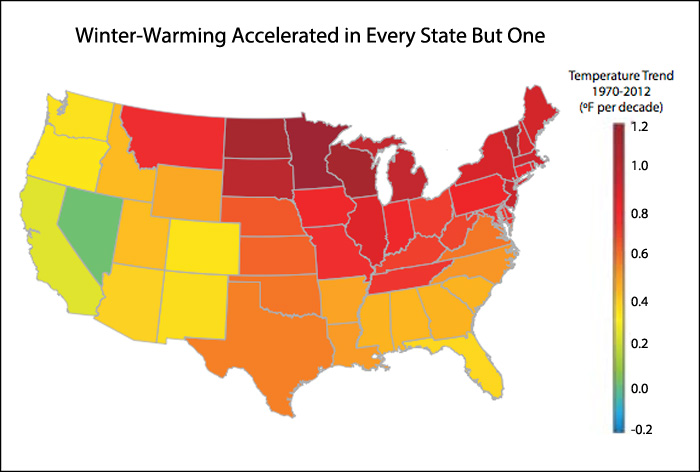 The second point in the letter refers to human activities and the combustion of fossil fuels that releases large amounts of carbon dioxide into the atmosphere. The third illustration here, titled “2012 Global Carbon Emissions”, details the amounts of this gas released into the atmosphere in gigatons (billions of metric tons). The 2012 amounts are about 50% higher than in 1990 and higher than 2011 as well. Indeed overall emissions are increasing faster in developing countries such as India and China. 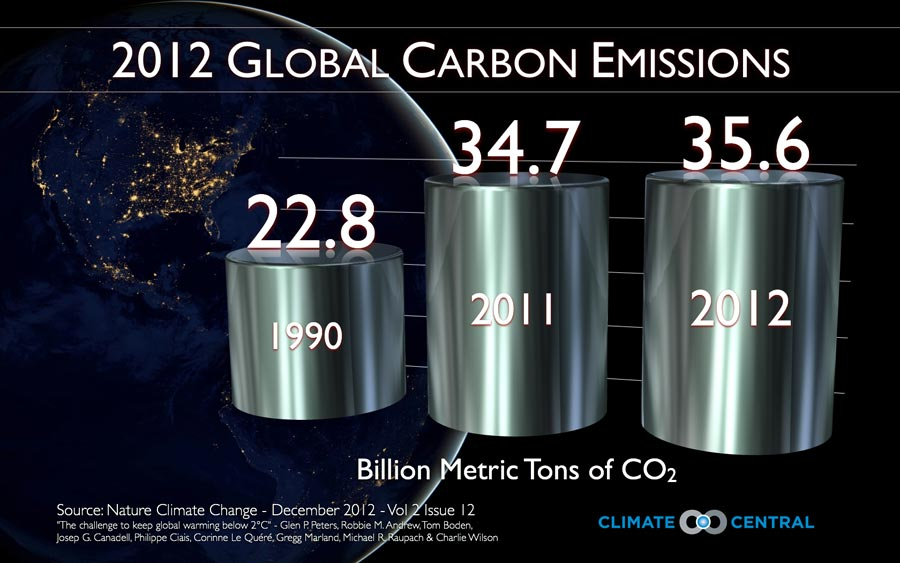 These events impacted more than 50% of the land mass and a significant percentage of the population of the lower 48 states. The most expensive will be Super Storm Sandy in October 2012 whose costs are now estimated at more than $60 billion.

We must also remember the record setting floods in Lake Champlain, May 2011, and Tropical Storm Irene, September 2011, which caused tremendous damage to property and infrastructure in Vermont, New York and elsewhere.

Scientists, in a paper published in the Proceedings of the National Academy of Sciences on February 25, 2013, have now identified a physical mechanism behind extreme weather that is tied to climate change.

The global air motion in the northern hemisphere normally takes the form of moving oscillating waves.

Now, however, these Arctic, or tropical, waves may remain in place for weeks prolonging and exacerbating that particular weather pattern.