Eunice Foote is not a household name but it sure could, and perhaps should, be. Born in 1819 in CT, she went to school in Troy, NY, and was one of the few women at that time to study chemistry and biology while attending what is now known as the Emma Willard School.

Only recently have her experiments on atmospheric gases been recognized as, perhaps, the first study of carbon dioxide [CO2] and its role in warming the earth’s atmosphere. She summarized her findings in a paper that was delivered by Prof. John Henry at a scientific meeting in 1856. Women did not normally give scientific papers in those days. The two page paper titled, “On the Heat in the Sun’s Rays,” is illustrated here and additionally at https://www.climate.gov/news-features/features/happy-200th-birthday-eunice-foote-hidden-climate-science-pioneer .

In the language of the day she goes on to state, “Thirdly. The highest effect of the sun’s rays I have found to be in carbonic acid [CO2] gas.”

“The receiver containing the gas became itself much heated ... . An atmosphere of that gas would give to our earth a high temperature; and if as some suppose, at one period of its history the air had mixed with it a larger proportion than at present, an increased temperature from its own action as well as from its own weight must have necessarily resulted.”

In the following decades other scientists such as John Tyndall [1859], Svante Arrhenius [1896], Guy Callendar [1938], Gilbert Plass [1950’s], Charles Keeling [1960’s] and others confirmed and built upon her work.
Over a century later, ExxonMobil’s own scientists corroborated Eunice Foot’s findings. However, they and other fossil fuel companies began spending hundreds of millions of dollars, directly, or in supporting others, in denying these facts. In some measure they are still doing so today. Meanwhile the level of carbon dioxide in the atmosphere continues to increase along with the warming of the atmosphere.
On 22 October 2019, New York’s attorney general took its case against ExxonMobil to trial in state Supreme Court in Manhattan. It is claiming it misled investors and the public by misrepresenting the risks that climate change would have on its oil and gas assets. It was essentially keeping two sets of books. The trial will probably last for weeks. 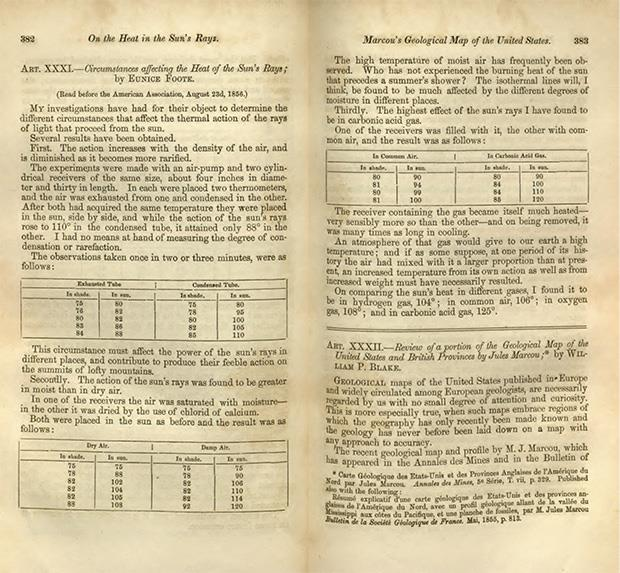 One startling impact in the accumulation of this greenhouse gas [GHG] in the atmosphere has been the loss of Arctic Sea Ice (1979 – 2019). See the 40 year summary of sea ice volume from the Polar Science Center, University of Washington, (Piomas v2.1, Zhang and Rothrock 2003). The curves of sea ice volume continue rising in January, along with colder temperatures, and continue growing until about Mar/Apr/May when warming begins. 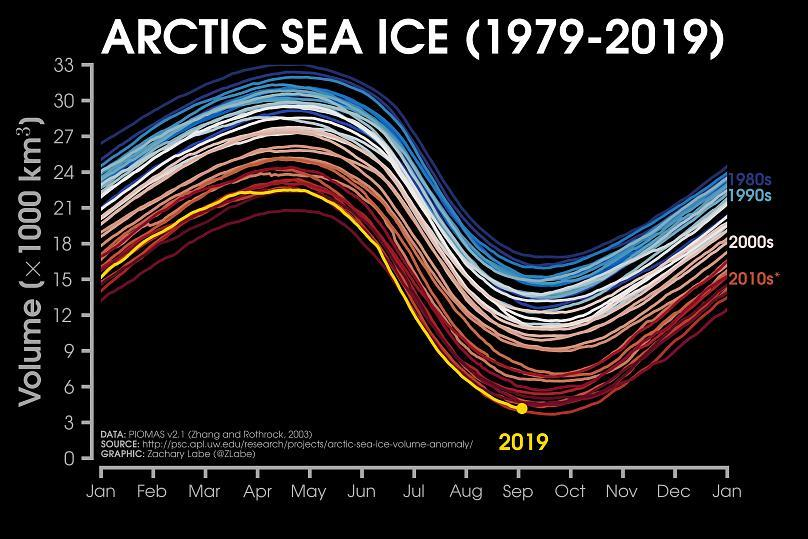 Eunice Foote was right on!

The idea of planting trees to halt the spread of deserts, and also to soak up, or sequester this new carbon in the atmosphere from the burning of fossil fuels, has been taken to an amazing extent by China. Over-grazing, strong winds and rainfall pattern changes have contributed to growing desert in the northern part of China. To counter this, the government developed a program that has resulted in the planting of billions of trees in that area. Every year, the government plants seedlings over an area twice the size of Ireland! The photo here gives one some idea as to the extent of this effort [Wang He/Getty]. 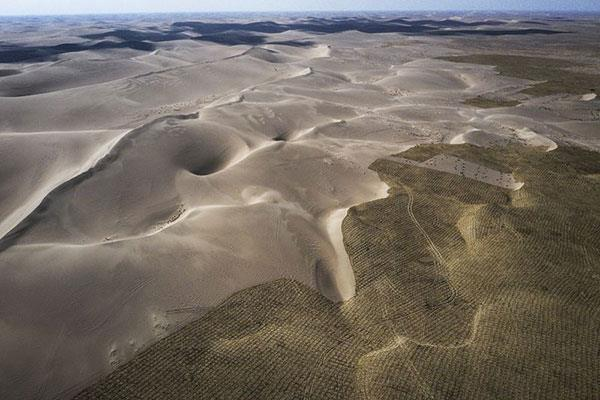 It will be some time before the success of this program will be known and what its’ impact will be.

Based on the 2017 book, “Drawdown” by Paul Hawken, the website www.drawdown.org/about states “Project Drawdown is the most comprehensive plan ever proposed to reverse global warming.” The Drawdown pie chart reproduced here has 80 different slices, or 80 solutions, that collectively can be used to stop and reverse global warming. The website itself has more information on each of these slices. This “research organization reviews, analyses, and identifies the most viable global climate solutions, and shares these findings with the world.

The intent here is change the global conversation about climate change from “gloom and doom” to “one of possibility, opportunity, action and empowerment.” 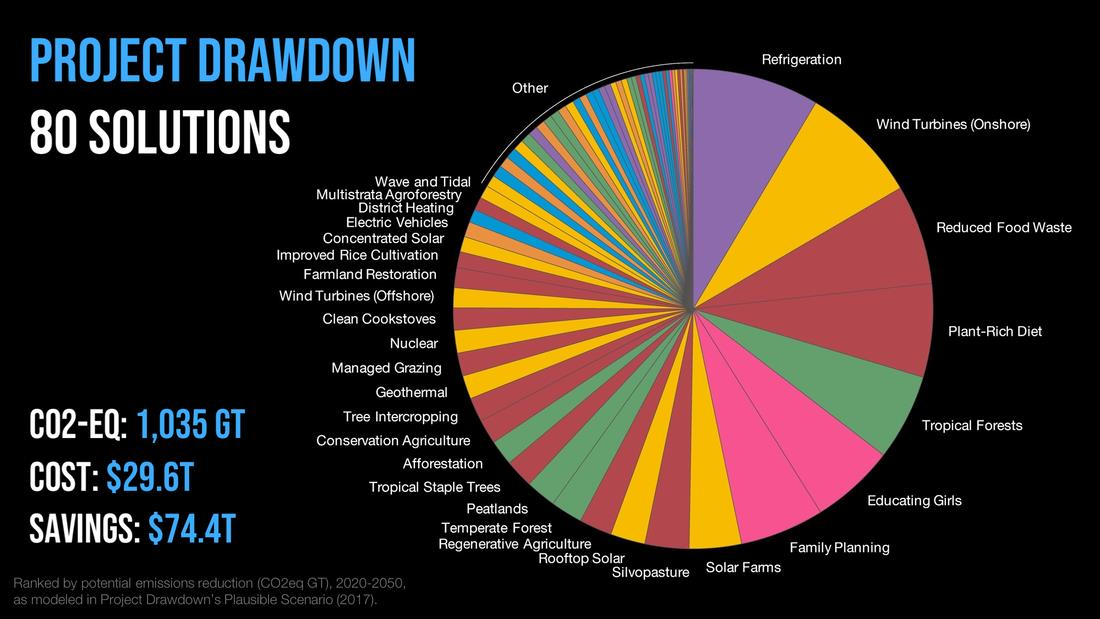 Briefly, let’s look at just that portion on the upper right side of the “pie.” The major slices include “Refrigeration,” “Wind Turbine [Onshore],” “Reduced Food Waste, Plant-Rich Diet,” “Tropical Forests,” ”Educating Girls” and so on. The drawdown website has lots more information to further explain the information in this pie chart. 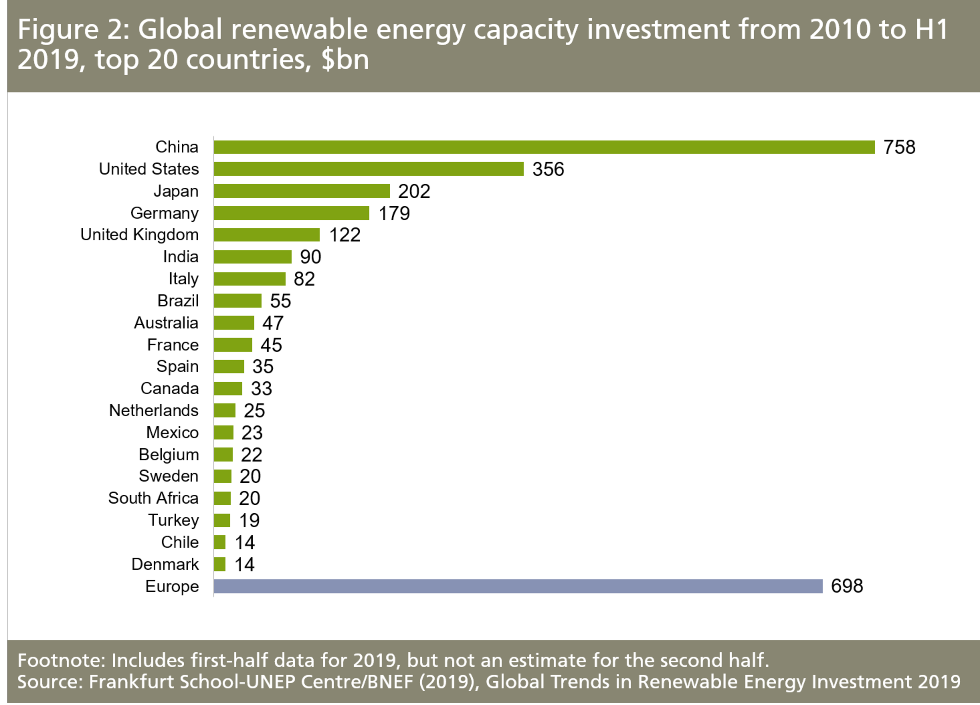 And finally, the bar chart labeled “Figure 2: Global renewable energy capacity investment from 2010 to H1 2019, top 20 countries, $bn,” clearly shows that China has taken the lead in renewables. It has invested more than twice that of the U.S. and more than any other country on the planet.