Menu
You are here: Articles2021 ICSUSA ARTICLESMay 2021 - Climate Crises: The New Clock is Ticking, and it’s in Union Square, NYC, No Less

Climate Crises: The New Clock is Ticking, and it’s in Union Square, NYC, No Less

The language used to describe what is happening to the climate of our Planet as we continue to emit large amounts of greenhouse gases [GHG] has changed in the recent past. At first the term “global warming” was mostly used since it actually described the fact that the atmosphere was indeed warming. Then it became evident there was a lot more to it than just that.
Media and scientists then began to use a more comprehensive term “climate change”. This broader terminology reflected severe weather events fed by increased energy [heat] in the oceans and on land which supercharged hurricanes, droughts, rising sea levels, intense rainfall amounts to levels never seen before [Hurricane Harvey dumped about 4 feet of rain on Houston in 2017]. This led to ”climate emergency” which became the currency for a time.

Now the term “climate crises” is being used to describe our more full understanding of the impact of this increased heat in all of Earth’s climate systems [hydrosphere, geosphere, biosphere, atmosphere and cryosphere]. Descriptive terms now in use include references to climate tipping points, feed-back loops, changes in ocean currents, significant loss of land-based ice [glaciers, ice caps], extinction of species, loss of permafrost, floods, desertification, and millions of climate refugees on the move around the world, and more. Whew!

So, climate activists have now developed an 80 foot long clock on the side of a building in Union Square, NYC [photo: ClimateClock.world] to remind all of us that these crises exist and time is running out to act. The clock reads 7 years, 102 days, 12:02:01 hours. This amount of time is based on information in a report from the Intergovernmental Panel on Climate Change [IPCC], which states that starting in 2018 humans could release ~420 gigatons [billions of tons] of carbon into the atmosphere. This would still give us a 2/3rds chance of keeping planetary temperature increase to 1.5 degrees Centigrade. This is the stretch goal in the Paris Climate Accords.

Based on the rate at which we are burning fossil fuels, about 42 gigatons per year, these 7 years plus is the amount of time that remains to transform the global energy economy and move to 100% renewable sources of energy and to avoid the worst climate impacts.

Clocks such as this have gone up around the world from Paris to NYC to Berlin and more. According to their website one can also obtain a kit to build a clock for a classroom, university and/or hometown as well.

The financial markets appear to have begun to wake up to the risk of these climate crises. The Federal Reserve [FED] in March 2021 declared that “climate change increases financial stability risks.” The FED also established a Climate Committee to assess and manage this systemic climate risk. In addition the U.S. Securities and Exchange Commission [SEC] named its first ever Senior Policy Advisor for Climate and ESG [environmental, social, and governance] matters.

This new awareness may be just in time. In the period 1980 - 2020, there have been 285 severe weather events in the United States alone, costing more than a $1 billion each, with 15 the annual average number for the past 5 years. In total, the cost of these extreme events is nearly $2 trillion with over 14,000 deaths. Every U.S. state has had extreme weather events, according to NOAA [National Oceanographic and Atmospheric Administration]. Non-action is beginning to really cost us.

Let’s look at one country that is aware of the “Climate Clock” and its implications and is doing their part to address these climate crises. See photo of Denmark’s Prime Minister, Mette Frederiksen, [Credit: Emil  Helms/Ritzau Scanpix/AFP via Getty Images] on a boat outside Copenhagen, on April 22, 2021, with wind turbines in an off-shore wind farm in the background. She had just given a talk [YouTube] on Denmark’s plans for meeting its energy needs with renewable energy. 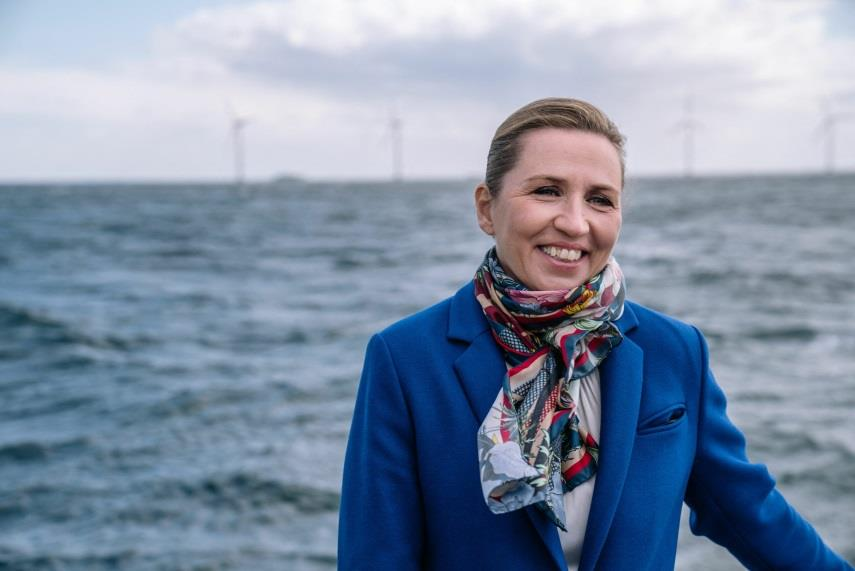 Denmark responded to the oil crises in the 1970’s with policies to decentralize its energy system, improve energy efficiency and in 1991, Denmark was the site of the first off-shore wind farm. In addition, “Denmark has shown how to integrate high levels of wind energy into a reliable electricity grid and do so in weather that is often extremely cold” [Paul Horn/InsideClimate News].

Please note the map of Denmark and surrounding area titled “An Energy Island” and let’s take a peek into Denmark’s renewable energy future. Their plan is to develop a wind farm that could eventually supply 10 gigawatts of renewable energy. When complete the project will cut their emissions by 70% from 1990 levels by 2030! 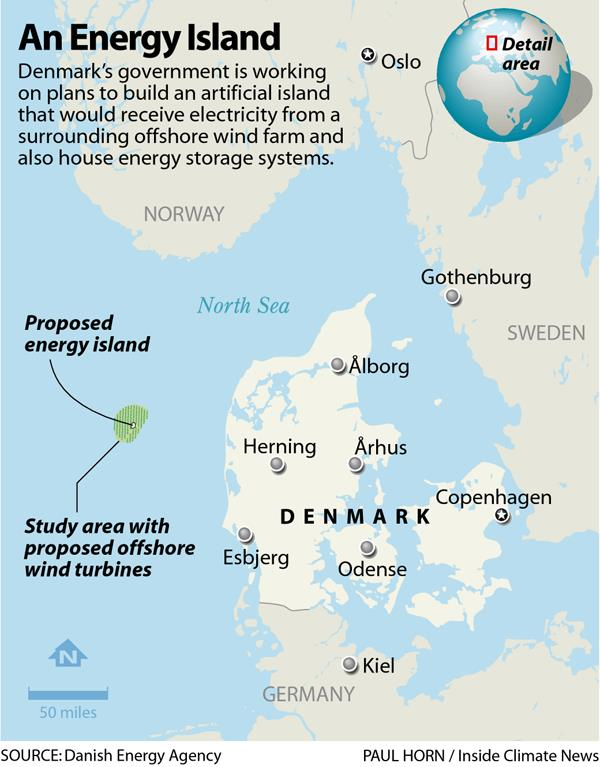 The project includes an artificial island that would be built in the shallow waters of the North Sea. It would house a battery bank to store and smooth out the power delivered, maintenance equipment and other logistical support. It would collect the power generated by hundreds of turbines using underground/water cables and distribute this energy both to Denmark and other grids in Germany and elsewhere. See photo from the Danish Energy Agency.

The focus here is on off-shore winds which are stronger and steadier away from land.

Another photo also supplied by the Danish Energy Agency shows what this island would look like. The large battery banks are to the left, with berths for maintenance ships and other vessels to the right. 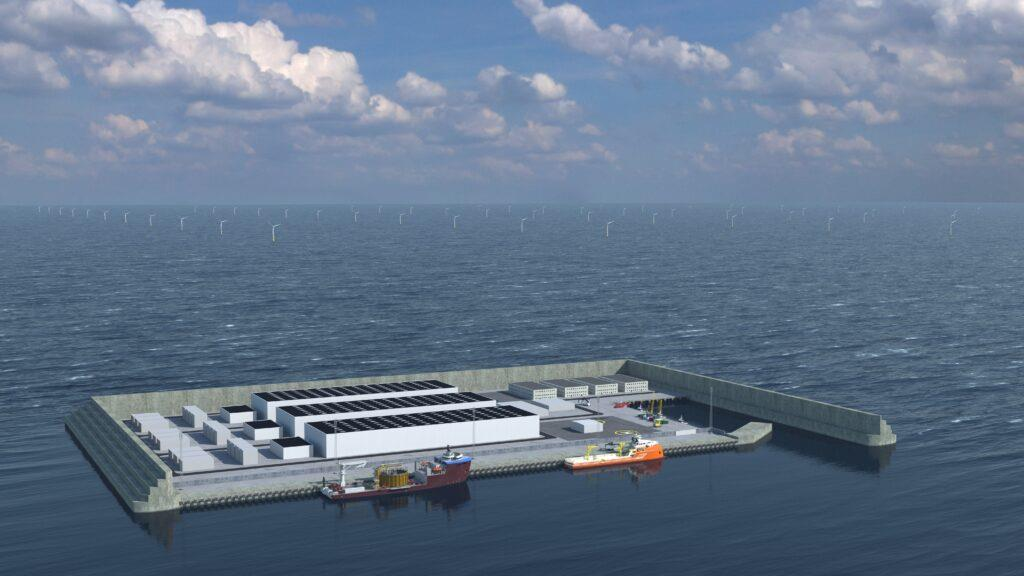 Currently Denmark leads the world in the share of its electricity that comes from wind with more than 50%. Lithuania is next with 39% and the U.S. with 7%. And, Denmark has passed laws to reach 100% renewable energy across all sectors by 2050.

Hopefully the current U.S. administration will do its part to meet the global GHG emission targets.