The word is finally out! And in front of over 70 million Americans no less. For the first time a responsible, senior, political leader told it straight. Former Vice-President Joe Biden said in the recent October debate that we had to “transition away from the oil industry.” He was acknowledging the science that climate change was real, happening now, and that carbon dioxide, a greenhouse gas [GHG] produced from the combustion of fossil fuels, was a primary culprit.

Mr.”Biden’s goal of net-zero greenhouse gas contributions by 2050 cannot be achieved without significantly curtailing the burning of oil and gas. Indeed, his proposal does not call for a ban on fossil fuels...” [The Washington Post October 27, 2020].

While the scientific community, and many leaders in Europe including the Vatican and elsewhere, are acknowledging climate change and taking steps to address it, America must re-join the fight against this global existential threat.

Even now, we all have been inhaling small particles produced from wildfires, or mega-fires, in California, Oregon, Washington, Colorado and elsewhere. Satellite photos show these clouds of smoke and particulates crossing the continental U.S., passing out over the Atlantic Ocean to Europe. We are all
connected to these extreme weather events.

Note vertical bar graph titled “The number of wildfires is increasing...” reflecting the extreme drought in the western U.S and increased temperatures there. The rising dotted line shows the average from 1985 to 2017 significantly increasing in number. 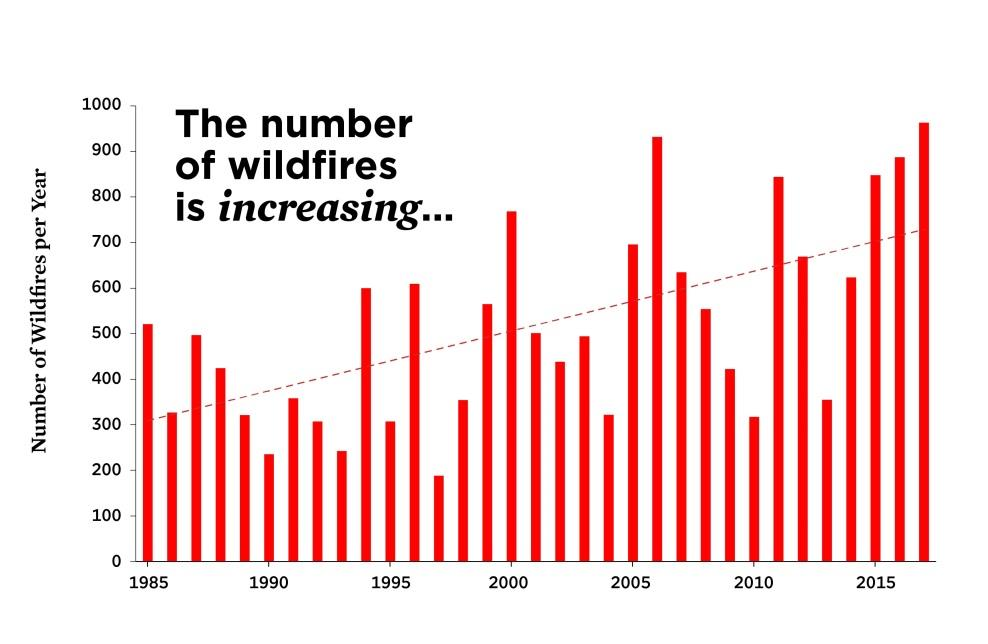 Even now, the 2020 Atlantic hurricane season, with almost a month to go [November 30], is likely to be one of the busiest years on record. So far, there have been 29 tropical or subtropical cyclones, 28 named storms, 11 hurricanes, and 4 major hurricanes. Having used the 22 usual letters in the alphabet, we are now into the 7 th letter of the Greek alphabet [Eta].

Note the satellite image of five of these storms simultaneously over the Atlantic Ocean in September 2020 [Wikipedia]. 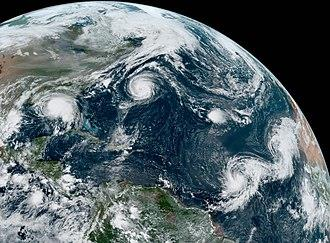 Five simultaneous tropical cyclones active in the Atlantic on September 14: Sally (left), Paulette (center left), Rene (center right), Teddy (bottom right), and Vicky (far right). The waves that would later spawn Beta and Wilfred are respectively located to the left of Sally and to the bottom-right of Vicky, and the extratropical cyclone that would later become Alpha is visible north of Rene.

Even now, the year “2020 is likely to be one of the (five) warmest years on record.” Notwithstanding, a La Nina climate event is underway that normally indicates a colder, stormier season [The Guardian, 29 October 2020].

There has been an average temperature increase of about 2 degrees F over the past 70 years. See the three graphs, “Shifting Distribution of Temperature Anomalies: Northern Hemisphere Land, June-July-August.” The first graph [of three] contains the measured temperatures for the period 1951 – 1980. For comparison purposes this is the baseline.

The second graph includes the measured temperatures for the period 1990 – 2000. Here the average temperature has a peak about 1 degree F higher than in the 1951 – 1980 graph. Note the increase in the number of warmer measurements [red] and the appearance of extreme heat [black].

The center of the curve or graph labeled 2009-2019 has moved further to the right, warmer by about 2 degrees F compared to the 1951 – 1980 period. Note here as well, the big increase in warm and extreme warm temperature measurements.

What is interesting is that segments of the business community are aware that a transition away from fossil fuels is underway and is reflected in a number of ways. “Tesla is now worth a General Motors plus a Honda plus a Ford, plus a Fiat Chrysler and a Daimler” [Forbes Jun 11, 2020]. While Tesla will make about 500,000 electric vehicles this year, these five companies combined manufacture about 8 - 10 million cars per year. What is the trend and future that the markets see and others do not? It seems pretty obvious the markets see a “Transition” away from fossil fuels to electrical vehicles and renewables, and that these older traditional companies will be left behind.

Electrify everything has become a buzzword in many forums. This includes cars, ferryboats [for vehicles and people], buses, trucks, delivery vans, cars, watercraft, lawnmowers, trimmers, chainsaws, leaf blowers, and more. Now we have a newer entry, [see photo courtesy of company] emissions-free, silent, all-electric passenger site-seeing boats on the Niagara River, the “Maid of the Mist.”

When it became time to replace the existing ferry fleet powered by oil, President and CEO of this corporation, Christopher Glynn, attended a conference in 2018 in Amsterdam, the Netherlands, on electric and hybrid marine propulsion systems. “Basically, I listened and learned. That conference opened my eyes to the attractiveness of electric propulsion.” 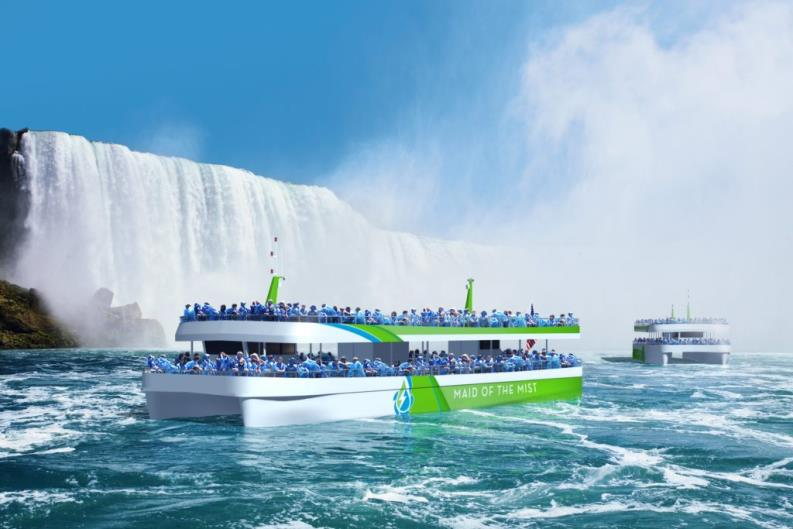 Inspired by these newer technologies Mr. Glynn and his team went to work and the boats went into service in spring 2020. And, they are now driven by electricity generated from the Niagara River itself.