Menu
You are here: Articles2012 ICSUSA ARTICLESDecember 2012 - Climate Change: Recent Past to Present

With satellites orbiting the Earth, thermometers and other instrumentation galore, scientists have no problem in recording our planet’s weather and assessing our changing climate. This time scale, however, is measured in decades for the satellites and perhaps 150 years for calibrated instrumentation. But for a full evaluation of Earth’s changing climate, these time intervals are relatively short.

From a variety of sources such as paintings, manuscripts and journals, historians know there was a warmer period called Medieval Warm Period [WMP] that lasted from about 950 – 1250. From similar sources there was an intermittent cooler period called the Little Ice Age [LIA] from about 1300 – ~1850.

But just how warm, or cold, was it relative to today?

Thus, instead of modern instrumentation, scientists probe lake sediments, tree rings, pollen types, ice cores, mosses, oxygen isotopes, and other information tucked away on or near our planet’s surface to get clues as to how Earth’s temperature has changed. More can be learned about these proxies by searching the Internet.

Let’s look at some recent data that gives us a glimpse of our climate over the past 2,000 years.

This graph is from a peer-reviewed paper in Science [Vol. 235, p.1236, 4 Sep 2009] by D. Kaufman et al. The Arctic is probably experiencing climate change faster than anywhere else on the planet. This 2,000 year dataset are from multiple proxy data distributed across the Arctic, above 60 degrees north latitude.

From this graph we can say; 1) a general cooling trend [straight line] took place over the first 1900 years, 2) a very strong warming trend started about 1900, and temperatures today are far warmer than anytime during the past 2,000 years. A hint of some slight warming [above line] did occur during the early MWP phase, and some uneven cooling did occur at times [below line] during the LIA.

This is one of many papers that have appeared since 1998 when Michael Mann first published data that shows current temperature levels are higher than anything in the proxy record for this timeframe. Many other publications since continue to support this original finding. 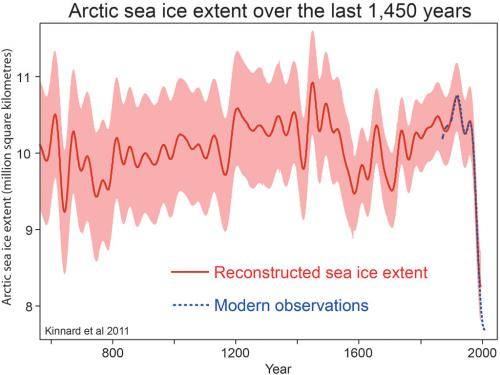 This graph was obtained from a variety of land proxies in the circum-Arctic region. This reconstruction, with high uncertainties in the early centuries noted by the width of the shaded area, shows there is about 2,000,000 square kilometers less ice today than any time in the past. [NOTE: one kilometer is equal to about 0.62 miles.] Clearly, there has been significant climate change, warming, in the past
century within that timeframe.

Now let’s look at another data set using sediment from salt marshes in North Carolina. But instead of temperature, and sea ice extent, this graph shows sea level changes [meters] off the coast of this state. 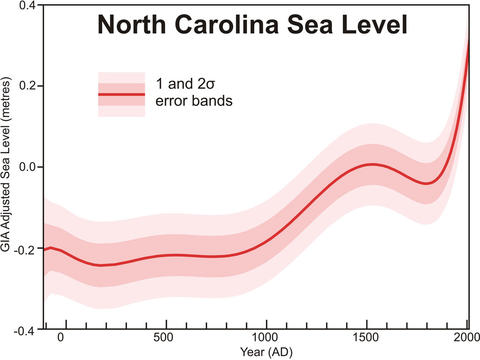 This data fits in very well with the earlier data. Note the basically flat portion of the curve starting in 100 B.C.E. to about 1000. The curve then begins to rise which corresponds to the start of the MWP, levels off at about 1400 during the LIA, drops some during this cooler spell, and then rises steeply again in the current time. This sea level rise comes from ice melt as well as the expansion that occurs as water warms.

All these data are consistent with the fact that the current warming is without parallel for the past 2,000 years and outside of the normal variability.

And there is still more information; lots more. A final point to be made here is a recent paper in Geology [v. 40; p. 1003-1006; November 2012.] It reports the “reawakening” of the world’s northernmost lake in north Greenland at 83 degrees 37 minutes north latitude that occurred in the last 90 years. Without a biological fingerprint for more than 2,000 years, algae have now returned and a diverse community established there.

The warming today is unlike anything the world has seen for at least two millennia.