Menu
You are here: Articles2011 ICSUSA ARTICLESOctober 2011 - The Chemistry of Planetary Atmospheres and Implications for Earth’s Climate

On September 23, 2011 the Sun’s rays were directly over the Earth’s equator. When this occurs in Fall, it is called the Autumnal Equinox and we have days and nights of about equal length. The diagram illustrates this. This time of year with longer nights gives one an excellent chance to observe the planet Venus in the night sky. Venus, also called the morning or evening ‘star,’ is the brightest natural object in the night sky. 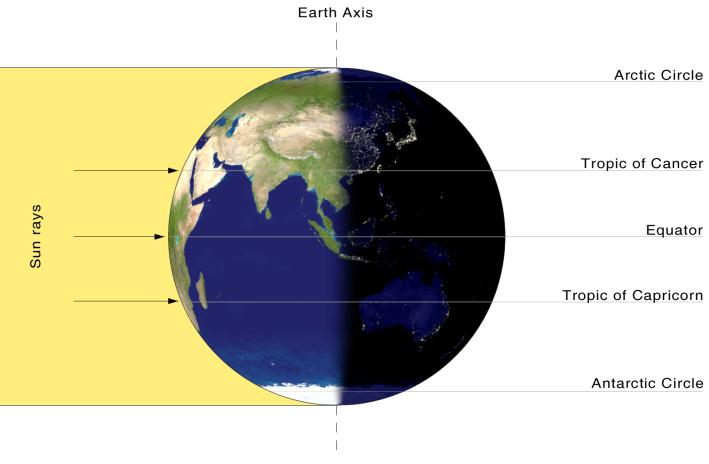 Often Venus can be seen with a fainter nearby planet, Mercury. One can consult a newspaper or the WEB, to find the date and direction to observe this pair, as is seen in the diagram from Spring 2011.

OK, so what is the connection here with Climate Science? 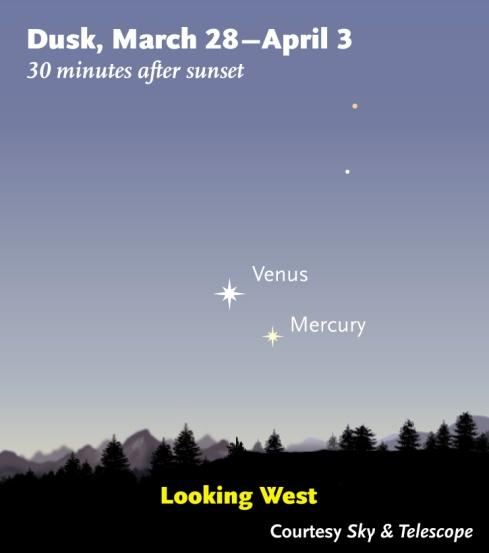 Ground based telescopes and two space probes have given us some data on both of these planets.  Mercury, the closest planet to the Sun, was found to have no significant atmosphere and to have a surface temperature that ranged from about 152 – 800 degrees Fahrenheit [F] depending on location and time of day. Sun rays warm the planet by day and infrared radiation carries it away at night.

Venus, by comparison, is about twice as far from the Sun as Mercury and has a very dense atmosphere.  This atmosphere acts to keep the surface temperature more uniform, at a toasty 890 degrees F.

We have a planet that is many tens of millions of miles further from the Sun than Mercury, yet it has a higher surface temperature that is warm enough to melt lead. So what is going on?

While the geology and chemistry of the surface of Venus may be complex, the atmosphere is relatively simple. It is more than 96.5% carbon dioxide. Venus has no carbonate rock, like in the Champlain Valley, or liquid water, that can store the carbon dioxide. It is thought that almost all of the carbon on the planet is present in the atmosphere as carbon dioxide. Venus has a pronounced “runaway greenhouse” effect. This is the same greenhouse gas [GHG], the rising levels of which, concerns climate scientists today.

There is no evidence to suggest that Venus’ experience may happen on Earth. The important fact is that this GHG traps and absorbs infrared radiation, which would normally be emitted to space, and warms the planet. We are seeing ample evidence of this on Earth today.

The global warming occurring is being felt most strongly at the higher latitudes where seasonal temperatures in some areas are up to 8 degrees F above the long term averages. The resulting loss of ice cover is having a major impact on the marine species in the Arctic.

A recent article in the Vancouver Sun paper is just one example. Two separate and distinct populations of bowhead whales exist in North America: one along the Atlantic coast and one on the Pacific coast. They have been separated for many thousands of years by ice in the long closed Arctic Ocean Northwest Passage corridor. 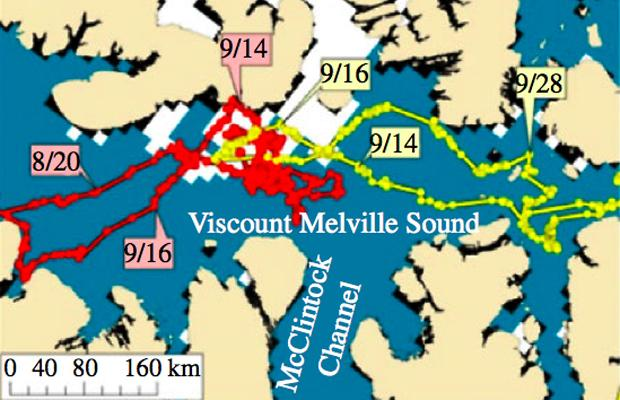 The article discusses the results of research by a team of Danish and American scientists published in the latest edition of Biology Letters, September 28, 2011. The team tagged an Atlantic bowhead off the west coast of Greenland with a satellite transmitter in April 2010 and then tagged a Pacific bowhead off the north coast of Alaska in May 2010.

The map shows the route [Atlantic whale, yellow, entering right: Pacific whale, red, entering left] taken by both whales over a one month period in the central Canadian Arctic. The two whales crossed each other’s path on several occasions. Until the last few years this area has been solid sea ice and this would not have been possible.

Other marine and microbe exchanges have also recently been documented, as a result of the warming and the loss of sea ice. The full impacts are still not completely known, and the research continues.