In 2013 the United Nations-sponsored Intergovernmental Panel on Climate Change [IPCC] completed
the review of all of the new evidence from peer-reviewed literature on the subject of climate change. It
last did so in 2007 and, at that time, published its Fourth Report: “Climate Change 2007: The Physical
Science Basis.”

On September 27, 2013, the IPCC released a 36 page “Summary for Policymakers” of its Fifth Report.
The Summary is free and available on the web [www.ipcc.ch/]. In October the full on-line version of the
report became available; it contained over 2,000 pages of data, graphs, charts, references and
interpretations from the combined efforts of hundreds of climate scientists working in the field.

The IPCC is a consensus document and all 195 nations had to agree with every word in the findings. The
summary, in part, is quite clear: “Warming of the climate system is unequivocal, and since the 1950’s,
many of the observed changes are unprecedented over decades to millennia.” The probability of
certainty has increased from 66% in 2001, to 90% in 2007, to 95% in 2013.

Two of many climate assessment illustrations from the IPCC Report highlight the findings. The bar chart
summarizes the average temperatures for each of the past 16 decades for which actual thermometer
data are available. It is labeled “Average global surface temperature, with confidence range.” The data
clearly show that each of the past three decades is warmer than the proceeding one. 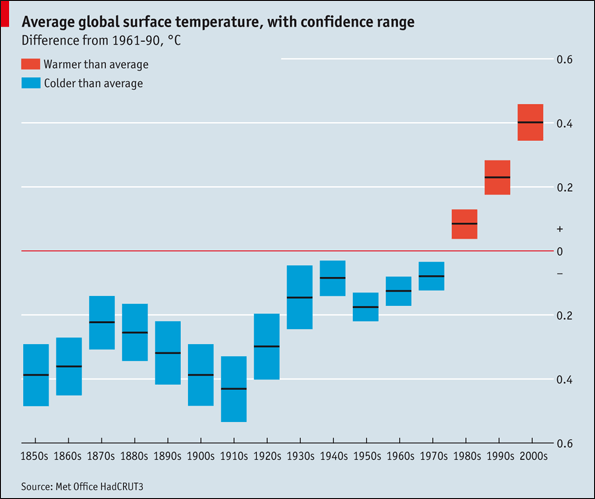 The second illustration is titled “27 Years of Above-Average Temperatures.” The individual bars
represent a year for each of the past 60 years. Again, the data clearly show the upward global
temperature trend since the 1950’s.


There are more data and conclusions in the report; they include rising carbon emissions anticipated as
developing countries use more energy, rising sea level, rising ocean temperatures, increasing ocean
acidification, reduction in snow cover, more extreme weather events, reduction of global ice mass and
extent, and so on. All of these trends are supported by data with references.

More and reports are coming forward about serious and significant attempts to address these climate
issues. They all discuss ways to reduce the emissions of GHG’s and to reduce the use of fossil fuels.

Country leaders in this effort include Germany, England, Denmark and others that are pursuing
renewable energy programs to make them carbon neutral by ~2050. Some states such as Iowa,
California, New York and several others all have targets to have renewables meet up to 20% or more of
their energy needs over the next few decades.

Indeed, the town of Sebastopol in California now requires in its building code that all new homes
incorporate renewable energy built into the structure. 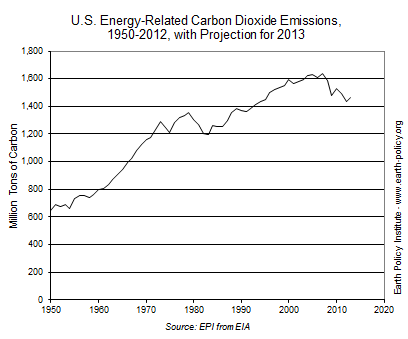 The story is compelling. The reduction of this particular GHG in recent years is significant. While some of
this is probably due to the “Great Recession”, other contributors include significant solar and wind
installations, a decrease in coal burning energy sources, a gain in market share of hybrids, EV’s [electric
vehicles], smaller fuel efficient vehicles among others.

Enormous changes are occurring in the area of electricity generation, a major source of GHG’s. The
graph labeled “Cumulative Installed Wind Power Capacity in the United States, 1980 -2012” tells a
powerful story of “change.” It was produced by Earth Policy Institute.

Most of this installed capacity was done without any national policy or encouragement. Fossil fuel
subsidies still exceed by a wide margin any subsidies for renewable energy.