Menu
You are here: Articles2014 ICSUSA ARTICLESJuly 2014 - Is the “Handwriting on the Wall” for Coal? Perhaps.

Is the “Handwriting on the Wall” for Coal? Perhaps.

The phrase “the handwriting on the wall,” or some similar version, may have come from an Old Testament story some 2500 years ago that foretold the fall of Babylon to Persia. Babylon did fall in 539 BC but the exact historical records beyond that are less clear.

We do know that the carbon dioxide molecule has the inherent property of absorbing infrared radiation that would normally be emitted into space. We also know that the largest contributor of carbon dioxide to our atmosphere, that is helping bring about climate change, is from the combustion of coal to produce energy. Because of this impact and its effect on human health and the environment, many
governmental and regional entities are phasing out its use.

In the June 1 Press Republican Climate Science column, we read that the province of Ontario would complete its phase-out of coal combustion by the end of 2014.

In mid-June 2014, GDF Suez Energy Generation North America announced the shutdown of the Mt. Tom power plant in Holyoke, Massachusetts by October 2014. As scheduled, earlier in June, the Salem Harbor Power Station closed, leaving only the Brayton Point power plant in Somerset scheduled to close in 2017.

This signals the end of decades of burning coal for electrical power generation in MA.

Note the graph from the US Energy Information Administration that shows the reduction in electrical energy generation by coal over the past 6 years in MA from 10,629 to 4,052 [thousand megawatt hours].  The use of natural gas is one of several factors helping bring about this change. 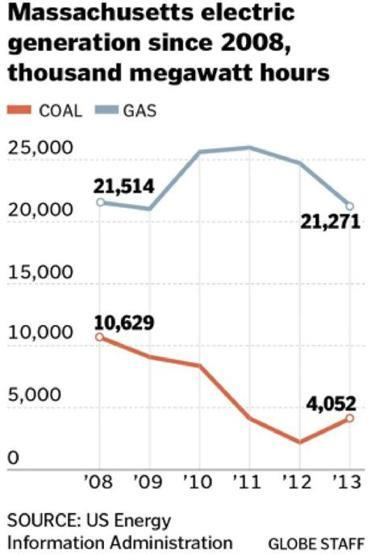 Other changes are also happening. The Texas utility, El Paso Electric with over 400,000 customers, announced in June that by 2016 its electricity mix will be free from coal. It has doubled its utility-scale solar portfolio in less than one year.

The company has entered into a long term power purchasing agreement [PPA] with the very large Macho Springs solar plant in New Mexico [see photo of large-scale photo array]. It will buy the solar power for 5.9 cents/kilowatt hour [kwh] which is less than half the 12.8 cents/kwh for electricity from new coal plants according to Bloomberg [thinkprogress.org/climate/2014/06/17]. 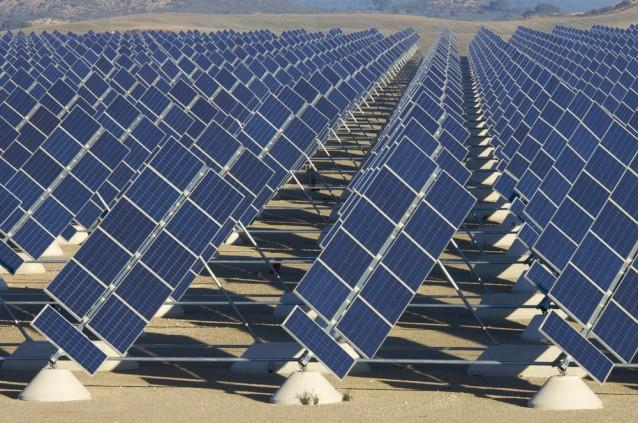 And, there’s more. Renewable energy sources, primarily wind and solar, made up more than 90% of new installed electrical power capacity for the 1 st quarter of 2014. Natural gas made up the rest [Federal Energy Regulatory Commission.]

Let’s look at the bar chart here. The bottom color-coded labels read, from left to right, “Residential”, “Non-Residential” and “Utility”. Each vertical bar represents solar installations by quarter, from Q1 2010 to Q1 2014 and consists of the three components listed above. The units on the left axis are “Installations (MWdc)” or megawatts direct current. What is remarkable is the rapid growth from each
quarter to the corresponding quarter in the following year. For example Q4 2010 went from 349 installations to 794 in Q4 211, and then to 1,313 in Q4 2012 and 2,108 in Q4 2013. This representsalmost a doubling every year with the largest growth in “Utility” systems; from the Q1 2014 Report, U.S. Solar Market InsightTM . 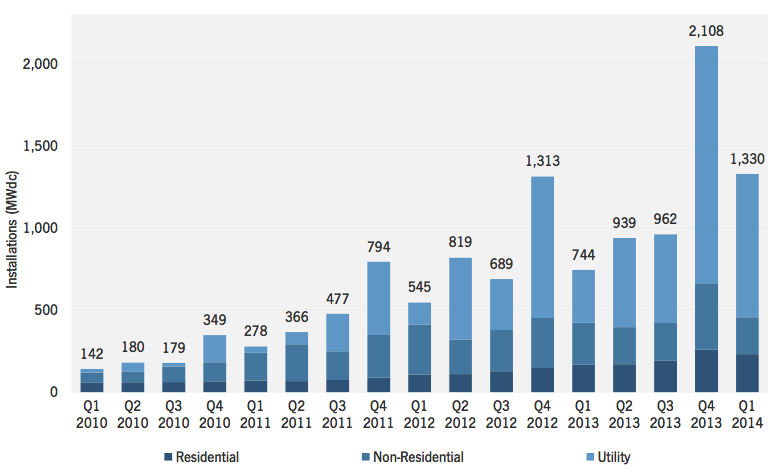 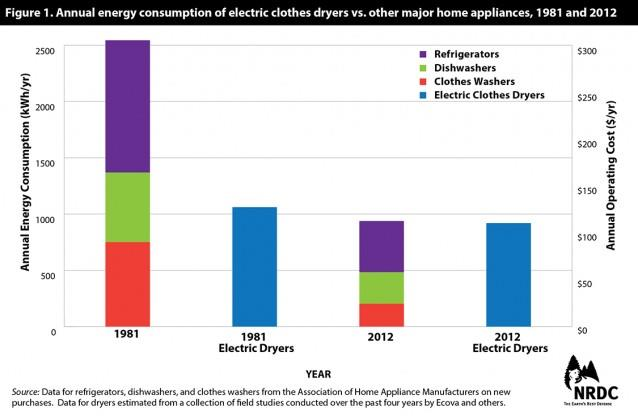 Comparing the 1981 energy consumption for “Refrigerators”, “Dishwashers” and “Clothes Washers” with 2012 shows a 50% plus reduction in “Annual Energy Consumption.” Unfortunately, a similar comparison for “Electric Dryers” shows very little change.  Apparently regulators have focused on other appliances.

Since the 1970’s, U.S. efficiency requirements have been updated seven times for refrigerators which have more than halved their energy use. Standards for dryers have been updated only three times with each one modest. This wastes about $4 billion of consumer’s money per year.

In January 2015 vented dryers will face a new efficiency standard, with another standard likely in 2017, according to Kathleen Hogan of the Department of Energy.

Finally, a Utah utility has entered into a 20 year PPA for solar power because it’s the cheapest option.

The hand writing for coal may be on the wall!