One of the central questions in climate science has been: “is the climate warming?” While the considered answer has been “Yes” for many years, the way science works is that prior conclusions are always challenged when new data are acquired. Let’s look at 2012 and some recent temperature data for the 48 contiguous states and see how that fits with earlier data. 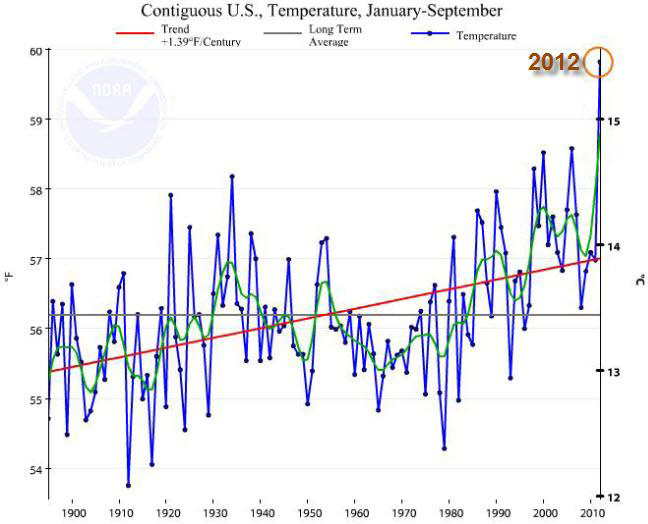 The graph here from the National Climate Data Center [NOAA] tells an interesting story. The nine month [Jan – Sept] average temperature data since 1895 were used in order to see how 2012 compares. The data show a clear upward “Trend” [solid straight line] of about 1.39ºF per century. The left hand axis shows this change from about 55.5ºF to almost 57ºF. The right hand axis is in degrees centigrade.

As we can see the data for 2012 are almost off the chart and far higher than any measurements in the last 117 years.
What is also interesting is the up and down annual temperature changes over this period of time. This is the normal “weather” variation we see on a month to month or year to year basis. This is why climate scientists look for data over longer periods of time in order to arrive at a better understanding of what is going on.

Another aspect of climate science is to evaluate how this information dovetails with other data. The information on minimum ice volume data in the Arctic also supports that warming is occurring.

The bar chart here is based on data from University of Washington PIOMASS project and plotted by L. Hamilton of University of New Hampshire. It shows data from 1979 to 2012 as measured in September when ice is at its minimum. The results are almost startling as the drop in ice volume seems to be accelerating and is only about 1/5th the amount it was 33 years ago.

Another aspect of the science is that it takes an enormous amount of energy to melt this much ice. This phase change, from solid ice to liquid water, requires a lot of energy. Some of the energy for this process is coming from the extra heat in our atmosphere as a result of the enormous amount of greenhouse gases we have emitted.

Thus in a real sense the melting of Arctic ice is helping to hold down the atmospheric temperature increase.

Locally, some data was recently published by the Lake Champlain Basin Program. The LCBP is managed by VT and NY with technical input from many local organizations including those in Quebec. The Basin Program Manager, Dr. Bill Howland, presented the 2012 Report at the recent Lake Champlain Committee annual meeting in October.
This report, page 32, [www.lcbp.org] states, “Average August surface water temperatures have increased in Lake Champlain as much as 6.8ºF [3.8ºC] since monitoring began in 1964. Additionally, the average air temperature in the region increased by 2.2ºF [1.2ºC] from 1976 to 2005.”

Let’s move from the physical sciences to the business side and see what decisions and data are coming from here. Munich Re is a major reinsurer of other smaller insurance companies. They have just completed a 274-page report, “Severe weather in North America“. It draws on “the most comprehensive natural catastrophe database worldwide.” “For the first time it links the rapid rise in North American extreme weather catastrophes to manmade climate change” according to “ThinkProgress.”

Note the bar chart from that report, “Figure 2: Natural catastrophes in North America 1980 – 2011: Number of events”. There are four segments to each of the annual vertical bars as indicated: the small and fairly consistent contribution at the bottom of each bar is from Geophysical events [volcanoes, earthquakes, tsunamis]. This makes sense since one might expect these events to be largely random and similar from year to year.

The top three segments of the vertical bar are all weather related events. These include severe thunderstorms, heavy precipitation, flash floods, hurricanes, heat waves, droughts, and wild-fires. Note the almost tripling of the total number of these events in 30 years.

All this data, and more, are consistent and fit together: climate change is occurring and our planet is warming.