Menu
You are here: Articles2018 ICSUSA ARTICLESMarch 2018 - Coal: Are We Beating a Dead Horse?

Coal: Are We Beating a Dead Horse?

A recent ADK 46er newsletter had an interesting story titled, “The Dead Horse Theory.” It apparently is derived from the wisdom and oral history of the American Plains Indians that goes like this: “When you discover that you are riding a dead horse, the best strategy is to dismount.”

In today’s parlance in D.C. policy circles the strategy might be, “Buy a stronger whip,” or “Change riders,” or “Appoint a committee to study the horse.”

This leads to a discussion about coal. Again.

[Observation 1: When Florida, is colder, 38 degrees, on January 2nd, than Anchorage Alaska, 44 degrees, something unusual is going on.]

Observe the bar chart, “U.S. utility-scale electric generating...” . There is a lot of information here but we will only focus on the bottom portion [in black] of each vertical bar which identifies planned retirements of coal burning plants. In 2015 about 15 gigawatts, 2016 about 8, and in 2017 about 6 gigawatts of coal plants were retired. 2018 looks to be a banner year: the planned closure of ten big coal burning power plants totaling about 13 gigawatts. This information is from the Energy Information Agency [EIA].

The graph “Figure 4: Energy-related CO2 emissions by sector” from EIA and shows the GHG emissions of four major sectors of the economy. Note how the top curve, “Power” reached an emissions maximum of 225 million metric tons in 2007-2008. It has been on a downward trajectory since as the U.S. moved away from coal and to natural gas and renewables. “Transportation” is now the largest source of GHG emissions.

In 2000, coal burning plants provided more than 50% of the U.S. electricity needs: in 2018 it will be less than 30%. This is a huge change or disruption in our infrastructure and economy in such a relatively short period of time. See Bar Chart, “U.S. Electricity Generation By Fuel Type”.

Many forces are responsible for this transition. The amount supplied by renewables has doubled from 9% to 18%, the need to reduce toxic pollution of our air and water [mercury], and the reduction of greenhouse gas [GHG] emissions that contribute to climate change.

Additionally, human health agencies want a reduction in small air-bourne particles from burning fossil fuels that cause cardiovascular disease, lung-cancer and childhood asthma. The availability of cheap natural gas and the falling prices of renewables [wind and solar] also contribute to this transition.

According to “Alex Gilbert of the research firm SparkLibrary”, “Coal in the U.S. might not be dead, but it is in a death spiral.

Other countries are accelerating the replacement of coal burning plants. The United Kingdom announced a “Coal Phase-Out Plan” in January 2018. It includes the planned closure of its 8 remaining coal powered generating stations by 2025.

Alberta, Canada, is also in the news. This province with the third largest oil reserves in the world, announced in December 2017, a successful auction of renewable energy projects. Originally targeted at 400 megawatts [MW], bids for 595 MW of renewable energy were received with all units to be built within the province. Although Alberta is Canada’s largest consumer of coal, their goal is to transition to all renewables and gas-fired generation by 2030.

And how about China? It is reassigning 60,000 soldiers to plant trees and create forests in northern border areas! Their goal is to plant 32,400 square miles of trees this year that will sequester carbon dioxide. [See photos of troops, China Photos/Getty Images; and tree, saytrees.org]. 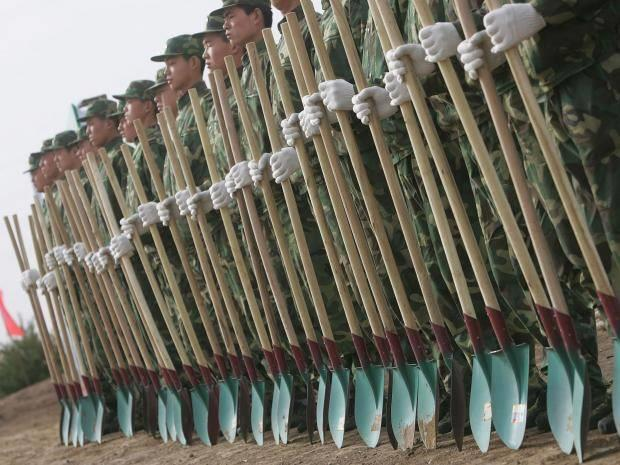 Jennifer Francis, a climate scientist at Rutgers University, thinks that the loss of 2 million square kilometers of ice in the Arctic Ocean allows more solar energy to be absorbed. This extra heat then brings changes in the jet stream [polar vortex] resulting in these large and rapid temperature changes.

Kevin Trenberth, a climate scientist at the National Center for Atmospheric Research, is not so sure and thinks these extreme occurrences may be the result of the warming in the tropics and subtropics.

Climate change is a lively and dynamic science and nature is slowly sharing its secrets.