Menu
You are here: Articles2014 ICSUSA ARTICLESJanuary 2014 - Solar: One of Many Renewable Solutions for Our Energy Needs

Solar: One of Many Renewable Solutions for Our Energy Needs

The climate change issues we face today are caused in large measure by the production of carbon dioxide from the burning of fossil fuels. Our civilization requires lots of energy, and needs more, to meet the needs of 7.2 billion plus inhabitants of our planet.

Solutions do exist, however, and we need to be aware of all the options before us. The energy requirements we have now, and will have in the future, could be met by renewable sources. The illustration titled “Renewable Energy Potential vs Current Energy Use (yearly)” deserves a lot of attention and discussion from both citizens and policy-makers alike.

The focus of this discussion will be on solar energy.

The circles within the large circle in this illustration [courtesy of Our Clean Energy Future] tell a remarkable story which we will get to in a moment. Note the small circle to the left of the large circle, labeled “World Energy Use.” It shows that world energy use amounts to about 16 terrawatts (TW). That is a big number and represents a lot of energy! As a matter of fact the number can be written as 16
followed by 12 zeroes, or further expressed as 16 trillion watts. Note: All energy units are in energy per second. 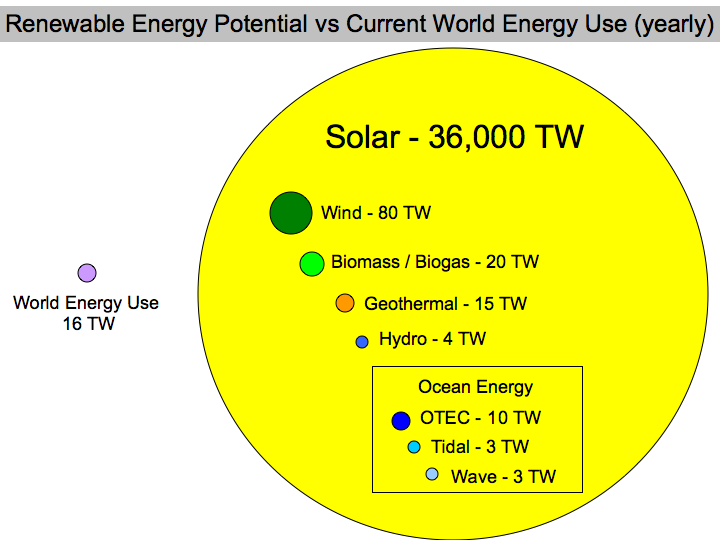 Now let’s focus on the very large circle. The large number near the top after “Solar” shows that about 36,000 TW of power could be captured by land based solar power generation. This solar power is more than 2,000 times the amount of energy the world currently requires.

Within this large circle is a series of smaller circles that indicate the energy potential of a variety of other renewable energy sources. These include “Wind”, “Biomass/Biogas”, “Geothermal”, “Hydro” and so on.

It should be noted that these TW energy estimates are approximate and different studies may produce data that differ. The data are intended to give a rough idea of relative scale.Now let’s look at just the first 4 circles starting with “Wind - 80 TW.” These data suggest that wind energy alone could meet our current energy needs by a factor of five. Similarly, “Biomass/Biogas – 20
TW,” and “Geothermal – 15 TW,” could each meet virtually all of our current needs. The “Hydro – 4 TW” quantity, while significant, is insufficient to meet more than about one-quarter of global needs.

The rapid growth rate in “Installed Capacity [MW]” of photo-voltaics can be seen in the bar chart labeled “New U.S PV Installations” [cleantechnica.com]. For comparison purposes, in 2013, more than 4,000 megawatts [MW] of PV were installed, about equal to the output of four nuclear reactors. 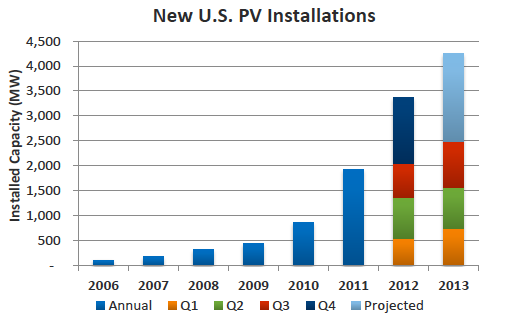 See the pie chart “New Electric Capacity” for October 2013 where 99% of our new power comes from renewables. 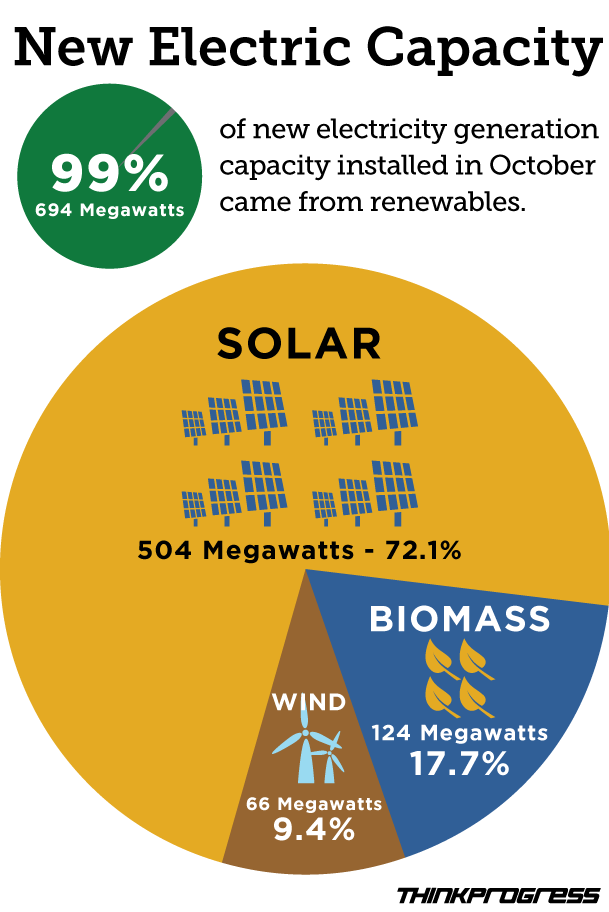 The news gets even better. In March and November 2013, 100% of new power capacity in the U.S., came from renewables.Meanwhile, according to NASA, November 2013 is the warmest November on record.

This 400 year old poem has a rhythm and meaning that still has relevance today.

No man is an island,
Entire of itself,
Every man is a piece of the continent, A part of the main.
If a clod be washed away by the sea,
Europe is the less.
As well as if a promontory were.
As well as if a manor of thy friend's
Or of thine own were:
Any man's death diminishes me,
Because I am involved in mankind,
And therefore never send to know for whom the bell tolls;
It tolls for thee.
John Donne 1572-1631

Errata: Thanks to a reader comment, the last paragraph in the December 8, 20013 article on Climate Science should have read as follows: “Since 1997 production tax credits for wind have lapsed several times but some installed wind capacity did benefit. It should be noted however, that according to an International Monetary Fund Report dated January 28, 2013, global fossil fuel direct subsidies for coal, oil and gas were worth $523 billion for 2011, compared to $88 billion for renewables.”