Menu
You are here: Articles2015 ICSUSA ARTICLESMay 2015 - Can One-Half Trillion Dollars Evaporate? Coal and Fossil Fuel Based Investments Can

Can One-Half Trillion Dollars Evaporate? Coal and Fossil Fuel Based Investments Can

The direct answer to this is “yes.” The Economist magazine in October 2013 detailed the “existential” issue that fossil fuel plants in Europe face as the nature of the power generation changes dramatically.
Since 2008 the value of the largest 20 energy utilities in terms of stock price has decreased more than one-half trillion dollars.

In particular, E.ON, Germany’s largest utility, has seen its share price drop by three-quarters since its peak, and its income from fossil fuel and nuclear power generation has decreased by one-third since 2010. The chief  financial officer stated, “Conventional power generation, quite frankly, as a business unit, is fighting for its economic survival.”

Since 2008 “the Morgan Stanley index of global share prices” show that “utilities have been the worst-performing sector” in the market. At that time “the top ten utilities in Europe all had credit ratings of A or better. Now only five do.”

Is this the result of Obama’s “war on coal”? Hardly.

So what is happening?

A combination of “market forces,” an awareness of the “social costs” of fossil fuel combustion, and newer and cheaper renewable technologies appear to account for this amazing transformation.

Individual investors, hedge funds, pension funds and banks do not see coal as a suitable financial investment. Indeed a February 2015 publication by Merrill Lynch states, unequivocally, “The current energy path is  unsustainable.” Their position even goes beyond coal and they say, “... this process [transition] needs to occur through a combination of energy-efficiency improvements and gradual replacement of oil and other fossil fuels.”

Indeed, in early March 2015, the nation’s seventh-largest bank in the U.S., PNC Financial, disclosed that it would no longer finance coal-mining companies that pursue mountaintop removal of coal in Appalachia. This was a major shift for PNC since they were one of the largest financiers of companies involved in this practice.

The momentum for this transition continues with the announcement on March 11, 2015 by the governing body of London UK, that they pull City Hall’s ~ $7.2 billion pension fund out of coal, oil and gas investments. This vote, and motion, is now in the hands of the Mayor to consider and write a response.

The costs that we incur on our conventional energy path also appear in other ways. The graphic image here from NOAA titled “U.S. 2014 Billion-Dollar Weather and Climate Disasters” is a case in point. While individual weather events cannot be said to have been “caused” by climate change, what can be said is that all weather events are influenced by our changing climate. The extra energy and moisture in our atmosphere as a result of increasing greenhouse gas concentrations makes normal storms stronger and more extreme.

The NOAA image highlights the “Drought”, “Severe Weather” [extreme rainfall, hail and wind],  “Tornadoes and Flooding”, and “Winter Storm” events that were all billion dollar or more weather events in 2014. Severe weather is beginning to cost us.

But the numbers globally for billion dollar losses are increasing significantly too. [See Figure A: Global disaster losses from 1980 – 2012; from the World Bank].

This same report details costs of $3.8 trillion dollars in natural disasters since 1980. Using data from Munich Re, the world’s largest reinsurance company, the World Bank report finds that about 74% of these costs arise from weather related disasters. They also report “that annual costs are on the rise, from around $50 billion a year in the 1980’s to about $200 billion a year now.”

Climate change is really beginning to cost, in dollars, the economies of the U.S. and the rest of the globe.  The personal and human costs are incalculable. 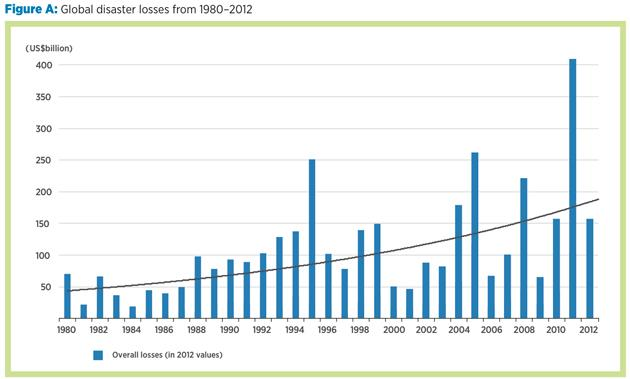 The satellite photo of Super Typhoon Haiyan, taken at night from about 25,000 miles away in space on 11/7/13, as it approaches the Philippines, has almost a sinister look to it. The black dot of the “eye”, surrounded by swirling winds and clouds, turned out to be one of the strongest storms ever recorded. 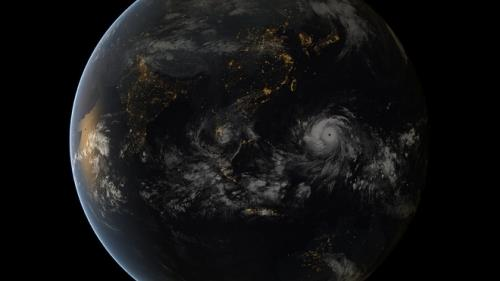 The costs of continued combustion of fossil fuels, with their resultant emission of huge quantities of carbon dioxide, are becoming obvious and the financial markets are behaving accordingly.