The planet was a very different place about 3 million years ago. The geologists call this period in Earth’s history the Pliocene Epoch [5.3 million to 2.6 million years ago]. At that time the isthmus in Panama that now connects North America with South America was still in the process of closing and no canal would have been needed to pass in either direction. The continents were still nudging about and had not arrived at the positions that we know today.

The temperatures were about 4 to 5.5 degrees Fahrenheit [F] warmer than today.

The oceans were about 80 feet higher as well.

Also, the carbon dioxide levels then were about 400 parts per million [ppm].

The level of this major greenhouse gas in the atmosphere would not be seen again for 3 million years; until early May 2013 that is.
The graph labeled “Carbon dioxide concentration at Mauna Loa Observatory”, earlier versions of which have been appeared here, reflects these recent rising levels over the past 55 years. Two data sets, one from NOAA and the other from Scripts Institute, agree to within 0.1 ppm. 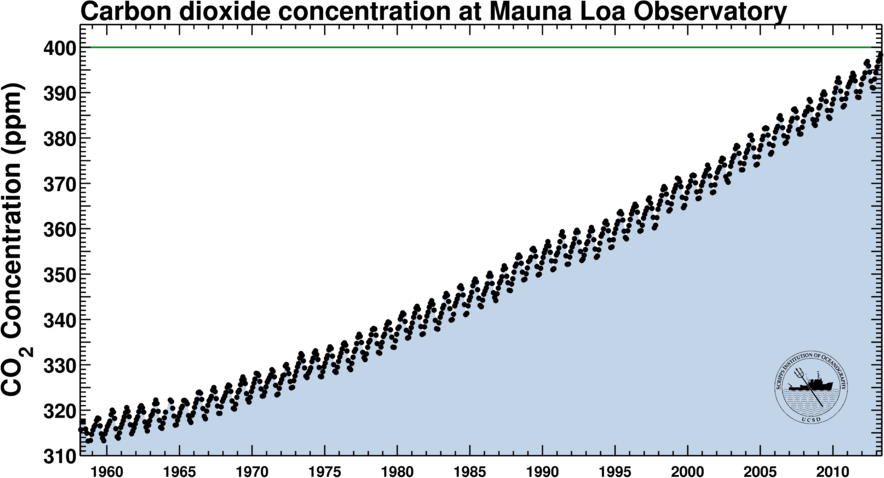 Now let’s extend this time period back some more. Another graph plots the carbon dioxide levels [vertical axis] during the current interglacial or about 12,000 years [horizontal axis]. It indicates how relatively constant these levels have been until 1900 when they began to rise. The 2012 level is indicated and then the line is extended upward assuming that with current emission rates, and “business as usual”, what the levels will be in 2100. 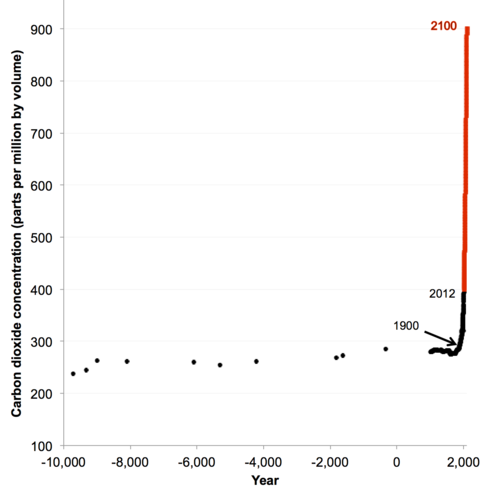 But now let’s look at some long term data. How does today’s carbon dioxide level of 400 ppm compare with the levels over the past 800,000 years? See the graph titled “Ice-core data before 1958.” These data were obtained from Antarctic ice cores and show that the levels ranged from a low of about 180 ppm, during the periods of peak glaciations, to a high of about 280 ppm during the interglacials or warm periods, like the one we are in now. Note on the far right side the abrupt sharp vertical increase in the carbon dioxide levels of today.

The changes that we now see in the atmospheric composition are unlike anything seen in the last 800,000 years. One would have to go back to the mid-Pliocene about 3 million years ago to see carbon dioxide levels as high as today. 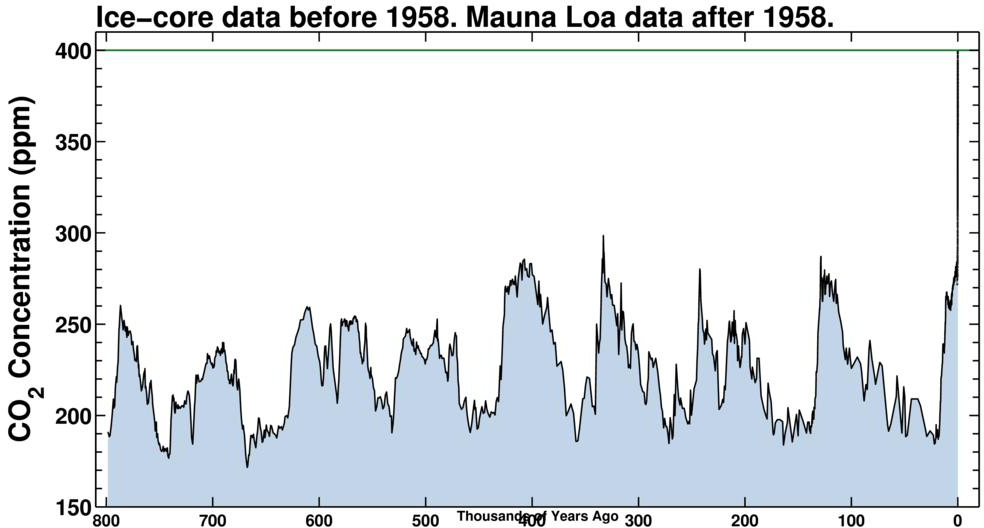 Thus all these data sets looking at different and longer segments of time come to the same conclusion: we are changing the composition of Earth’s atmosphere and we can expect that climate change will occur.

A quote from the French physiologist, Claude Bernard, in 1865 seems to fit today’s contrarian climate: “It is better to know nothing, than to keep in mind fixed ideas based on theories whose confirmation we constantly seek.”

As much as the fossil fuel industry may try to mitigate these data and concerns, many businesses in the U.S. and others globally, are seeing a huge business opportunity. They recognize that a big shift from fossil fuels will have to be made soon as we move into a post-carbon economy. They are investing billions of dollars in renewable energy. One segment that is growing particularly fast is “wind power.”

Investments in wind turbine technology have enabled huge gains in efficiency to the point where wind power can compete with traditional fossil fuels in many parts of the country and in many markets.

The graph “Average Levelised Cost Of Onshore Wind 1984-2012“, is from Bloomberg. The log axis scales here are important to better illustrate the data. It shows the continual decrease in wind turbine costs, with a 29% drop since 2008 alone.

Consider this: in first quarter 2013, 82% of new U.S. electrical generating capacity consisted of renewables with wind comprising about 2/3rds of that total. The results would have been even higher had Congress resolved the ‘fiscal cliff’.