Menu
You are here: Articles2014 ICSUSA ARTICLESAugust 2014 - “The Wind of Change is Blowing.....” Climate and Energy

“The Wind of Change is Blowing.....” Climate and Energy

“The wind of change is blowing through this continent. Whether we like it or not...” This quote is from a now-famous speech by the British Prime Minister Harold Macmillan in February 1960 in Cape Town, South Africa. This phrase was first spoken a month before in Accra, Ghana, and it started the decolonization of British rule in Africa, and elsewhere.

Later, in 1991, this same phrase was used in a song by the “Scorpions” in Europe where people could dream “about the change the world will get after the cold war ended,” and words like Glasnost and Perestroika were in the air.

Arguably, today we are also in a period of momentous change as our civilization slowly makes the conversion from mostly fossil fuels to renewable energy. 34 National Academies of Sciences, in as many countries, and 197 Scientific Organizations around the world, recognize the peril of continued, enormous increases in carbon dioxide emissions from fossil fuels, and the impact it will have on civilization as we know it. Indeed these greenhouse gas emissions are impacting Earth’s Climate today and will continue to do so for centuries to come. Hence the urgent need to move forward with this transition.

In science it is data that guides one’s understanding of what is happening on Earth. And we have data from many sources. With this understanding policies can be developed to address the issue.

Let’s look at data from the Japan Meteorological Agency [JMA] for Spring, March/April/May, 2014. This period had the warmest Global Average air Temperature over land and sea since JMA records began in 1891. The filled circles are individual years; the gentle up and down curving line is the 5-year running mean, while the straight line is the long term linear trend.

According to NASA, April 2014 was the second warmest on record globally [April 2010 is first]. It was an average month for the U.S., but for Europe and Asia it was an extremely warm month. It also was the 350 th month in a row with above average global temperatures. Average is the period from 1951 – 1980.

Globally, May was the warmest on record, over land and ocean surfaces, according to the National Climate Data Center. It was 1.33 degrees Fahrenheit above the 20 th century average. Four of the five warmest Mays on record came in the last five years.

How about for June 2014? Again we have another global surface [land and sea] average air temperature record as reported by NOAA and JMA [see “Month Global Average Temperature in June”]. According to NOAA it was the hottest June since record keeping began in 1880. The NOAA and JMS data are in agreement. Data from around the world are all saying the same thing. There is no uncertainty; there is no disagreement in the conclusions, even when different data bases may vary by 0.01 degrees Fahrenheit or so. 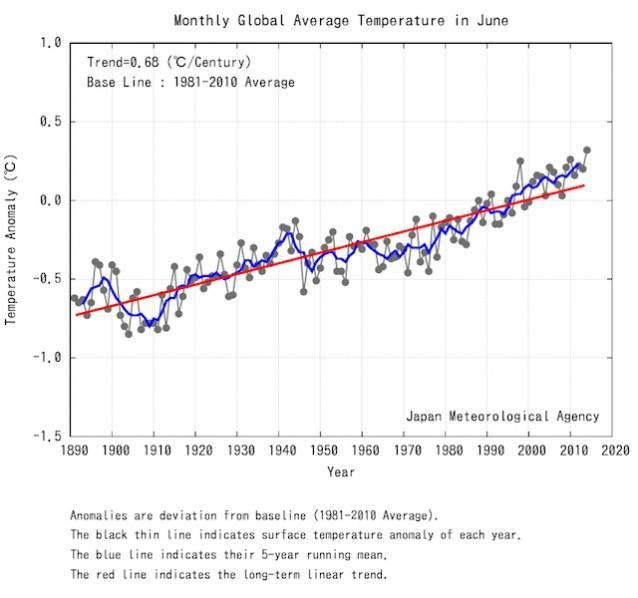 Looking out our window does not really tell us what is happening to our climate globally.

This shift in climate is happening now and will have far reaching impacts locally and globally. Let’s look at the drought in California. As of July 8, 2014, 81.89% of the state is in either “Extreme Drought” or “Exceptional Drought.” The balance of the state is considered in “Severe Drought” [three shades on USDA map].

The USDA has designated 27 of the 58 counties as disaster areas due to damages and losses caused by the multi-year drought. It is the driest 3-year period in CA since 1895 with increased unemployment, fallow farms and rising prices of various food items.

The nearby Colorado River basin has not been spared either. The basin supplies water to about 40 million people and four million acres of farmland across seven states. Lake Mead, behind Boulder Dam, the largest reservoir in the country, has dropped 130 feet since 2000 to its lowest point since 1937 [photo]. One of the two water intakes for Las Vegas is almost unusable. 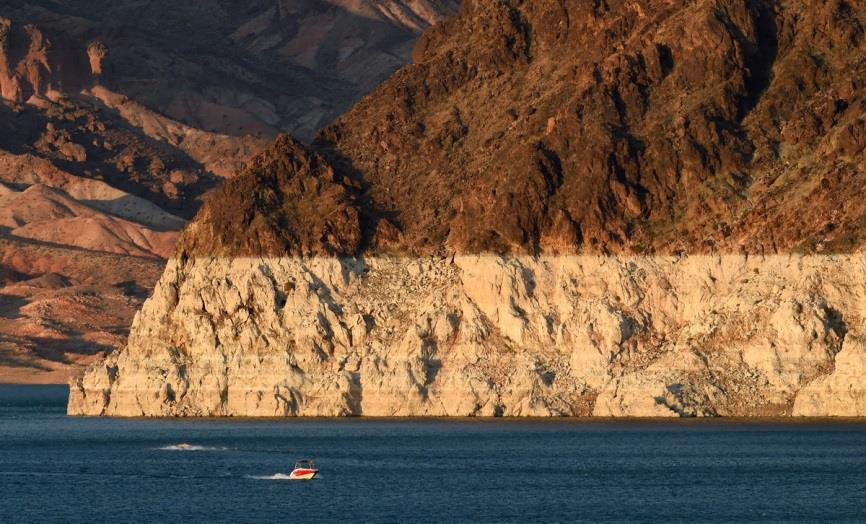