This is the name of a popular song published in 1953, with the best known recording of “Little Things Mean a Lot” sung by Kitty Kallen in 1954. It even reached No.1 on the Billboard chart. Lots of poets and other song writers have used these words too. Little things can mean a lot.

Scientists also appreciate this and are aware that it can mean something different and something a lot smaller: molecules! Molecules, made up of atoms, are the basic building blocks of the universe and everything around us.

Our DNA, our genetic code, is a very large molecule and we all know how important that is. But smaller molecules such as the greenhouse gas carbon dioxide [CO2] are also important. And, we have enormous numbers of them floating around us in the air all of the time and those numbers are steadily increasing.

Actually, the levels of CO2 in the atmosphere have reached a new high of over 404 parts per million [ppm] in February 2016. This is a new record and these levels have not been seen for thousands of years and perhaps a lot longer.

It was a bit unsettling to earth and atmospheric scientists, too, since this February year-over-year increase of almost 4 ppm was the largest ever measured directly in the historical record. [See“Atmospheric CO2” curve, CO2.earth.] 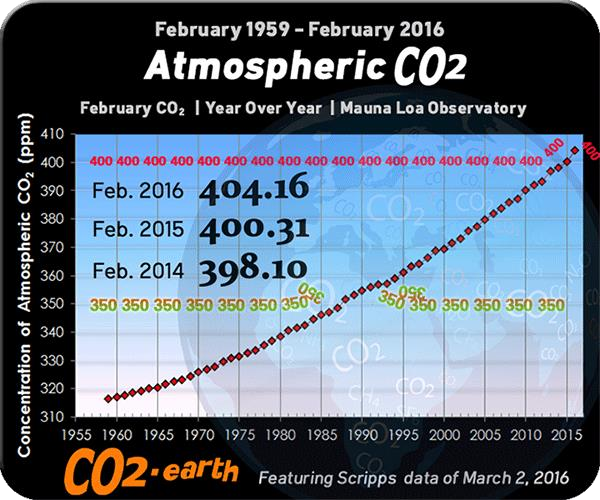 One definition of ppm is that you go 16 miles in one direction and come back 1 inch; that is 1 ppm.  Thus, following this analogy with CO2, we would go 16 miles and return 404 inches.

Parts per million sounds pretty small and indeed it is but consider this: hormones in human medications are frequently in this concentration range, and many medicines and vitamins are active and required for human health at this and lower concentrations.

And so it is with CO2; this gas has unique properties which, besides trapping and absorbing heat, remains in the atmosphere for hundreds of years or more. The term “half-life” is frequently used: this is the amount of time it takes for half of something to go away or be converted into something else.  The half-life for CO2 is on the order of at least 100 years. Thus if we put 100 pounds of this gas into the atmosphere today, about 50 pounds will remain in the air 100 years from now. And during this entire time this gas will continue to exhibit its inherent properties of absorbing heat and warming our atmosphere.

Little things do mean a lot. 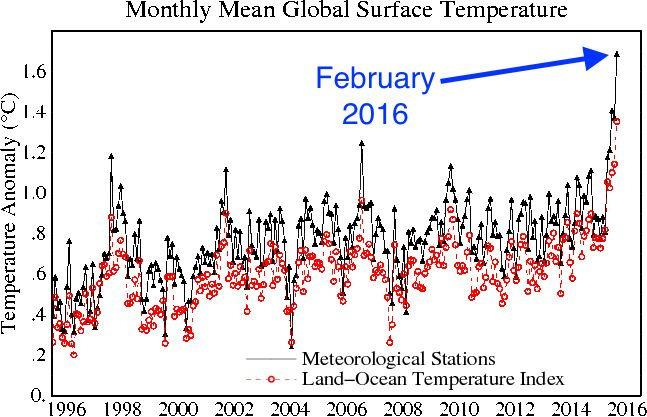 The impact of these increasing levels of this greenhouse gas is being felt in many ways and one is the global surface temperature [See graph titled “Monthly Mean Global Surface Temperature” from NASA/GISS.]

This past February 2016 broke all records as the point marked “February 2016” demonstrates. And it did not just break the record, it smashed it! While January 2016 also broke records for that month, February was 2.4 degrees Fahrenheit above the 1951 - 1980 average. This is a global record, not a country or a state, but global.

Now, let us take a look at the temperatures closer to home this winter. {See map of U.S. titled “Mean Temperature Departures from Average: December 2015 – February 2016.]

What we can immediately see is that most of the contiguous states are 2 to 10 degrees Fahrenheit above normal while only a few areas are at normal temperature levels [primarily the southern RockyMountains and some southwest desert areas.] The northern mid-west and New England areas are most pronounced with temperatures 8 to 10 degrees above normal. 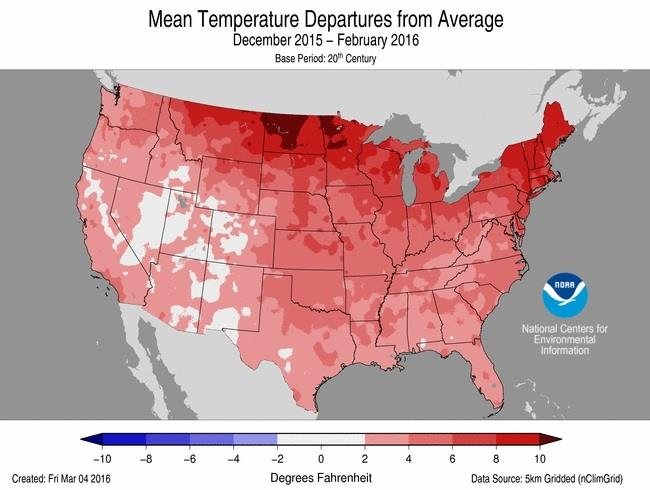 The Iditarod Trail Sled Dog race has been in the news lately too. A train full of snow was needed in Anchorage Alaska so that the traditional start of this race could take place. After the first 3 miles the race continued about 50 miles further north because of conditions.