The Oxford English Dictionary is published by Oxford Languages and they normally do an annual Word of the Year usage review. It is basically a tribute to the creativity and dynamics of the English language. A team reviews billions of words from news sources all over the English-speaking world and then they select one or a few words they find most interesting and reflective of our times. In 2017 the word

The year 2020 however, proved to be a real challenge in terms of both scale and scope of change. The use of the word “pandemic” increased by 57,000%. This then brought into use words “like ‘Blursday’ [...the way the week blends together]”, “covidiots” [no explanation needed], and so on, per The New York Times, November 11, 2020. Another word of interest is “anthropause,” or the reduction of human mobility and its impact on the world, along with many more.

So let’s look at the impact of this new word, anthropause. The bar chart titled “Carbon Cuts” [Nature magazine] illustrates the changes in carbon dioxide [CO2] emissions in 2020 compared to 2019, pre-Covid. The United States had the largest % reduction in emissions, 12.9%, compared with the world and the other major industrialized nations. Lack of leadership, science denial, politics, outbreaks, lockdowns, infection rates and more are reflected in these numbers.

It is interesting to note that the believed source of this virus was China and they had the least change in their economic activity as measured by CO2 emissions.

This CO2 [the primary greenhouse gas, GHG] emission reduction was good for the climate but not so good for many countries and their peoples as millions of jobs were lost, families are under stress, and hunger for many millions was a new threat. 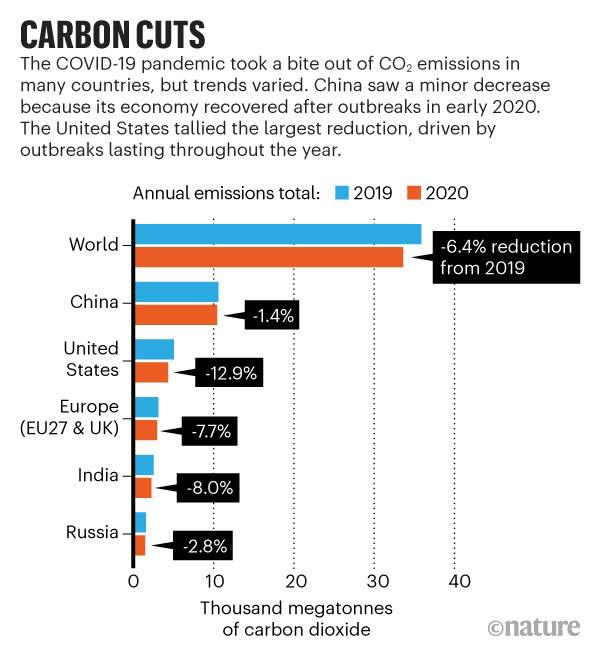 See also the bar chart labeled, “New Power Capacity in USA ... “which lists new power plants added in the 11 month period from January 2020 to November 2020 during the height of the pandemic. What is almost startling here is that renewable “Wind” and “Solar” added far more megawatts of new electrical power generation than “Gas,” as well as all of the other sources of power. Even these stressful times did not stop, or seemingly slow, the installation of renewable energy. The amounts of water, coal, Biomass, 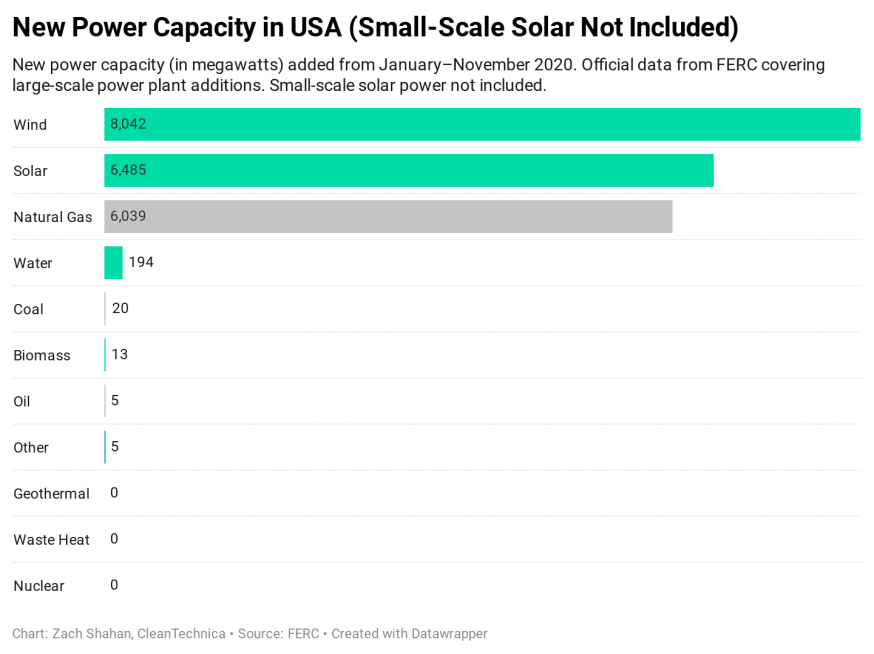 Let’s look at the plans for renewable energy for 2021. These are known projects and forecasts that have been announced at this time and the numbers may increase, or not, as the year moves along. Now, let’s look at another bar chart labeled, “Renewables Dominate New 2021 Power Plants.” What is remarkable is not only the generation capacity planned but the sheer number of projects. Solar with 358 projects, and Onshore wind with 76, dominates the new power generation scene.

Talk about a remarkable transition underway! 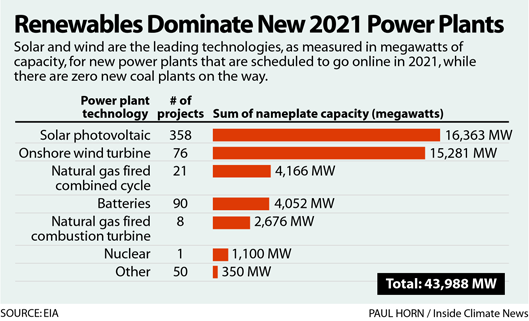 It was interesting to note that ExxonMobil [XOM], whose stock has fallen faster and further than other oil and gas majors, just recently declared their first annual financial loss ever. They had to borrow money and sell assets to continue to payout $15.2 billion dollars to its shareholders.

Other oil majors are beginning to diversify into renewables and other businesses but XOM is still following its original business model. In 2020 it wrote off $20 billion in stranded assets, fired 14,000 employees, and was dropped from the S&P 500 stock index while still claiming their fossil industry’s business fundamentals were strong.

Another company having difficulty defining its future has been General Motors. Mary Barra, the Chairman and CEO of GM [see photo], announced in 2016 major corporate plans to produce electric vehicles over the next several years. However, when the previous administration in D.C. was working to gut the energy efficiency and mileage requirements of new cars, Mary Barra sat next to the then president. GM also then joined the lawsuit by the government against California who wanted to have increased mileage and reduced emissions for cars sold there. 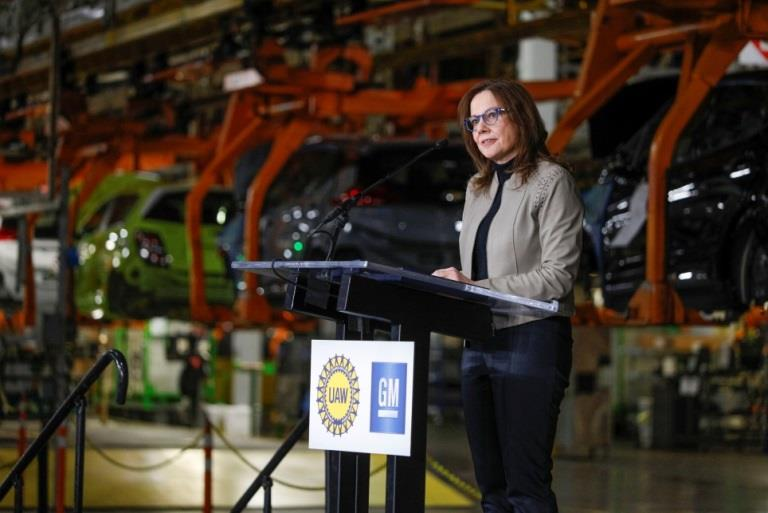 GM may still be in the environmental doghouse, but a few weeks after the election it made a U-turn and stated that it plans on selling only electric vehicles [EV’s] by the year 2035. It is a bold plan and the company has committed to sell only zero-emission cars and trucks by 2035, and plans to invest $27 billion and introduce 30 EV’s by 2025. The recent Superbowl GM ad notwithstanding, neither the Cadillac nor the Hummer shown are in production yet; the Chevy Bolt is still their only EV.
The saying “it is hard to pluck a flower without troubling a star” is certainly true in the energy generation field. Bird fatalities associated with wind farms is no exception and this has been a concern for many. While the actual numbers of bird [and bat] deaths from wind turbines are not known exactly, and the numbers are thought to be small, they do occur.

Enter IdentiFlight, a company that merges high-precision optical technology, machine-learning and artificial intelligence [AI] to detect eagles and other protected bird species. When combined, this technology will detect a bird species up to 3,000 feet away, identify it, determine its velocity andtrajectory and halt turbines that might cause it harm. The device [see photo, IdentiFlight] sits on a tower and will cover multiple turbines in a wind farm. The results of an independent study conducted in Wyoming, has been recently published in the Journal of Applied Ecology. The report’s conclusion was that there was an 82% reduction in eagles, kites, and Condors fatalities using this technology.

The takeaway is that wildlife and wind generation can coexist.