This is going to be a dirty story: about carbon soot that is. In the combustion of biomass (e.g. wood, crop residues, dried dung), and fossil fuels (coal, oil and natural gas), the primary end product is the gas carbon dioxide. As has been noted previously, this gas is colorless and invisible to the eye. Also formed during the combustion process, under certain conditions and to a lesser extent, are small black particles which one can see (such as from diesel engines or lit candles with long wicks), and which have recently been recognized by scientists as a contributor to global warming.

Black carbon or soot is a part of a larger type of emissions, both natural and manmade, called aerosols. These aerosols are very small particles that are suspended in our atmosphere. They can originate from natural sources such as salt spray formed during ocean wave processes, dust formed from the grinding and erosion of land surfaces, forest fires, and volcanic eruptions for example.

The role that these aerosols play in our atmosphere is complex. The emissions diagram below gives a simplified version of aerosol generation showing how they can enhance cloud formation and precipitation. This can have either a cooling or warming effect depending on a variety of other factors.

For example, a large volcanic eruption can inject millions of tons of small light colored particles high into the atmosphere where they reflect sunlight back into space causing a cooling effect. This effect can be measured by a temperature drop on our planet’s surface. When Mt. Pinatubo in the Philippines erupted in 1991, global average temperatures actually dropped a degree or two until the particles settled out and warming again resumed. 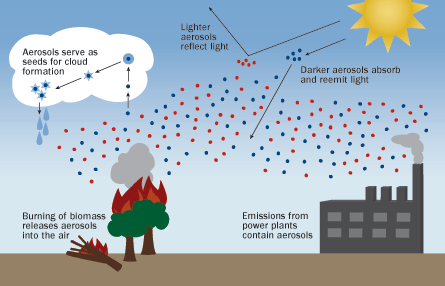 Darker particles, however, directly absorb energy as any dark surface will do and therefore have a warming effect. The rest of our discussion will address just these darker carbon or soot particles.

The following illustration of ice (courtesy NASA) perhaps illustrates this best. The left image shows how sunlight is reflected from the white ice surfaces, and indeed, up to 90% of the incoming solar radiation is reflected back into space. It also shows that the darker water surface absorbs solar energy. The right hand image shows the effect of black carbon particles on ice. In this case the darker, dirty if you will, ice surface absorbs a significant portion of the sun’s energy which will result in increased ice melt. This is also an example of a positive feedback effect. That is, the melting ice forms darker water, which absorbs more energy, which in turn melts more ice. 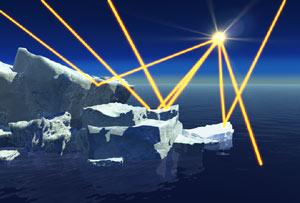 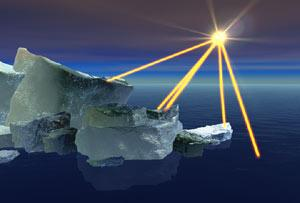 Most of this black carbon is of anthropogenic origin, that is, from the incomplete combustion of fossil fuel and biomass burning. Atmospheric and climate scientists are trying to improve their understanding of this effect since it is an important component of climate science, the development of climate models, and the warming we are experiencing today. According to the 2007 IPCC Fourth Assessment Report, p 163, emission estimates are approximately 8.1 megatons [8,100,000 tons] of carbon per year.

Not only is the quantity of carbon particles important, but also their size and shape. Electron microscope images of these particles show complex shapes that change with age which in turn affects their size and their interaction with wavelengths of solar energy. Characteristically, the larger ones settle out faster and the smaller ones remain suspended for longer periods of time. The size range of interest here is from ~0.1 to 1.0 microns where one micron is equal to one-millionth of a meter. A human hair is ~ 100 microns in diameter. A search on the web provides many images of these particles for illustration purposes.

The story continues with more glimpses of ongoing research.

---In the Himalayas, Asian brown clouds (mixture of soot and other particles) have been photographed from space and are thought to coat the glaciers and hasten their melting.

---In California, dust and soot clouds from its own emitting sources, and from Asia, are settling out on the Sierra Nevada snowpack. This is likely contributing to the speed-up of the snowmelt with important impacts on reservoir capacity and agriculture.

---The Norwegian Polar Institute issued a report in May 2010 that stated: “Norway should limit soot from emerging Arctic industries such as oil and shipping that risk accelerating a thaw of ice around the North Pole caused by global warming.”

---Research from NASA scientists, using a computer simulation, suggests that black soot may be responsible for 25% of the observed global warming over the past century. It is believed to be the second largest contributor to global warming after carbon dioxide.

--- At Scripts Institute of Oceanography, V. Ramanathan et al. published an article in NATURE, 2 August 2007, page 575, titled “Warming trends in Asia amplified by brown cloud solar absorption.” The authors go on to state, “...that the combined warming trend (caused by these particles) ... may be sufficient to account for the observed retreat of the Himalayan glaciers.”

---At Stanford University, Mark Jacobson reported that the quickest way to slow the melting of Arctic sea ice is to reduce soot emissions from the burning of fossil fuel, wood and dung. He further states that this may be the only way to slow Arctic warming within the next two decades.

---The World Health Organization reports that soot emissions kill more than 1.5 million people prematurely worldwide each year. In addition, millions more, mostly in the developing world, are prone to develop respiratory illnesses and asthma. This work was published in Journal of Geophysical Research – Atmospheres, in July 2010.

--Public health scientists have noted for years that open fires and primitive stoves pose enormous health risks, particularly for women and children. Some two billion people around the world do most or all of their cooking and heating using biomass. Women typically spend long hours cooking meals beside smoky fires and stoves, with infants and small children nearby. With expanding populations in Africa, India and China, and increased use of biomass (wood, crop residues and dung), the issue is intensifying.

--- Secretary of State Clinton announced on September 22, 2010 that the United States, together with the United Nations, and other partners are launching a program to provide many millions of inexpensive solar cookers and clean burning stoves in the coming decade to try and address this multi edged black soot problem. The issue is so new that the draft international climate treaty negotiated in Copenhagen last year still does not contain soot-specific provisions.

Our understanding improves and the science continues....