Menu
You are here: Articles2016 ICSUSA ARTICLESJuly 2016 - Climate Change: A story With Many Characters

Climate Change: A story With Many Characters

It is hard to imagine a story with only one character in it.

To reveal the full complexity of the author’s intent, a historical novel of pre-war Europe by Alan Furst may have 40 - 50 or more individuals in it. It is rich, with characters facing many forces and or obstacles larger than themselves as they try to survive and/or ‘make a difference.’

Or how about the book and later movie titled, “The Girl with the Dragon Tattoo” by Stieg Larsen? The number of individuals exceeds 55 making for a rich and complex tapestry of events far different from what we know or expect.

And so it is with the “Climate Change” story, also called by some, “Global Warming”. We have a “story” that is markedly more complex than any novel or movie, and arguably, more important to the human species and civilization as we know it.

What complicates the narrative here is the fact that the story is not fully written and that all of the “characters” and their roles have not been identified yet. In addition, the conclusion is not known since the final chapter will depend on the steps people and governments take to reduce greenhouse gas [GHG] emissions over the next two decades.

Let’s look at some of these characters that are playing a critical role in the story of Climate Change and assess what is happening now, today.

One “character” is noted in the first illustration titled, “Climbing CO2,” from Climate Central. We see a series of irregular lines of CO2 concentrations during 12 month periods from 2011 to 2016. The bottom line, 2011, the peak is at 395.1 parts per million [ppm]. For each succeeding year we can see that the maximum concentration of this GHG is higher than the previous year. 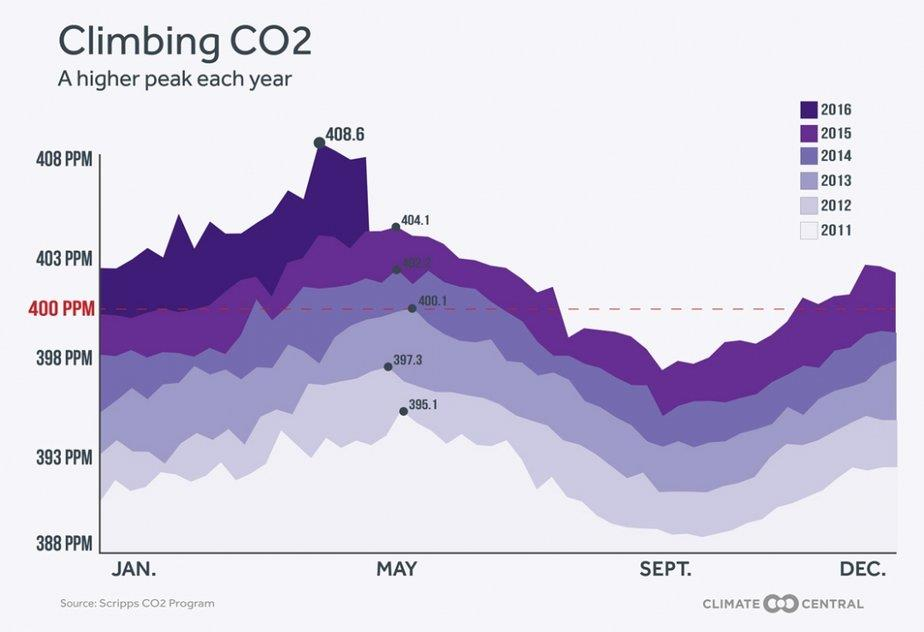 This continuous increase in concentration of CO2 in the atmosphere has been relentless.

Not good: but we all share responsibility in these increased emissions with our daily personal decisions and behaviour.

Another measurable climate “character” concerns the “Average Monthly Arctic Sea Ice Extent, May 1979 – 2016.” This chart is provided by the National Snow and Ice Data Center in Boulder, CO. The latest data from early June 2016 reveals that the ice coverage in the Arctic is on track to reach a new low. 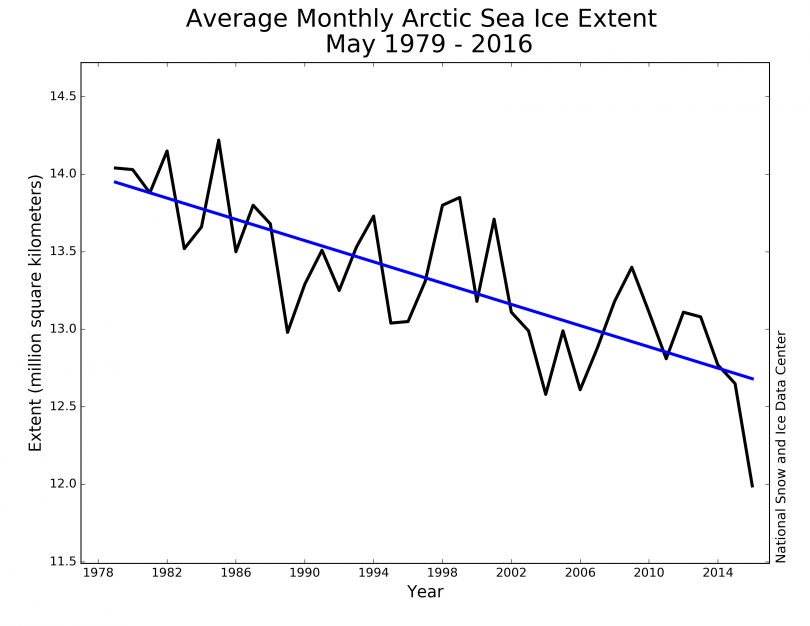 This continued loss of sea ice extent brings about much warmer air temperatures there, changes in jet stream location, precipitation pattern changes and so on. This “character” in the story is not fully understood but is having an outsized impact in the narrative. One recent example was the over 100 inches of snow in Boston in 2015 while Anchorage Alaska had very little.

The warmth in the Arctic is also bringing about losses of permafrost, another “character” in the climate story. 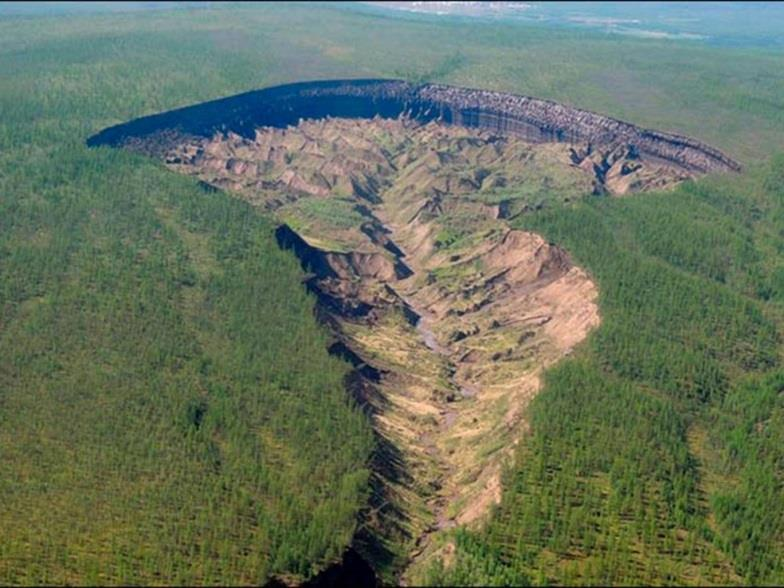 The photo here from www.independent.co.uk is of a large crater, named Batagaika, in Siberia. The local people call it “the Gateway to the Underworld’ and fear to go near it. First seen about 25 years ago this massive crater is now about 3,300 feet long and 300 feet deep. It is getting wider every year [~65 feet per year] and as the melting permafrost continues, large amounts of methane gas are released into the atmosphere.

Not good. Methane is a powerful GHG about 25 times stronger than CO2. Our story will not have a satisfactory ending unless this melting stops soon.

Another “character” has entered the climate story in a big way; fire. One of results of global warming is changing rainfall and snow patterns. The Arctic has been hit hard by drought and resulting forest fires. In May 2016, Canada had one of its largest and worst fires ever.

See photo of fire and smoke approaching homes [www.vice.com/en_ca]. Consider this: about 88,000 people evacuated Fort McMurray in Alberta, Canada, which is about the total number of people that live in Clinton County, NY.

The evacuation route was a two-lane road leading south out of town and the cars and trucks stretched for miles. The process was orderly and if a car ran out of gas it was moved out of the way. 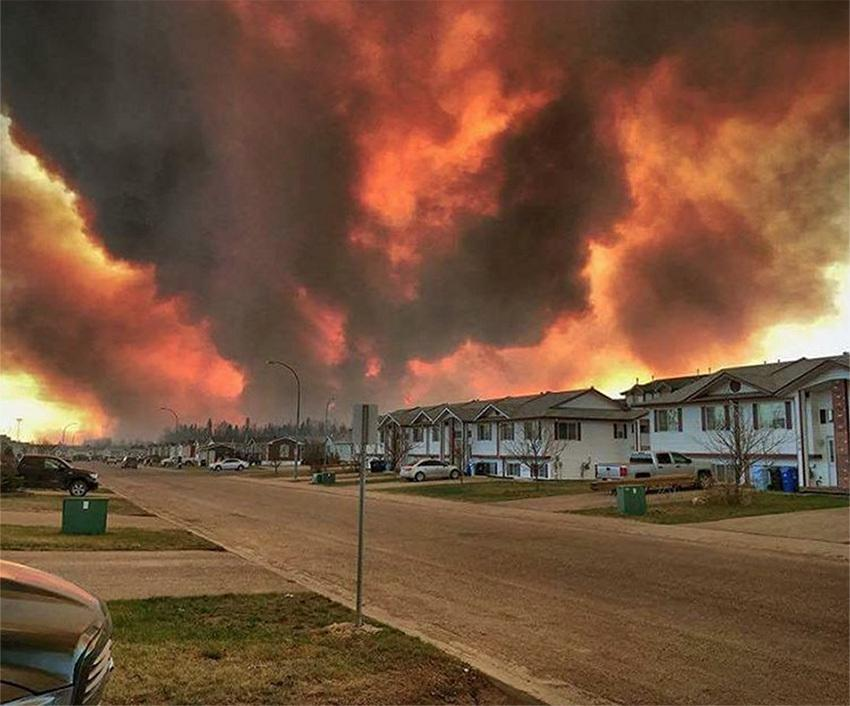 The story with more “characters” continues.