Menu
You are here: Articles2022 ICSUSA ARTICLESOctober 2022 - Science and Research: Understanding the Workings of Our Planet

Science and Research: Understanding the Workings of Our Planet

Curiosity, research, new tools, and dollars are providing ever more information and opportunities to help understand the workings of our planet with all its complexities [natural, human caused, technological].

Here is a mosaic of some of those bits and pieces.

Take for example Alvin, a deep-sea research vessel developed and recently modified by Woods Hole Oceanographic Institution [WHOI], in MA. The latest version can hold three people, a pilot and two observers, and in 2022 was certified to go as deep as 20,000 feet. This covers about 99% of the ocean floor. See photo of the support ship Atlantis retrieving Alvin at its stern after a dive in November 2021. 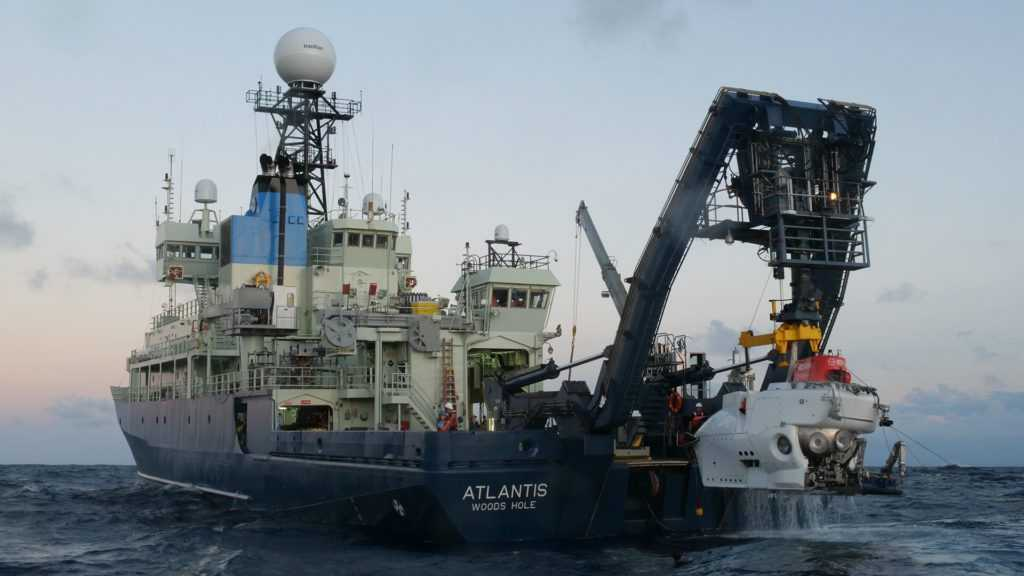 The ocean as we know, plays a huge role in our planets’ climate system. It absorbs about 50% of our carbon dioxide [CO2] emissions, and about 90+% of the excess amount of infrared heat brought about by the greenhouse gases [GHG] we emit.

Much of that CO2 is taken up by phytoplankton which are microscopic marine algae or microscopic plants. And, these plants contain chlorophyll, and in sunlight take up the dissolved gas, lives and grows. Of course, as part of the food chain we also have zooplankton, small animals that just love to browse on the phytoplankton. And then, in turn, they become food for still larger organisms. You get the picture.

As these creatures die the carbon in their bodies is released and much of it falls, like rain, down through the water column to the ocean floor. Here it can be stored for long periods of time effectively removing it from the climate system. The overall process, amounts, storage times and more are not known with clarity and this is where the Alvin comes in.

Experiments and dives are planned to better understand this process, its significance, and how it impacts and influences Earths’ climate complexities.And then we have things happen which are hard to explain and understand; war and human actions that are disasters for Earth’s climate. And this is not easily predictable. 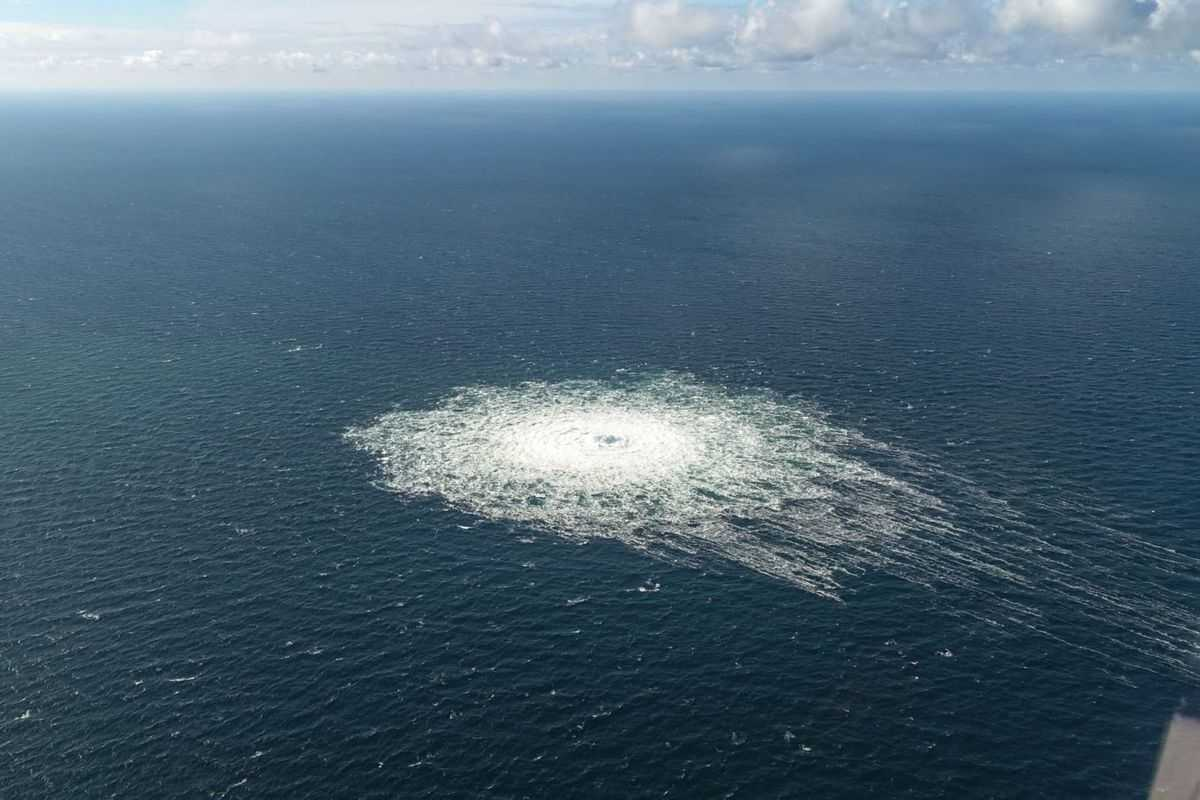 The aerial photo here [supplied by the Danish Defense Command/dpa] of a half mile wide eruption of bubbles from the ocean surface is bad, very bad. The gas being released is from the Nord Stream pipeline or lines and it is methane. Methane is a very powerful GHG and up to 20 or more times more powerful than CO2. It is extremely combustible, and all shipping was forced to stay clear.

With geopolitics in the daily news [Russia, Ukraine and the West] sabotage is the likely culprit and both the Swedish and Danish defense ministries detected explosions shortly before the erupting bubbles appeared. The Baltic Sea is relatively shallow and is about 300 feet deep in this area. It is estimated that the pipeline(s) was full but not transporting any gas at the time, but an estimated 330,000 tons of methane were released.

The pipeline is about 760 miles long and mostly underwater and stretches from Russia to Germany.

These additional human actions are hard if not impossible to predict but illustrate the need to move away from fossil fuels and their impact on Earth’s climate.

Then of course we have an unusual “natural” event; an underwater volcanic explosion in January 2022 in the western Pacific Ocean. In this case it was a surprise but the effect on Earth’s climate is significant.

See photo from the NOAA GOES-West satellite of the Tonga Volcano erupting [NOAA/ZUMA Press Wire Service/REX/Shutterstock]. In the photo the appearance is almost like a nuclear bomb explosion. Molten lava in excess of 2,000 degrees Fahrenheit exploded about 500 feet beneath the surface of the ocean and vaporized about 160 million tons of water. It also sent shock waves around the world and a tsunami that hit parts of Australia, New Zealand, Japan and other island nations in the vicinity.

The concern from a climate point of view is that this enormous amount of water vapor, which is a GHG, formed a cloud, along with ash and other volcanic gases, that reached an altitude of some 35 miles! 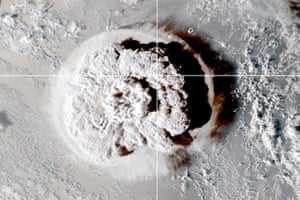 This enormous amount of water vapor will alter the atmospheric chemistry that destroys ozone which protects life on Earth from harmful ultraviolet radiation. It will take a few years for the normal cycle to reestablish itself. It is thought that in the meantime, water vapor with its GHG warming properties, will contribute to warming of the planet.

And then there is the impact of technology on our climate.

There are several take away points in the information here. First, the number of electric vehicles [EV] sold in 2011, globally, was miniscule; about 55,000. As we follow the bottom axis along from left to right we can see the enormous change in EV sales over the past 10 years.

When we look at the EV sales numbers [see vertical axis on the right], the global total in 2021 is about 6.8 million units. But more than that note where most of the sales are: China. The U.S has a small fraction of the sales compared with China. If the EV boom is happening with all of the implications in terms of technology, computerization, reduction in use of fossil fuels and resulting CO2 emissions, and a more healthy environment, then we had better get moving. 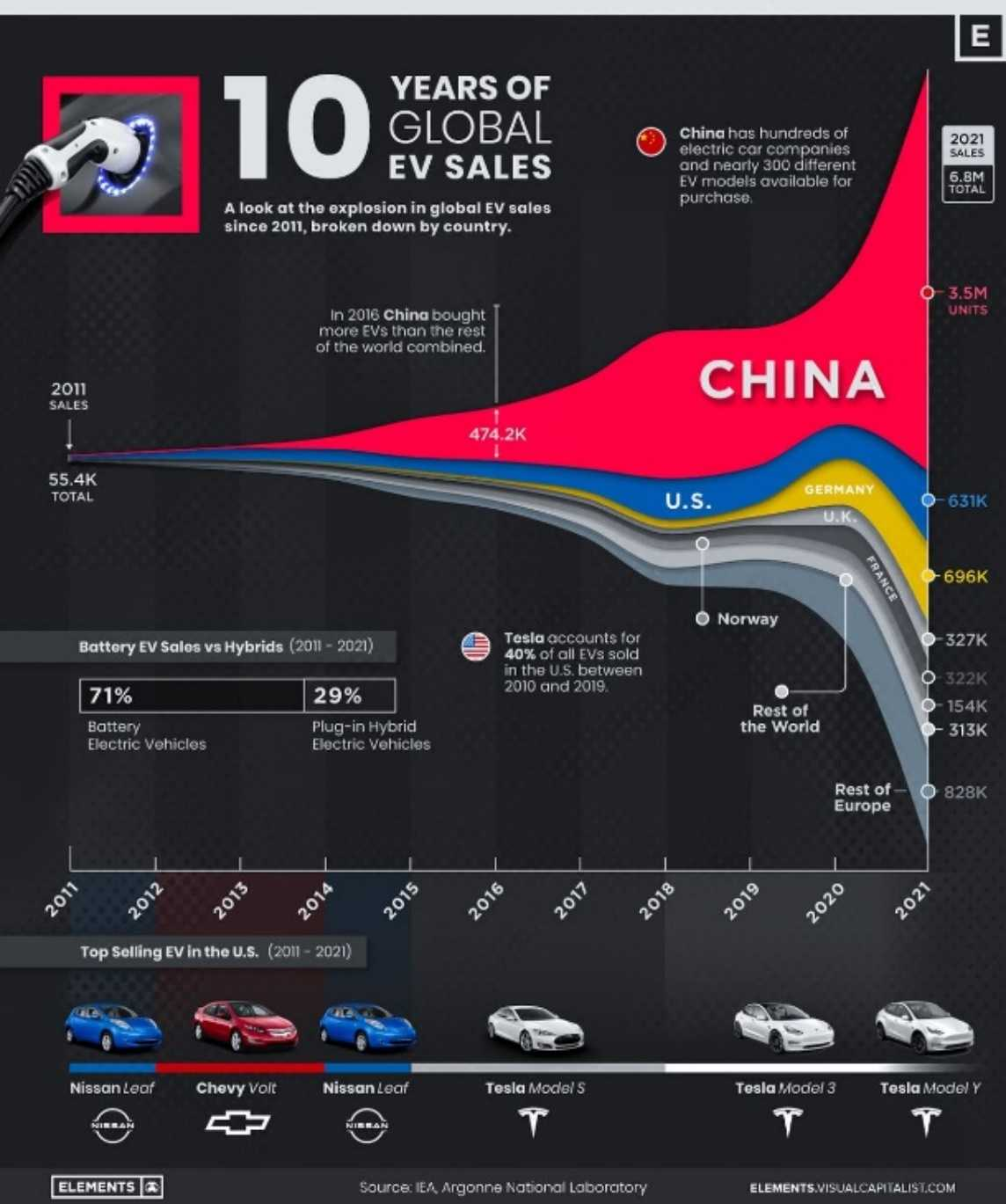