Menu
You are here: Articles2010 ICSUSA ARTICLESMarch 2010 - The sun: driver of all weather

"Ra" is the name ancient Egyptians called their sun god.

It represented light, warmth and growth, and while its meaning changed somewhat over the millennia it was always central to their culture. Today the sun is still central for scientists trying to understand how it creates and changes Earth's weather and climate over time. While it may appear to us to be a constant, in fact, some scientists consider our sun to be a variable star.

The sun is a maelstrom of activity. Solar flares explode from its surface on an irregular basis with the power of a billion nuclear bombs. Clouds of magnetized gases spew from the sun's surface almost daily and are large enough to swallow planets. Million-miles-per-hour gusts of solar wind emanate from its surface into space. And ours is just an average star. But I am getting ahead of myself. First let's take a quick look at its origin.

Astronomers and physicists agree that a huge molecular cloud of gas, a nebula, collapsed and began to spin, a process caused perhaps by a shock wave from a nearby exploding star. Most of this collapsing mass collected in the center, forming the sun, and the rest formed a flattened disc out of which formed the planets, moons and other small bodies. All of this happened between 4.55 billion and 4.56 billion years ago. And yes, modern instrumentation and knowledge of different element forms allow such precision in that time measurement.

The sun, with 99.86 percent of the mass of the solar system, consists mostly of hydrogen and helium. The enormous energy emitted from the sun comes from the fusion of hydrogen nuclei into helium. This is caused by the extreme pressures and high temperatures within that body. It is literally undergoing continuous thermonuclear explosions not unlike those we might remember seeing pictures of on islands in the Pacific Ocean decades ago. The energy output is prodigious but the sun's enormous gravity holds it all together. It has "burned" through about half of its hydrogen fuel load already.

On a clear, warm summer day we can feel that heat, and then take the necessary steps to protect our skin from this solar radiation — and yet the sun is a full 93 million miles away.

Let's visualize a humongous beach ball for a moment, with a tiny dot in its center representing the sun. Then place a teeny tiny dot anywhere on the surface of that ball that represents the Earth. Since the sun emits light and energy in all directions, one can visualize how little actually reaches Earth. But oh, just how important that little bit is.

In one attempt to understand the role of the sun on our weather and climate, some scientists have been studying magnetic storms on the sun's surface called sunspots. Early astronomers in the 1600s began the collection of data on sunspot numbers that aid in the understanding of these cycles. In the accompanying chart, observe the number of sunspots plotted over the past 400 years.

During the Maunder Minimum, for a period of about 70 years, the plotted data shows almost no sunspots were observed, and this period happened to coincide in part with the middle and coldest part of the Little Ice Age. Whether there is a connection here or not is still a subject of debate and the cause of this Minimum still baffles scientists. The chart also shows the rhythmic cycle of sunspots from about the 1700s to today. On average, these cycles last about 11 years, but can vary from about nine to 14 years, and within a cycle the number of sunspots can vary significantly.

The last sunspot cycle began in 1996 and another was expected to begin in 2007. It still has not started, 13-plus years later. This is the quietest sun we have seen in almost a century. If there had been any connection with reduced sunspot numbers and reduced temperatures, that cycle no longer holds. The fact is that the 1990s was the second-warmest decade in recorded history and now we just experienced the warmest decade (ending in 2009) in recorded history. What is going on? The short answer is no one seems to know. Yet.

A second parameter scientists can now look at, thanks to satellite measurements over the past 30 years, is the actual energy received at the top of Earth's atmosphere, as is shown in the accompanying chart from the National Solar Observatory. Across the last three sunspot cycles, one does see some very small variation. The left-hand axis shows a small 1.5 watt variation (from 1365 to about 1366.5 watts per square meter) from the minimum of a sunspot cycle to the peak, but this is only about 0.1 percent of the total energy received. Again, any potential "natural" tendency to experience more cool weather when we have fewer sunspots appears to have been circumvented by something else, something new. 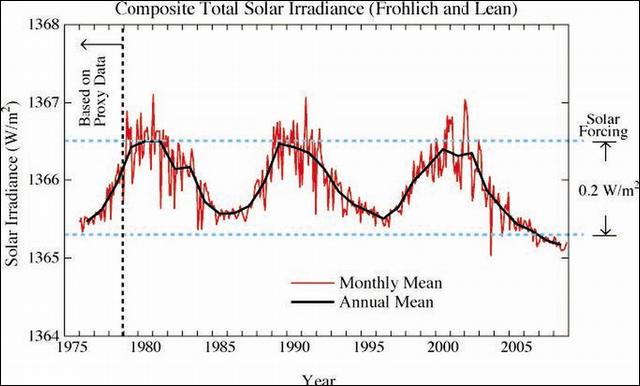 Most scientists agree that that "something else" is the prodigious quantity of greenhouse gases, primarily carbon dioxide, we are pouring into the atmosphere and that this has overridden any potential natural cycle. This argument is a strong one. We know that carbon-dioxide levels are higher today than have ever been experienced in at least the last 800,000 years. It is also known that this gas absorbs infrared energy that would normally be emitted to space as was shown by Arrhenius in 1896.

As we consider this, remember that every year we consume and combust 31 billion barrels of oil. And that's every year. We also burn 6.7 billion tons of coal annually (2006). And these numbers are growing and will continue to grow under current practices and policies. Then we have to add in the natural gas and biomass we burn. And all of this combustion, and all of the resulting carbon dioxide and other gases are emitted to the atmosphere where they continue to impact our environment in a myriad of ways that are still not fully understood.

But let's return to the sun. What are NASA and scientists doing to better understand our sun and its basic processes? The Feb. 11, 2010, launch of the Solar Dynamics Observatory (SDO) is designed to probe solar variability faster, deeper and in greater detail than any previous observatory. According to one researcher, the SDO will revolutionize our view of the sun and its impact on our weather and climate. We can monitor spaceweather.com, an excellent Web site, and stay tuned to what comes out of this research.