The Earth's poles are poles apart, and the pun is intended.

While the North Pole is in an ocean surrounded by land, the South Pole is a continent surrounded by the Southern Ocean. Let us focus on Antarctica as it is a big player in Earth's climate systems.

We get occasional sound bites in the news or press about what appears to be happening there, but they are usually brief and leave one hoping for more, for a more clear placement and interpretation of that particular fact. Even Webster's New World dictionary is brief: "land area about the South Pole, completely covered by an ice shelf: c. 5,000,000 sq. mi.: it is almost entirely within the Antarctic Circle: sometimes called a continent." OK, this is a start, but let's dig a little deeper.

How does one describe a continent — especially one whose land mass is 98-percent covered by an ice cap? Get ready for some big numbers. Let's try and construct in our minds' eye what this place must be like. It is huge and at 5.4 million square miles is larger than Europe or Australia and 1½ times the size of the United States. Its highest point is more than 16,000 feet above sea level. The continent holds 90 percent of the world's ice and the ice, up to 10,000 feet thick in places, holds about 70 percent of the planet's fresh water. A satellite photo of Antarctica from Google Earth is stunning, with its pure whiteness surrounded by a blue ocean, and is readily available by a web search. 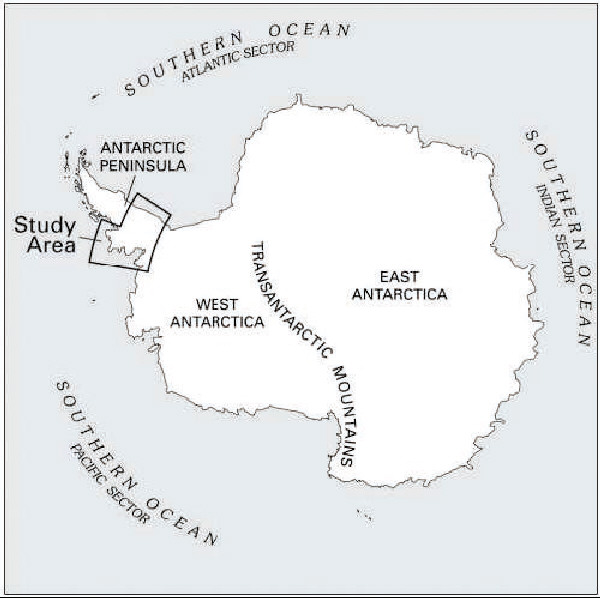 The map indicated here gives the general outlines of the continent. It shows the two major ice sheets, one in the east sitting largely on land, the East Antarctic Ice Sheet (EAIS), and one in the west (WAIS), resting partly on land and partly grounded on the ocean floor up to one mile below sea level. They are separated by the Transantarctic Mountains. In the upper left is the Antarctic Peninsula, stretching up towards Chile, which is one of the areas whose glaciers are under intensive study by the United States Geological Survey (USGS). This peninsula is the area most often visited by cruise ships bringing intrepid visitors to this ice-bound world.

So what is the issue? It is really quite simple: If climate change causes half of that ice to melt, ocean levels will rise by about 100 feet and Lake Champlain will be connected with the Atlantic Ocean. If it all melts, well, I think you get the picture.

What are the challenges that make it so difficult to find out what is happening there as Earth's climate warms? The reason seems to be that we have an almost "perfect storm" of three factors. We have winters and nights that last up to six months with temperatures as low as minus 129 degrees F, the lowest temperature ever recorded on Earth; a relatively small number of researchers and support staff (up to 4,000 in summer and 1,000 in winter) located in about 65 different "stations"; and third, it is a huge continent where all one can see most of the time is ice.

Oh, and the closest convenience store is about 1,500 miles away in case you need something.

These account, in part, for some findings in the past that seemed to come to different conclusions. But new "tools," together with the scientists' efforts on the ground, are beginning to put together a clearer picture of what is happening there.

These tools are satellites with powerful new capabilities. In order to "see" what is happening on these enormous ice sheets on a repeated, long-term basis, it was apparent that what was needed was the ability to measure the thickness of this ice to within close tolerances. Enter what is now known as NASA's GRACE satellite as well as ICESat, and the European Space Agency's (ESA) CryoSat-2 launched April 8, among a few others.

The GRACE system basically consists of two satellites, one following the first by some miles. As the first satellite passes over thicker ice, its orbit dips a bit because of the increased ice mass and resulting increased pull of gravity. The amount of this dip is detected by the second satellite. The reverse also occurs. When the orbit of the first satellite rises over ocean with its reduced gravity, this amount is also detected by the second satellite. With this data, an elevation profile map is produced showing differences in height measured to within about three-quarters of an inch. This same technology was developed during the Cold War to make ICBMs more accurate as they passed over continents and oceans.

The ICESat carries a laser altimeter to measure the height of the ice surface.

The recently launched ESA satellite, using a sophisticated radar instrument, will also be able to map the ice thickness here, in Greenland and the Arctic. In its polar orbit it will reach latitudes of 88 degrees and cover far more of all of these ice sheets than ever before. The ability to measure ice thickness to within ? of an inch for both sea ice and land ice will provide unprecedented information on what is happening to these ice sheets. This launching incidentally reflects the world we live in: The satellite was made in Europe, lofted into space on a Russian rocket, from Kazakhstan in central Asia, and monitored in orbit from Kenya!

The chart below shows some of the results obtained to date on ice-mass measurements in Antarctica. While there are changes during the year, the data is very clear: Antarctica is losing a lot of ice and the rate of ice loss is increasing (note the curved trend line). This ice loss is equivalent to 24 cubic miles of water per year and accounts in large part for the sea level rise. This is one of the clearest indications yet that global warming seems to be having an effect at the South Pole also. 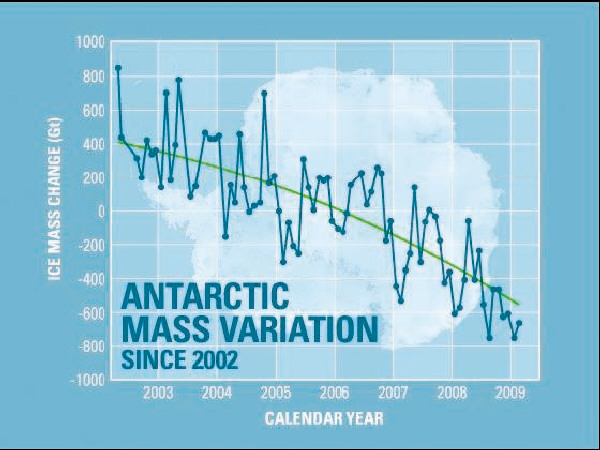 The scale of events occurring there are spectacular: nine years ago a large iceberg broke off from an Antarctic ice shelf (WAIS) and is currently circulating about the Southern Ocean and melting slowly. As of November 2009, it was almost a half-mile long and more than 1,000 feet thick. The web photos are really dramatic.

In February this year, the tongue of the Mertz Glacier (part of EAIS) broke off and a new iceberg formed. We may need a new word for it as it is big — very big. It is 50 miles long and 20 miles wide and will take decades to disappear as the currents move it about the ocean and it slowly breaks apart and melts.

This is only a part of the story, however, and it does get complicated by many other factors. These include the impacts of the "ozone hole," melting of the ice sheets from underneath by warmer ocean water, increased precipitation (as snow) due to more available moisture, reduced salinity of surface waters and resulting impact on the biotic community, and so on. With these newer "tools," and scientists' continuous work on the ground, our understanding of how Earth's climate is changing and its potential impacts will become clearer.

Hopefully this will allow policymakers and our leaders to make the decisions needed to address this issue.