Menu
You are here: Articles2020 ICSUSA ARTICLESSeptember 2020 - Supply and Demand: It Matters, and Some Oil Companies Are Getting the Message

Supply and Demand: It Matters, and Some Oil Companies Are Getting the Message

British Petroleum [BP] is a giant, global fossil fuel [oil and gas] company. Its 2019 sales were >$282 billion dollars, and with headquarters in London has over 70,000 employees worldwide. It supplies ~3.8 million barrels of oil per day. So it is big.

But as of February 2020 it has a new CEO, Bernard Looney, and he had this to say: “There’s a view that this is a bad industry, and I understand that,” and that his company’s main commodity is becoming increasingly “socially challenged.” He went on to say that even people working within BP started to have doubts about their line of work, and that they were in danger of losing staff, and more.

In August 2020 the company reported a $16.8 billion quarterly loss. Mr. Looney then presented a bold new climate strategy and ambitious business plan to make over the company into a diversified cleaner energy company within a decade. He went on to describe a transformation that, in part, included a 40% reduction in oil and gas production by 2030 and a ten-fold increase in renewable energy investments!

BP also took a $17.4 billion write down in value in recognition that its oil and gas fields are no longer worth as much as they once were. This is seismic!

This is what a disruption looks like; a major change in thinking, a big change in corporate direction and a recognition that renewables will continue to displace fossil fuels and that they are here to stay. BP has pledged to achieve “net zero” carbon emissions by 2050.

And this is not all.

Exxon Mobil [XOM], for the first time in 90 years, will drop out of the S&P 500 Index’s 10 biggest companies. According to Tom Sanzillo, director of Energy Economics and Financial Analysis ‘”the oil sector has gone from being the leader of the world economy to a laggard.” In the last decade the energy sector’s share of the S&P 500 has fallen about 12 percent to 3 percent today.

Kingsmill Bond, the author of a report from the financial think tank Carbon Tracker, said: “Now is the time to plan an orderly wind-down of fossil fuel assets and manage the impact on the global economy rather than try to sustain the unsustainable.” The report goes on to say the world is “witnessing the decline and fall of the fossil fuel system.”

Another blow came to XOM at the end of August 2020. The Dow Jones Industrial Average stock index is meant to include companies that are the might of American commerce. The keeper of that index replaced XOM with a software company [salesforce.com]!

As of now, however, XOM’s announced business model remains pretty much the same and they continue to fund climate change denial groups.

But today, all of XOM is worth less than Jeff Bezos.

Then we have the six European oil giants [BP-U.K., Total -France, Royal Dutch Shell-the Netherlands, Repsol-Spain, Eni-Italy and Equinor-Norway] along with Chevron [U.S.] who have wiped $87 billion fromthe value of their oil and gas assets this year. To a varying extent, they each announced goals for cutting emissions and ramping up investments in renewable energy.

However, it is still too early to celebrate. This transition will be uneven and is going to take time.

During the pandemic, carbon dioxide [CO2] emissions released into the atmosphere, have only decreased about 15% and are still on the order of 35 billion tons per year. Even with the lockdown caused by COVID-19, the global economy is still heavily dependent on fossil fuels as evidenced by this number.

The circular pie chart titled “Greenhouse Gas Sources,” recently updated by Climate Central, shows the five major sources of CO2 emissions in the U.S. It illustrates how deeply embedded the use of fossil fuels are in our whole economy. While some reductions in emissions have taken place in all five of these segments, especially in Transportation and Electricity, there is still much to do. 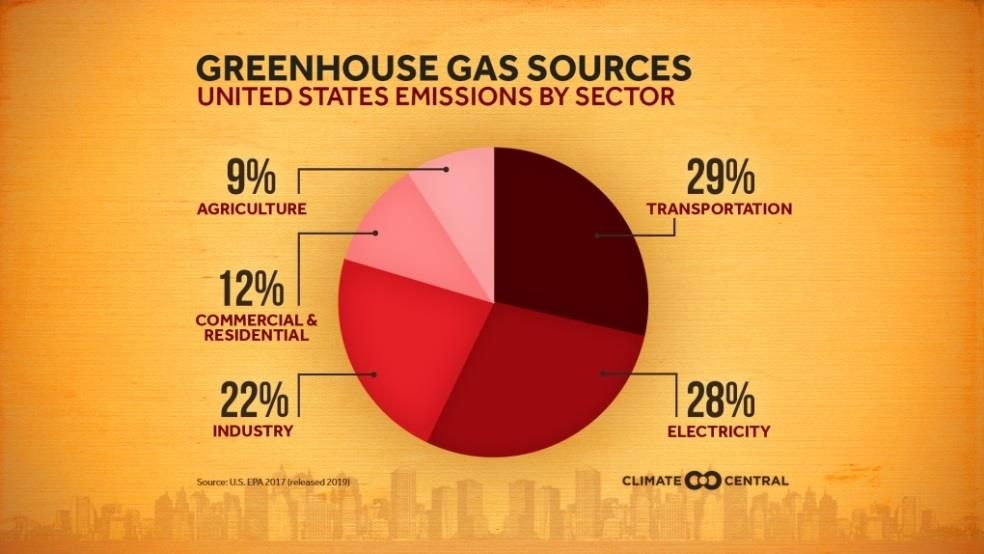 When we look at the graph titled, “Global Surface Temperature Relative to 1880-1920 Mean” we can see Earth still has a problem. This data is from NASA and Goddard Institute of Space Studies [GISS] at Columbia University. The 140 year data set, clearly illustrates the fact that Earth is still warming and that this process is not slowing down. Indeed, the rate of warming seems to be actually speeding up. Because of this extra energy in our climate system, climate change is here and now and will continue for some time, and we will have to deal with it. 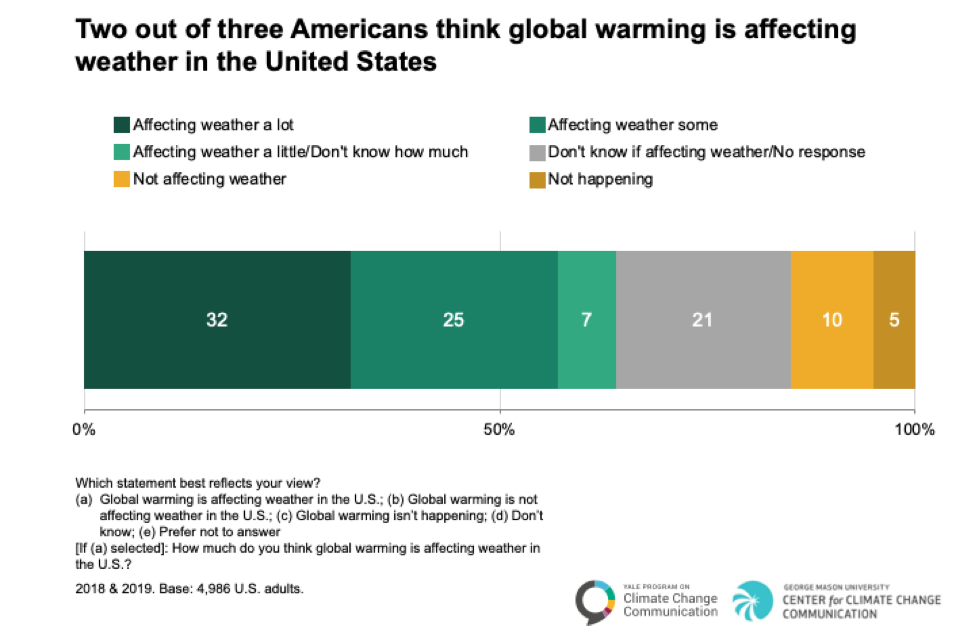 This is a promising shift in public awareness with implications that the “Green New Deal” sponsored in Congress may have a chance to become law and help start the U.S. down a path of strong renewables and reduced CO2 emissions. We’ll see.