Menu
You are here: Articles2017 ICSUSA ARTICLESJuly 2017 - Climate Change: Let’s Cool it and Talk About Ice

Climate Change: Let’s Cool it and Talk About Ice

Perhaps, to take some heat out of the climate change discussion, we can focus on cool data and talk about “ice.” Ice in its various forms [sea ice, glaciers, ice caps], locations and amounts, and what scientists see is happening to it today.

First, let’s examine the image of planet Earth titled, “The components of Earth’s Climate System.” Here we can see the five main contributors to Earth’s weather, and ultimately, its climate.

Weather is what we see out of the window. Averaging weather data and patterns over longer periods of time is called “climate,” and the more data we have, the more firm the scientific conclusions that can be made.

The five Climate components, as indicated in the image [John Mason, Skeptical Science 10/7/13] of Earth, are: Cryosphere, Geosphere, Hydrosphere, Biosphere, and Atmosphere. These all work together in a variety of ways to give us our weather and our climate. It is a complicated system. No sound bites suffice here.

With the focus on the Cryosphere, there are three major areas of our globe where ice is located: Greenland, the Arctic, and Antarctica. Mountain glaciers in the Himalayas, Alps, and several other mountain ranges are also reservoirs of ice, but modest in comparison to the other three. 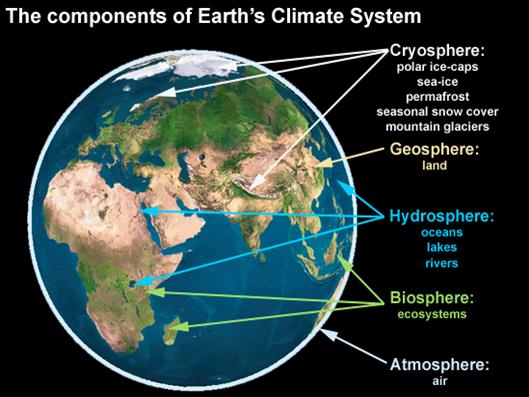 So, what is going on in, or on, Greenland? Big surprise! Lots of ice melt is occurring. See the graph “Declining Ice Mass in Greenland” from 2002 to 2016 on the NOAA climate.gov website. We must realize that the ice cap in central Greenland is huge and up to about 10,000 feet thick [2 miles].

The data set starts in 2002 with the launch of GRACE satellites which can measure ice mass loss. The dotted line across the top is the baseline for the ice mass in April 2002. While the amount of ice lost varies annually, estimates are that the ice mass is decreasing by about 270 gigatons per year on average over the last 14 years. [One gigaton equals 1,000,000,000 tons.]

Ice melts only when heat energy is available, so this process of turning solid ice to liquid water requires a lot of energy. This energy comes from increased energy in the atmosphere and in the ocean waters around Greenland. 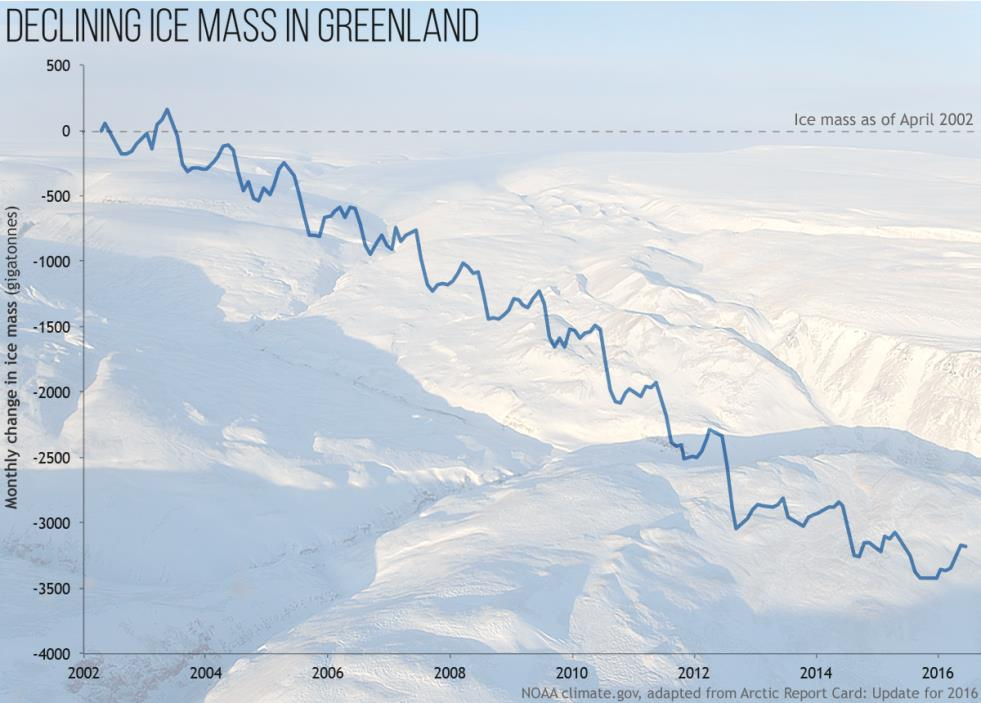 So what is happening in Antarctica? The story here is a bit different.

The air temperatures in this region do not get above freezing [32 degrees] for any length of time and so surface melt is relatively small.

However, most of the ice lost from Antarctic glaciers as they flow off the land is caused by warmer ocean waters that eat away the glaciers or ice shelves from below. As these ice shelves melt and shrink in size, the flow of the massive land ice behind them, literally ice-rivers, accelerates as there is less ice to hold them back.

See the NASA graph titled, “Antarctica Mass Variation Since 2002.” It is only recently that significant ice mass on the Antarctic continent has been observed. In the time interval 2008 – 2010 small changes began to happen and since then mass loss began to accelerate as can be seen.

Research is continuing since the logistics, distances involved, and cold temperatures, present many challenges to getting a firm handle on how Antarctica is responding to increased global warming.

A crack has developed on the “Larsen C” ice shelf in Antarctica that has grown to over 120 miles long. Only an 8 mile portion of the shelf remains connected and once this berg becomes detached, it will be the size of Rhode Island, and float around the southern ocean for decades. 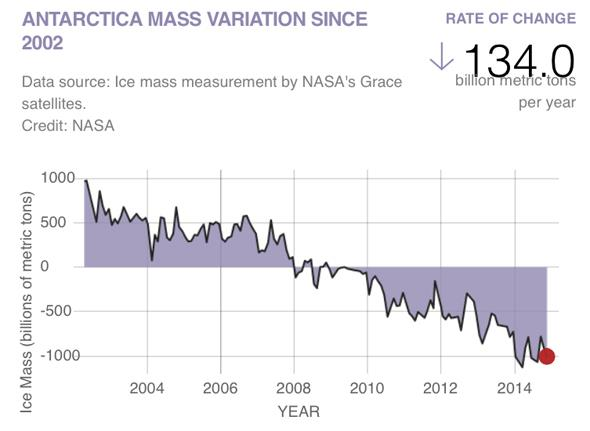 The data on Arctic Sea Ice extent is especially telling. See the graph from the NSIDC titled “Arctic Sea Ice Extent.” The dark line in the center of the shaded area is the average data for the 30 year period 1981 to 2010. The more recent years including 2016 are far below that line and show how much the ice coverage has shrunk in the warmer months compared to the past. We are talking about 4 million square kilometers less ice than just a few years ago! 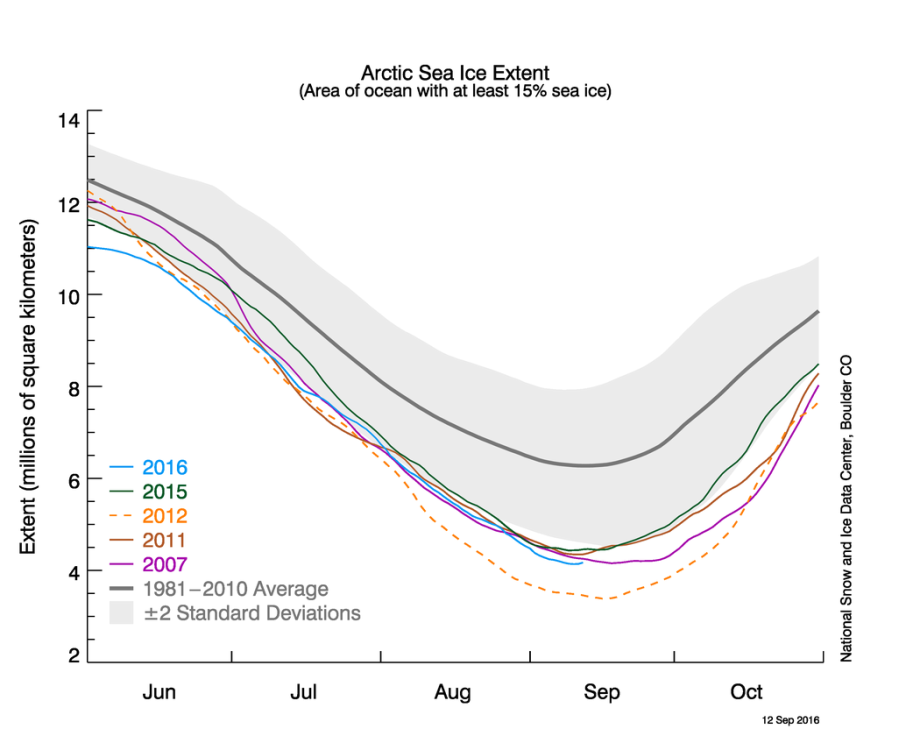 Meanwhile sales of gas guzzling trucks and SUV’s are up over 10% so far this year.