In 1900, New York City had approximately 120,000 horses hauling people and goods around the streets of the city as “The Big Apple”, as it is now known, went about its daily business. Based on simple biology the horses in NYC alone delivered over 2 million pounds of manure per day on the city streets; every day. This horse power required livery stables, hundreds of blacksmith shops, wagon sales and repair businesses, wheelwright shops and hundreds more stores dealing in saddles, harnesses, hay, grain and more.

And, in the course of normal events, many horses died. In NYC at that time about 15,000 dead horses were removed annually from the streets of NYC. And it was not an easy job. [See Redit photo from this period.]

But by about 1910 this whole infrastructure was rapidly disappearing as motorized vehicles took over. In another decade horses and their infrastructure needs were largely gone.

When we consider this, it was an amazing transformation to our economy and way of doing business. The dislocations to people, businesses, employees and other aspects of commerce at that time were huge. It was definitely a “climate change” as odors, flies, many diseases and related issues went away.

It was technological change that brought this about.

This kind of revolutionary transition is happening again today as natural gas and renewable energy are beginning to displace the traditional sources of fossil fuel energy [mostly coal] that have been used togenerate electricity and power the global economy and society. The decreasing costs of wind and solar energy are beginning to have a major impact on how we get our electricity.

The combustion of fossil fuels has served us well in the past. However it has also brought about the release of enormous quantities of the primary greenhouse gas carbon dioxide that is the major contributor to climate change and all of its attendant negative effects on our planet. 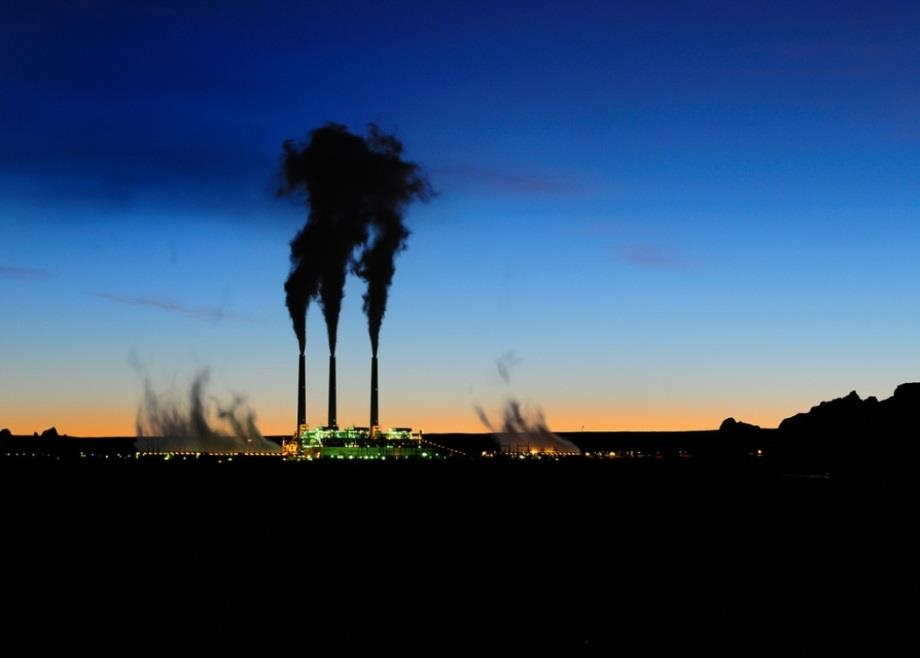 One of the biggest climate polluters in the nation is the coal burning Navajo Generating Station in Arizona near the Grand Canyon. [Photo credit: Cathy Haglund/flikr]. In early January 2017, the owners stated that the low cost of natural gas and the rising costs of generating electricity using coal, makes it too expensive to operate the facility and that a decision whether to close it or not would be made in the next few months.

It was reported in mid-February that this generating plant will cease operation by end of 2019. A lot of different stake holders are involved and many issues remain. But what is clear is that the cost of generating electricity here is more expensive than can be purchased on the open market.

GTM Research published on February 15 th a bar chart here, titled, “FIGURE: U.S. Solar PV Installations, 2010 – 2016”. The horizontal axis is in years, while the vertical axis is Capacity (MWdc) or megawatts installed. The vertical axis also details the type of solar installations. The growth rate and absolute amount installed in 2016 is nothing short of “phenomenal” per GTM.

While this bar chart shows sharp increases every year since 2010, the growth in 2016 in PV installations is up 95% over 2015. It totaled 39% of all new electric generating capacity added. 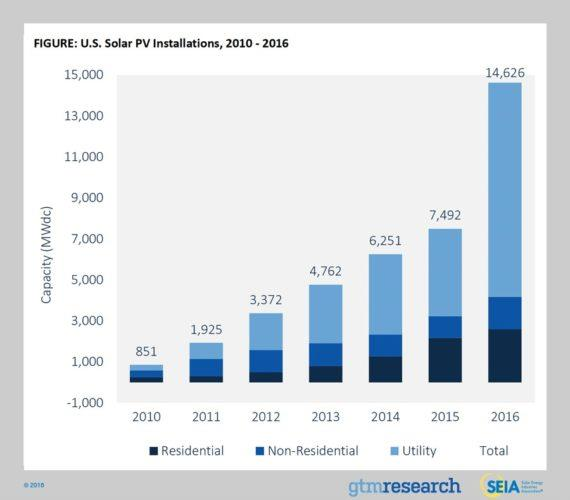 This growth in solar also means growth in jobs. Lots of jobs! In 2016 more than 73,000 new jobs were created in the solar industry with many directed to new construction. On 25 January 2017 Forbes reported that solar employs more people [374,000] in U.S. electricity generation than coal, oil and gas combined [187,000].

Even with this growth the U.S. is becoming a relatively small player on the global stage in terms of total solar installations. China’s installed solar capacity last year grew by 34.5 gigawatts, to a total of over 77.4 gigawatts. This compares to an installed total of 40 gigawatts in the U.S.

Finally, see photo of the Swedish deputy prime minister, Isabella Lovin with her staff, signing a climate law binding all future governments to net zero emissions by 2045. They are serious! 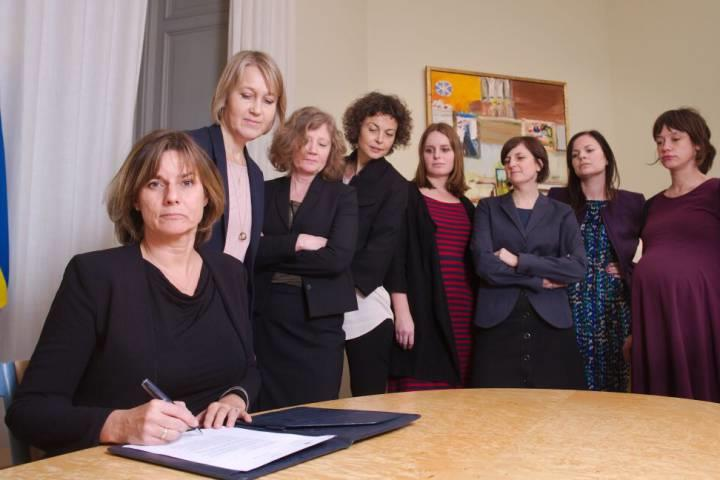