Menu
You are here: Articles2019 ICSUSA ARTICLESJune 2019 - Climate, Its Complexity and the Clean Disruption

Now, please, just be patient. The story is really straightforward. The diagram that follows conveys a global image that depicts the factors that contribute to climate and the science of climate change. This global image, titled “The components of Earth’s Climate System” illustrates the five major components responsible for Earth’s climate. This was posted by John Mason in skepticalscience.com on October 7, 2013.

Brian Rose, University at Albany, teaches a course on climate and in one segment he covers the climate system and its interactions. For the ‘Cryosphere’ component he states that this is “where water is in solid form, including sea ice, lake ice, river ice, snow cover, glaciers” and permafrost [frozen ground].

He goes on to state that the ‘Geosphere’ is “The upper layer of the solid Earth ... which comprises all crustal rocks ... in the uppermost mantle.” OK. And then the ‘Hydrosphere’ includes water in the oceans, rivers, lakes as well as underground.

Then we have the ‘Biosphere’ which comprises us and all of the ecosystems and living organisms, and finally, the ‘Atmosphere’ which is that gaseous envelope that surrounds Earth.

So what happens as human activity changes the nature of our Atmosphere? Burning fossil fuels creates carbon dioxide [CO2], which is a greenhouse gas [GHG] that absorbs infrared [heat] energy that would normally be emitted to space. The atmosphere then circulates this extra heat around the planet where it interacts with the other four components of the Climate System in ways that we are just beginning to fully understand.

Fortunately for us, more than 90% of this excess heat is absorbed in the oceans which have kept the global air temperatures from increasing more than two degrees Fahrenheit ... so far. The oceans arepaying a price for this service however, as this extra heat is bleaching and killing coral reefs around the world.

But, as we continue to put more than 40 billion tons of CO2 into the air each year effects will be seen with far-reaching consequences on all parts of the climate system. Ice will melt, oceans will rise, land areas will be submerged, and the Biosphere changed with extreme weather events [drought, wildfires, major rainfall events etc.] becoming, well, more extreme and frequent.

But humans are changing more than the atmosphere. Earth is losing large portions of the rain forest in Brazil, Indonesia, Africa and elsewhere. No longer will these trees remove CO2 from the air, but by slash and burn agriculture will contribute even more CO2 to the air.

Indeed, a recent report on 6th May by a United Nations-backed panel indicated that with these changes here now with more coming, we are in danger of losing over 1 million species in the near future that provide the very foundation of our existence if civilization does not change course. The 1800-page report was several years in the making by 450 experts from 132 countries.

But, change is possible!

Florida is a case in point where change can be made, and be made rather quickly. Three years ago Florida had very little solar [photovoltaics] even as it kept its name the Sunshine State. The voters changed that by chasing out the “guard dogs” and passing a new law encouraging solar generation of electricity. Florida is now on the way to becoming a global leader.

Florida Power and Light [FP&L] announced 10 new solar projects in 2019 that will bring their solar generating capacity to 2 gigawatts [28 solar projects total] by early next year. This is a lot of power and similar in output from a nuclear power plant.

The company goal is to bring more solar on-line while continuing to keep their customer’s bills lower than 90% of the country!

But there is more from FP&L. Eric Silagy, president and CEO, announced a program two months ago called “The 30/30 Plan.” It involves installing 30 million solar panels by 2030 and is the largest community solar program in the country. In addition they are planning to have the world’s largest solar- powered battery bank by 2021 [by a factor of four] which will replace more than 1,600 megawatts of natural gas-fired generation.

See graph, “Rising renewables” from BP Statistical Review of World Energy. The sharp rise in power generation in the last decade has been remarkable. 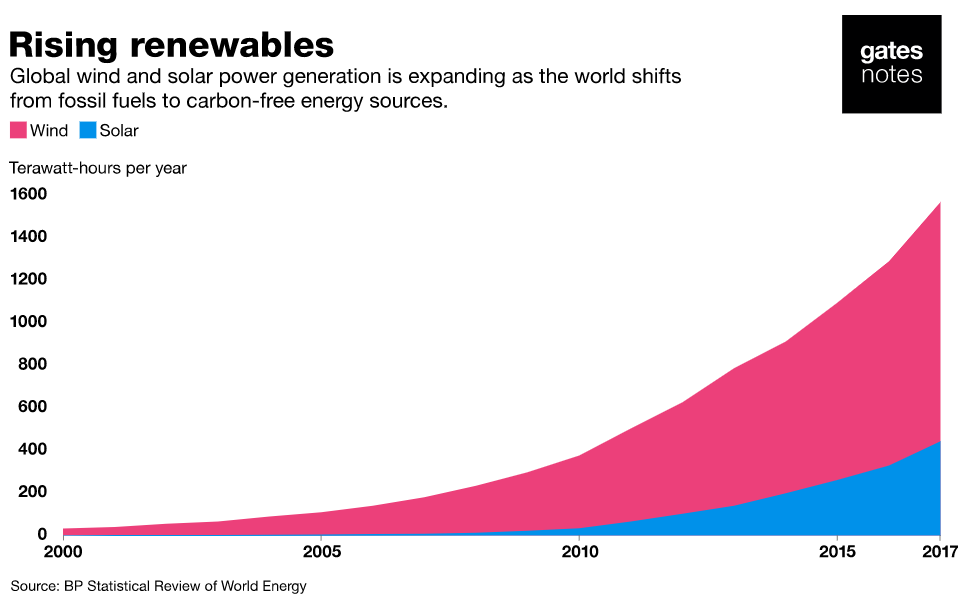 Meanwhile we have other energy dynamics at work. The Southern States Energy Board [SSEB] met in Kingsport, TN in May 2019. While the U.S. administration was talking up “coal,” “clean coal” and trying to be upbeat, the state energy officials and executives had a very different view on the situation. See bar-chart from SSEB, “The Future of Coal?” None; 0% of those officials present thought it very likely/likely that the industry would revive. 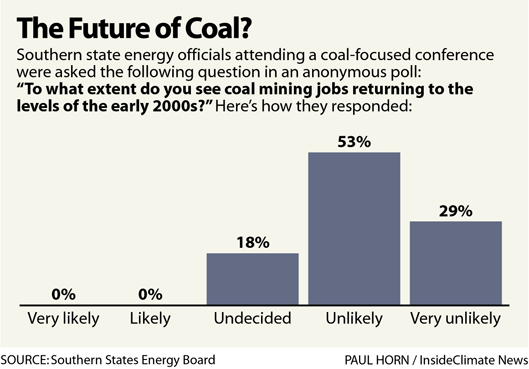 The primary reason is that of cost. The graph “Renewable Energy Costs are Falling” from Lazard tells the story. While coal, nuclear and gas were cheaper 10 years ago, today solar and wind are by far the cheapest source of energy at $43 and $42 per megawatt-hour. The comparable cost for coal is $102. 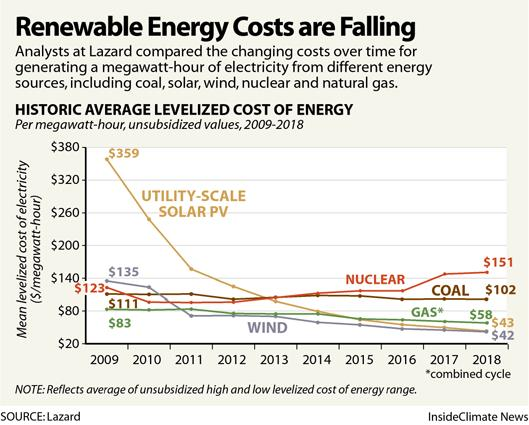