Menu
You are here: Articles2014 ICSUSA ARTICLESNovember 2014 - War on Coal? Absolutely Not, But We must Stop Burning It

War on Coal? Absolutely Not, But We must Stop Burning It

It was an interesting scene. It was in the new “Cosmos” TV science series that aired this year, narrated by the physicist Neil deGrasse Tyson. In it he describes what it would be like for us to see emitted carbon dioxide from man’s activities if it was blue in color.

A traffic scene in a city is shown with this blue colored fog being emitted from tailpipes and smokestacks. But as we know, this greenhouse gas is colorless, tasteless and cannot be detected with our senses. He succinctly states that if visible it would not be too long before citizens demanded that something be done with this pollutant.

Alas, this is not the case, but indirectly, we may get there.

What is interesting is the fact that some minor constituents in coal are getting most of the attention from health organizations and regulatory bodies; for a good reason. One ingredient at low levels in coal is mercury [symbol Hg].

The fact that mercury is a neurotoxin has been known for some time. It was clearly manifested in Japan in the 1950’s with people living in Minamata, Japan. Those citizens living near the bay, and who ate quantities of fish and shellfish, developed neurological symptoms that were heartbreaking and deadly.

After years of study, and some delays by industry, it was found that mercury effluent from a nearby factory was the cause. Wikipedia has an excellent summary of these events. The bay had so much mercury in the sediment that it was later mined and mercury recovered as part of a cleanup.

It was in 2011 that EPA issued the first national standards for mercury pollution from power plants. The new rules were intended “to protect American families from power plant emissions of mercury and toxic air pollution like arsenic, acid gas, nickel, selenium, and cyanide.” [See www.epa.gov/mercury/regs.]. 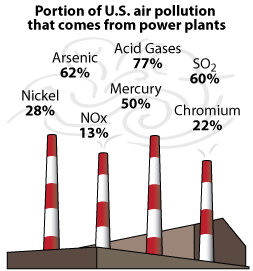 The data table, “Sources of Mercury Emissions in the U.S.” tallies the tons of mercury discharged into our environment on an annual basis. Mining and metallurgy activities also contribute to the total but are not listed here.

Sources of Mercury Emissions in the U.S.

Most coal burning plants are in the eastern U.S. and a recent research paper [cenm.ag/env27] details the deposition and how these mercury emissions have accumulated. The authors found that there were up to 16 times the amount of mercury in the soils of the northern U.S. forests as in the soils in the southern forests as a result of the prevailing west-to-east wind patterns.

Another report in May 2014 [http://cenm.ag/shell] found that people and animals in the Arctic have high levels of mercury in their tissues. The Arctic ice, having trapped years of mercury depositions, is melting and releasing this element into the marine environment. And it does not stop here.

A research article in Nature [7 August 2014, Vol 512, page 65-69] found that anthropogenic mercury in the oceans was triple what they were before the industrial revolution. The authors [including one from Woods Hole Oceanographic Institution, MA] collected thousands of water samples over 8 years from four oceans at depths of up to 14,000 feet. They found that “the ocean contains 60,000 to 80,000 tons of pollution mercury,” with 2/3rds “in water shallower than 3,300 feet” and of recent origin.

This does sound like we are fouling our nest and reason enough to phase out coal combustion.

Indeed the process has started.

In the bar chart labeled “Coal Unit Retirement Announcements...” we can see the megawatts [MW] being retired by month starting in Jan 2010 up to Aug 2014. That month sets a record of 6,377 MW of coal-generated electricity announced for retirement. 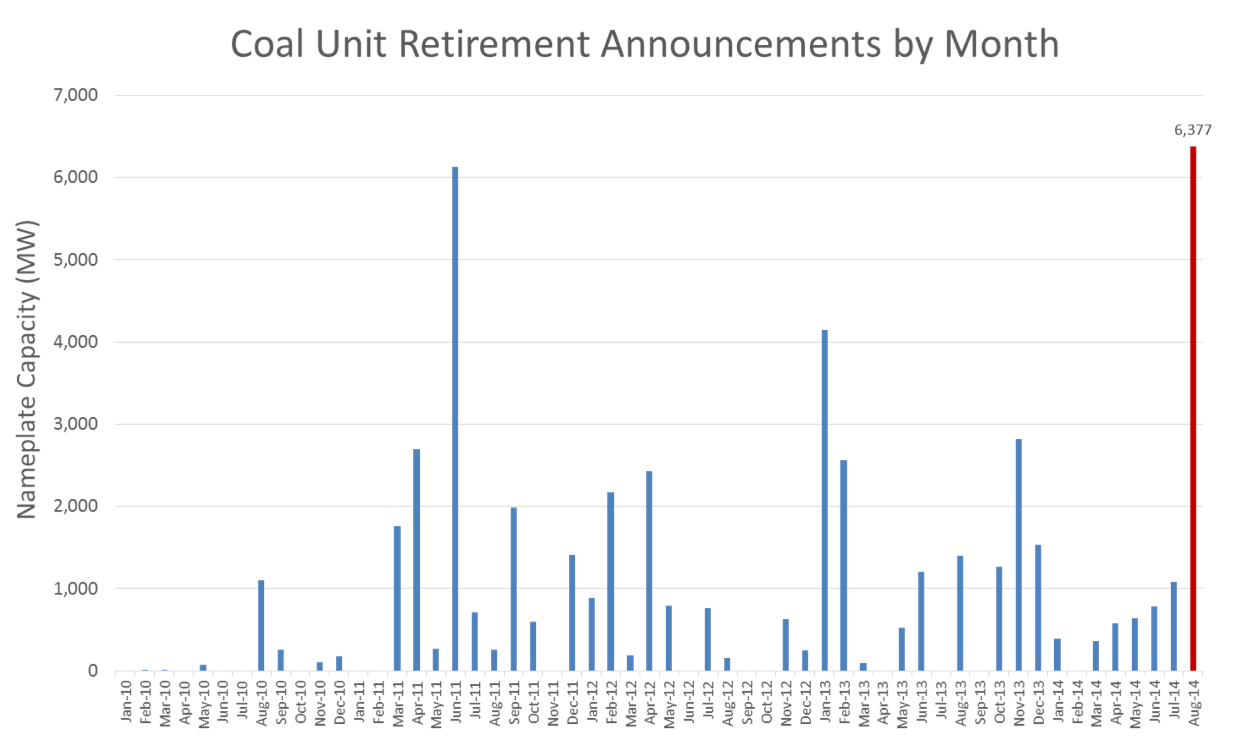 The graph with the vertical label, “US Dollars per Metric Ton” tracks the cost of coal from Aug 2009 to Aug 2014. The sharp drop in price suggests reduced demand and market forces that appear to be saying that coal is slowly being phased out.