Most North Country residents know that the Battle of Plattsburgh took place in September 1814 with the naval portion taking place on September 11 of that year. Master Commandant Thomas Macdonough won that decisive victory for America which helped win the War of 1812.

But how about another naval battle in September 1813? This was when the Battle of Lake Erie took place between a fleet of 9 American ships against a group of 6 British vessels. That September 10th, U.S. Captain Oliver Perry stated in a communique, “We have met the enemy, and he is ours.” He was right, and it proved to be a significant victory for the American efforts in that earlier stage of the “War of 1812.”

Let’s fast forward to the 1950’s when the cartoon series Pogo appeared. The creator, Walt Kelly, used his daily cartoon strips to bring forth the “foibles of mankind and the nature of the human condition.” One of the more salient phrases he wrote was, “We have met the enemy and he is us.” The finalized
version of this quote appeared in a 1970 anti-pollution poster for Earth Day. [Pogo, Wikipedia.]

Indeed it is us.

The rapidly rising atmospheric levels of this GHG are anthropogenic in origin: we humans are the cause for this increase. This comes from the combustion of vast amounts of gas, coal, and oil, and land use changes [agriculture, and deforestation tropical forests].

There is a chemical signature in this gas that proves that most of this increase is of fossil fuel origin.

There are other GHG’s but as one can see in the pie chart titled, “U.S. Greenhouse Gas Emissions in 2015” {EPA], about 82% of the total is CO2. Three other primary sources are methane, nitrous oxide and several fluorinated gases. 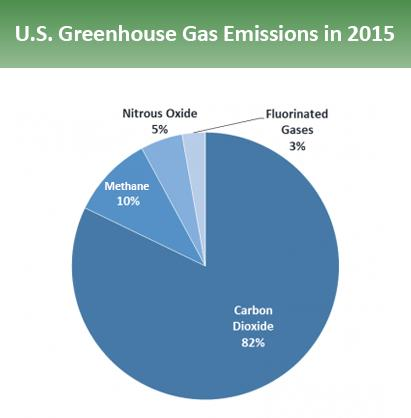 One key question is, how long does CO2, emitted by us, remain in the atmosphere?

See one estimate in graph labeled “Decay of Pulse CO2 Emissions” [Archer D., J.Geophys.Res.,110,2005]. This shows about ½ [about 110 pounds] of those 220 pounds will be picked up by Earth’s carbon sinks [vegetation, oceans, weathering] in the next 50 years. The other half will remain in the atmosphere where its inherent properties will continue to trap outgoing heat and continue to warm our planet. 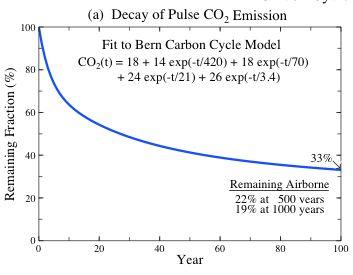 Full geological elimination of that original amount of CO2 will take hundreds of thousands of years!

So, in a negative sense, this is a gift that keeps on giving!

Thus, in pursuit of some activity where we consume gasoline, the global warming effects of that activity will last for millennia. And the same goes for whatever vehicular activity one does the next day; and the day after that.

Now consider that the U.S. has about 264,000,000 passenger vehicles [U.S.DOT, Wikipedia] and you can get some idea of the scale of the problem we all face and all contribute to. Estimate is that over 1 billion cars are in use now.

Meanwhile, the NOAA website no longer links human activity with rising GHG emissions as it did in 2016. It now states, “… it’s a complicated topic that can be difficult to explain.” 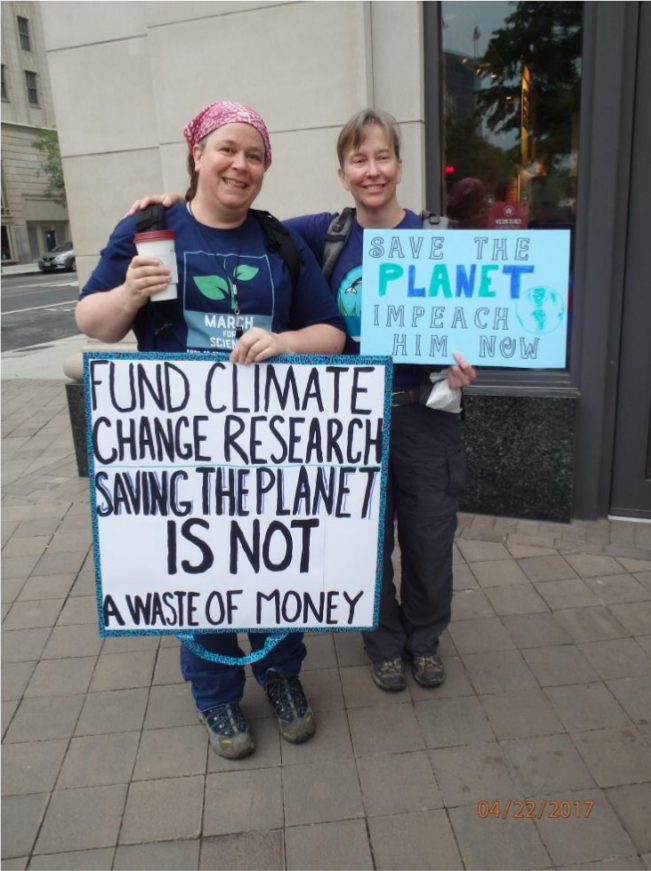