Menu
You are here: Articles2011 ICSUSA ARTICLESJuly 2011 - Higher Temperatures and Drought Appear to be the New Norm

In the 1980’s, scientists began to gather data showing that the protective levels of ozone in the stratosphere, which absorbs much of the harmful UV rays from the sun, was being destroyed by man- made chemicals such as chlorofluorocarbons. These compounds are used in refrigerators, air conditioners along with many other uses.

The global alarm, and the science, was so strong that the leaders of the industrialized world signed the Montreal Protocol in 1987 banning some, limiting the use of others and urging development of newer, more ozone friendly compounds. The public accepted the data and possible serious health possibilities. Now, when we are out in the sun, many of us use sun block to protect our skin from the harmful effects of UV radiation.

Attempts by lobbyists and others to spread doubt about the science were unsuccessful and Congress and President Reagan approved this legislation quickly.

Today the science is just as strong: green house gases [GHG], primarily carbon dioxide cause global warming. Carbon dioxide is at the highest level in more than 800,000 years. 97% of actively publishing climate scientists have expressed concern, if not outright alarm, about GHG that are bringing about ‘climate change’. However, many in Congress and the U.S. do not believe that GHG are a concern and no actions are being taken to reduce these levels.

In 2007 the Intergovernmental Panel on Climate Change [IPCC] issued their 4th report which stated, with greater than 90% probability, that both the planet was warming and that human activities were primarily responsible.

The same science and same data have convinced all of the major national science bodies on the planet, including our own National Academy of Sciences, that there is cause for alarm.

The IPCC is currently assembling about 1500 scientists from around the globe to evaluate and integrate new data published since 2007 and will issue a new report in 2013. There are over a 1000 new peer reviewed research articles for them to consider and many wait eagerly for their interpretations and recommendations.

Recently, the Vatican’s Pontifical Academy of Sciences has weighed in. A working group of scientists appointed by the Academy, and chaired by the Nobel laureate Werner Arber, a Protestant, issued a report in May 2011 [free on line]. The report declares, without qualification and with utmost urgency, that “global climate change is occurring, that humans bear responsibility for it, and that it is our gravest moral imperative to reduce carbon emissions as quickly as possible.”

Shortly after, the Stockholm Memorandum [free on line] was issued after a meeting in Sweden, 16-19 May 2011. 17 Nobel laureates signed the document and asked for “fundamental transformation and innovation in all spheres and at all scales in order to stop and reverse global environmental change.” It concludes “that we have entered a new geological era: the Anthropocene, where humanity has become the main driver of global change.”

The 2007 IPCC Report, The Physical Science Basis, pages 299 -316, discusses “Changes in Extreme Events.” It states: “There is increasing concern that extreme events may be changing in frequency and intensity as a result of human influences on climate.” These extreme events include droughts, floods, rainfall, increased temperatures, heat waves, hurricanes and winter storms. So let’s look at some very recent temperature data and see what that data shows. The Capital Climate bar chart with “2010-11 U.S. Temperature Extremes” data from National Climate Data Center [NCDC] 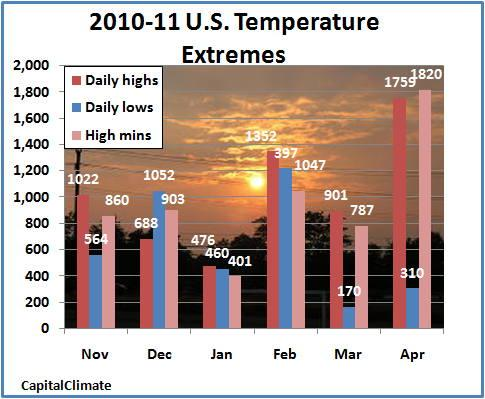 show that “Daily highs” [left bar of each three] far outnumber “Daily lows” [middle bar]. In a stable climate one would expect the ratio of high and low temperatures to be close to one. The right hand bar shows that the daily high minimum temperatures are also increasing. This is also consistent with global warming effects caused by GHG. 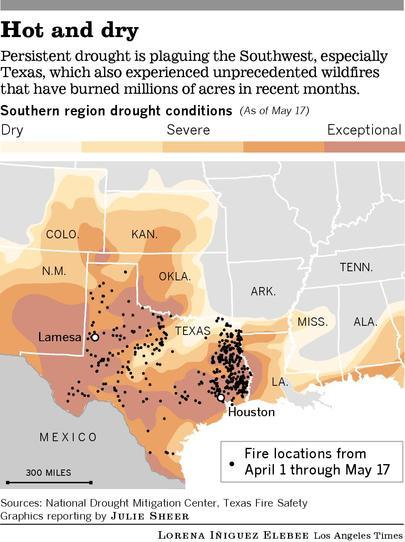 The second figure or map is labeled “Hot and dry.” The drought conditions reflect extreme lack of rainfall for the past 12 month period, and a new term is used here for the first time: “Exceptional.” In many areas there has been no rainfall for 6 months or more. The wildfires have burned about 4 million acres in Arizona, New Mexico and Texas alone. 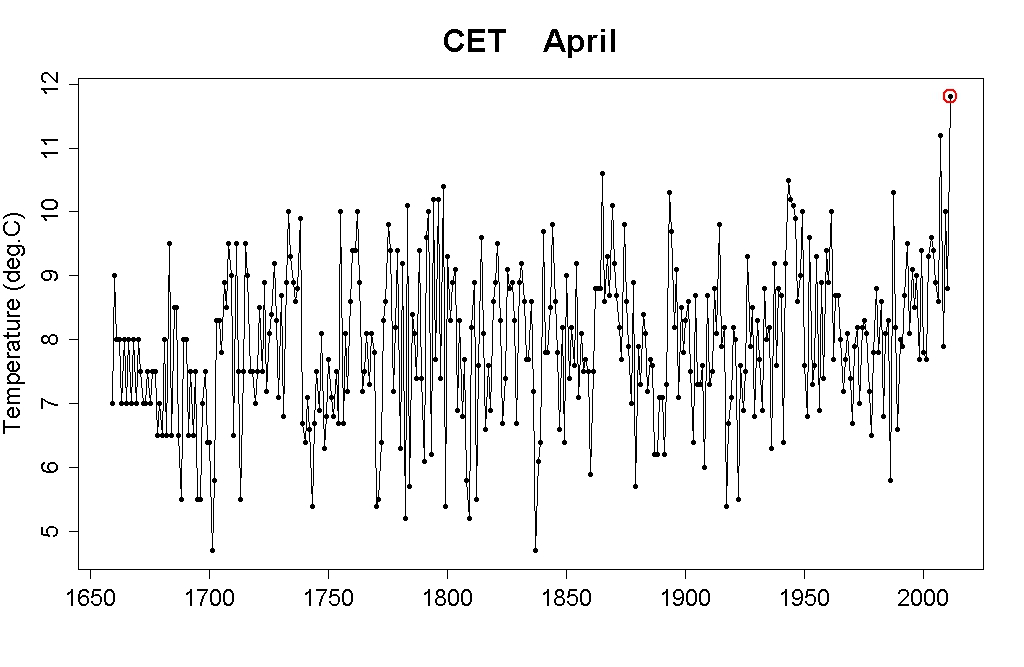 While there was ample news of the snowfall in London in December 2010, there has been little coverage of the fact that April 2011 was the hottest in the Central England Temperature record going back 350 years [see CET chart from the UK Met Office].

In addition, April is tied for 4th hottest on record globally.