"And yet it moves". Legend has it that Galileo Galilei said this at age 70 in 1633 after he was forced to renounce his life's work that demonstrated the earth revolved around the sun. The church doctrine and the inquisition at that time insisted that the earth was the center of the world; his work was heresy and none of his research in mathematics, astronomy or physics could convince them otherwise. Because of his abjuration, a heartbreaking read incidentally, prominence and age, he was not tortured or killed but lived the rest of his life under house arrest.

Now let's fast forward to the 21st century. The chemistry and physics of carbon dioxide are well known and have been for over a century. Indeed in 1896, Svante Arrhenius calculated by hand, the degrees of warming expected from a doubling of the level of this gas, and it is within the range of calculations today. This molecule, consisting of two atoms of oxygen and one atom of carbon, has this inherent property of absorbing infrared radiation.

Denial in some quarters, however, still seems to be the order of the day with regard to the prominent role of carbon dioxide in climate change. All of the basic physics, experiments, data and other scientific studies done over the last century or more, that have proved otherwise, notwithstanding.

Indicators of a Warming World

Meanwhile, as global fossil fuel combustion and emissions continue to increase, the case for climate change, aka global warming, continues to strengthen. In June 2010, The National Oceanic and Atmospheric Administration (NOAA) released "The 2009 State of the Climate Report". The report is free and available on the web: www.ncdc.noaa.gov/bams-state-of-the-climate.

It reflects the consensus of more than 300 scientists from 160 research groups in 48 countries. It "draws on data for 10 key climate indicators that all point to the same finding: the scientific evidence that our world is warming is unmistakable". 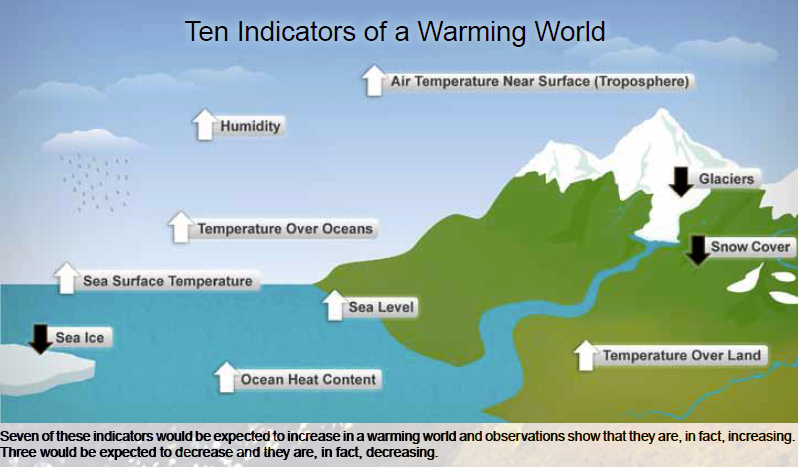 The chart here, "Ten Indicators of a Warming World" succinctly summarizes this.

The three black arrows show the declining sea ice, glaciers, and spring snow cover in the Northern Hemisphere. Jane Lubchenco Ph.D., administrator of NOAA: "For the first time, and in a single compelling comparison, the analysis brings together multiple observational records from the top of the atmosphere to the depths of the ocean". The data were collected from "diverse sources, including satellites, weather balloons, weather stations, ships, buoys and field surveys". All of these data "point to the same conclusion: our planet is warming".

The U.S. Senate failed in July 2010 to address carbon dioxide reductions and climate change in any way. This failure to act is even more surprising in view of the large parts of the globe that are experiencing extreme weather events with tens of millions of people displaced and thousands dead due to flooding, fires, heat, and extreme rainfall.

Indeed, Don Brown, professor of Environmental Ethics, Science and Law at Penn State University suggests that the Senate inaction "is a moral lapse of epic proportions". Most of us adults living today will not pay the full price of this policy mistake but our grandchildren will. See book "Storms of My Grandchildren" by James Hansen (Director, NASA Goddard Institute of Space Studies).

In the face of this inaction, engineering the planet's climate system is attracting the attention of some scientists, engineers, venture capitalists and others. This might provide a very different solution to our global heating problem. It is an approach that is nothing less than man taking control of Earth's climate system.

Geoengineering is defined as "the deliberate large-scale manipulation of the planetary environment to counteract anthropogenic climate change," (whew) and includes a number of different disciplines. All of the suggestions involve either removing carbon dioxide from the atmosphere or blocking some of the incoming energy from the sun. All of the scientists emphasize however, that this approach cannot replace emission cuts, and that these are an essential part of any plan to address climate change.

One of the options for removing carbon dioxide includes fertilizing the oceans with iron particles in order to promote the growth of tiny marine plants called phytoplankton. Presumably these plants would grow, absorb the gas and ultimately, fall to the ocean depths taking the carbon with it. A few small trials have not been promising, however, as other nutrients then become growth limiting and there is concern about creating dead zones in the oceans (Nature News 453,704(2008)).

Other options for removing the gas include; planting trees to take CO2 out of the air, turning wood into charcoal, which is basically all carbon and quite inert, and burying it {Nature Communications 1,10Aug2010); or extracting the gas directly from air (or smoke stack) compressing it into a liquid, and putting it into a deep, stable geological formation.

The sun-blocking methods have produced the most suggestions. One is to send ten trillion (that's correct) 60-centimeter (about two feet) discs in rockets to a height of about one million miles towards the sun, over a 30 year period (Royal Society, Geoengineering the Climate, Report p32). Another is to develop a fleet of 1500 ships to send up plumes of water vapor to increase cloud cover (The Return of Dr.Strangelove, p3, June2010, Clive Hamilton).

Still another is to inject enormous amounts of sulfur dioxide gas into the stratosphere (6 to 36 miles high) using either artillery shells (Nature News 357, 18July2010), or a fleet of high flying airplanes in order to create sulfate aerosols that would reflect solar radiation back into space.

There are problems with all these approaches such as cost, energy required to produce the desired effect, and the fact that once one starts down this path the schemes require continued replenishment. In addition sulfur dioxide produces sulfuric acid when combined with rainfall which dissolves concrete and limestone in buildings, acidifies lakes and streams and has other effects on the biosphere.

Modifying the climate by one country may also cause significant problems for neighbors such as changed rainfall patterns (Journal of Geophysical Research 113, D16101,2008). This and other issues have been raised in recent conferences on this topic. Indeed, a recent book "Hack The Planet" by Eli Kintisch is one of several that delves much more deeply into this topic for those interested. One author laments that there is no practice earth on which to test, evaluate and refine these technologies.

Incidentally, the Clear Air Act first passed by Congress in 1955, and modified several times since then, is intended to reduce the levels of sulfur dioxide in the atmosphere because of its ill health effects on man and deleterious effects on the environment.

It seems, therefore, we are caught between a rock and a hard place so to speak. Either we make a concerted effort to reduce our emissions or we try and manage the planet's climate with our hand on the switch.