It is almost four years ago to the day that people in the North Country experienced something unusual.

When residents went outside they were greeted by a haze that smelled like smoke. And smoke it was.

There were over a 100 wildfires burning in southern Quebec, starting in late May 2010, and the winds were blowing it directly into northern New York and the New England region. Over 220,000 acres were involved. See NOAA map of this northeast region showing dark spots [upper left] for the fire locations in Quebec and the plumes of smoke of varying intensity covering portions of the northeast. 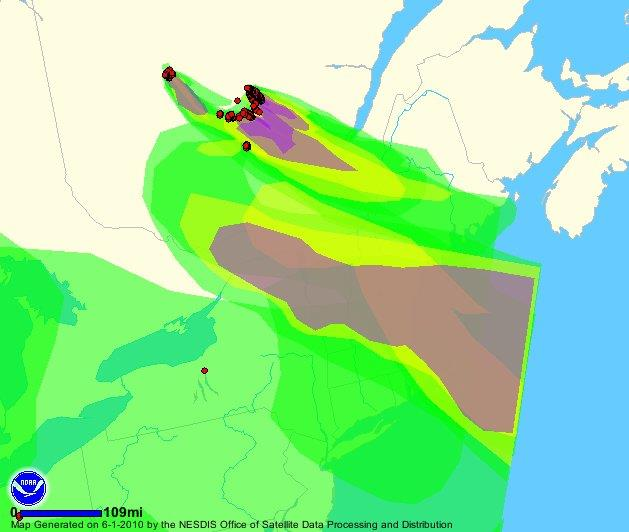 See photo [courtesy of Boston.com] of sailboats in a hazy Boston Harbor on May 31, 2010 with the Prudential Building in the background. 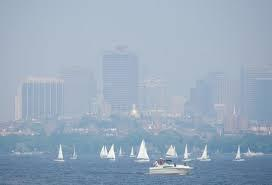 What made this event of interest to scientists was the opportunity to look at long- distance transport and composition of volatilized material from those forest fires. Some of this information appeared in apublication in the American Chemical Society journal Environmental Science & Technology 2010, 44[22], pp 8435-8440 in October 2010. The authors were from the Center for Air Resource Engineering and Science and the Department of Civil and Environmental Engineering both at Clarkson University Potsdam, New York.

The results showed an 18 fold increase in the PM 2.5 , small particles that penetrate deep into the lungs and significant increases in mercury [Hg] levels among other measurements. This mercury was in the gaseous form as well as attached to particulates carried by the winds.

Where did this mercury, a potent neurotoxin, come from?

This issue is a perfect example of an externality. In addition to mercury, coal also contains Arsenic, Selenium and other toxic components. When burned these are carried downwind and deposited everywhere.

The cost of electricity from coal does not take into account the potent toxins released into our environment that impact humans and other parts of the ecosystem. This includes fish with restrictions on consumption because they contain too much mercury.

We are all part of a whole and what happens seemingly far away, has an impact elsewhere. This is part of the social cost of carbon we all incur, even if we use energy sources other than coal.

For many decades Ontario, the most populous Canadian province, burned large amounts of coal to generate electricity as well as to power their extensive mining industry. [According to Statistics Canada 2013-01-04, the Province of Quebec does not burn coal.]

Recognizing these health hazards, along with the impact of emitting large amounts of the greenhouse gas, carbon dioxide, on the climate, Ontario took steps to stop burning coal. They will achieve their goal by year-end 2014, and become the first large government entity in North America to fully eliminate coal as a source of electricity generation.

“Ontario’s policies have made them ... a North American leader in renewable energy and created a strong green energy manufacturing sector” [North American Windpower May 2014 Volume 11 No. 5.]

Ontario has 18.5 gigawatts [GW] of renewable energy online or planned. This includes more than 9.5 GW of solar, wind and bioenergy [the balance is hydro]. In about a decade their wind industry has grown from just 10 wind turbines to more than 1,200 today.

Their remaining energy needs are met by gas and nuclear. As Ontario moves beyond coal they plan to continue development of renewable power.

The 800,000 year CO 2 Concentration chart “We Are Here” captures the heart of the issue. Levels of this greenhouse gas have not been this high since long before humans walked this planet. 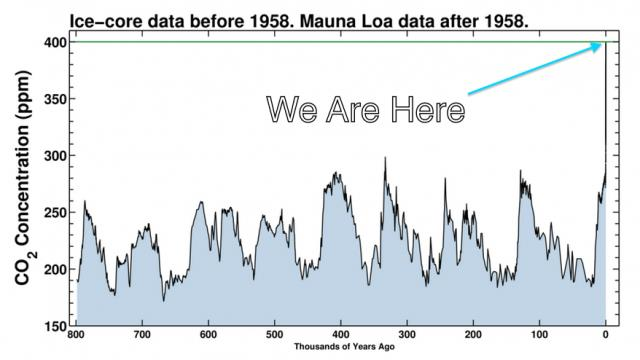 The AAAS [American Association for the Advancement of Science], the premier science based organization in the United States, is now getting involved in a policy debate with an unprecedented
urgency in their voice:

"... we consider it our responsibility as professionals to ensure, to the best of our ability, that people
understand what we know: human-caused climate change is happening, we face risks of abrupt,
unpredictable and potentially irreversible changes, and responding now will lower the risks and costs of
taking action."

... “Americans must act swiftly to reduce greenhouse emissions – and lower the risks of leaving a climate
catastrophe for future generations.”