Menu
You are here: Articles2013 ICSUSA ARTICLESFebruary 2013 - Three Numbers That Will Define Our Climate Future

February 2013 - Three Numbers That Will Define Our Climate Future

Climate data from all areas of the globe continue to pour in and the conclusions are always the same: our planet is heating up.

A December 23, 2012 press release from the National Center for Atmospheric Research [NCAR] in Boulder, CO details temperature changes on the Antarctic continent. The data were presented in a peer-reviewed paper in Nature Geoscience [doi:10.1038/ngeo1671].

The Byrd Station [star], on the map of Antarctica, has had a temperature increase of 4.3 degrees Fahrenheit in average annual temperature since 1958. This is almost three times larger than the average for the rest of the globe: the concern is that the glaciers will slide more quickly into the sea raising ocean levels.

The color scale, experimental design, and statistics to support this data can be found in the NCAR/UCAR Atmos News Release of December 23, 2012, “West Antarctica Warming Three times Faster...” The black circles are other permanent research stations with long-term temperature records. 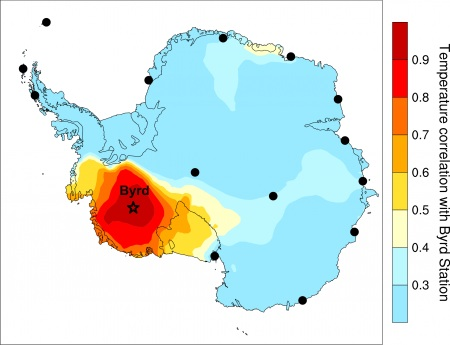 Closer to home, the map of the United States from the National Climate Data Center shows the temperature ranking for the most recent 12 month period through December 2012. For the nation as a whole, it is the warmest year on record in the 118 year database: by far. 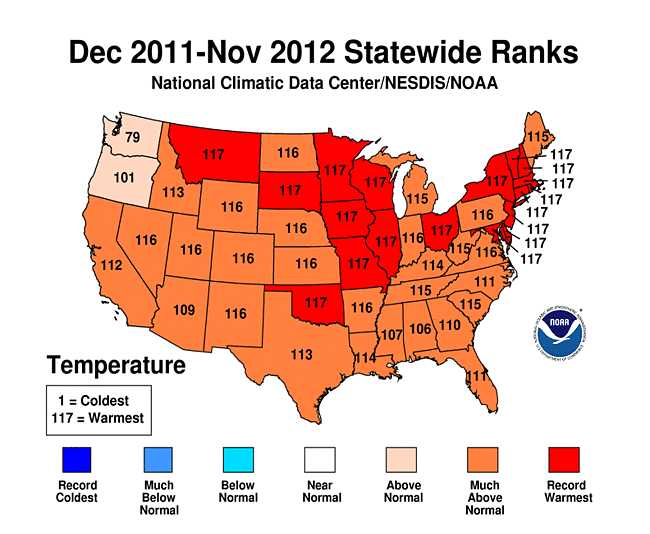 In early January 2013, the Jet Propulsion Laboratory at California Institute of Technology issued the following graph of sea level changes over the past 20 years. The science and the technology they developed, with their French partners, have given us the most precise measurements yet of Earth’s global sea level changes. The data are from four different satellite and radar instrumentation systems and show increased sea levels over this period of time. 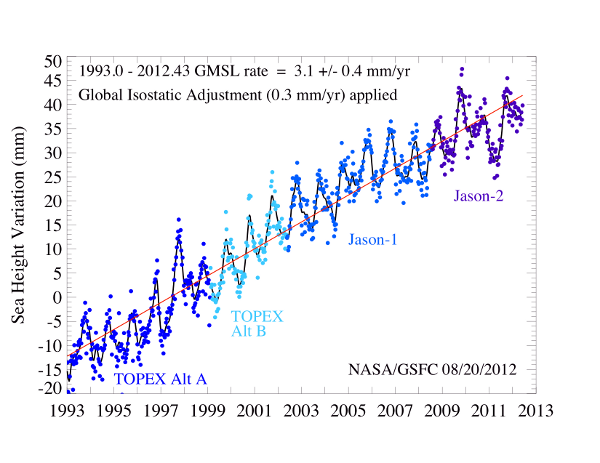 Everywhere on the globe these data, and more, support the same conclusion: our planet is warming.

But these are not the numbers that will define our climate future and those of our grandchildren. What will define that future are just three numbers.

The First Number is 3.6 degrees Fahrenheit.It was the scientific view in the 1990s that any global temperature increase should be kept below 3.6 degrees F. This assessment and goal first gained prominence in 1995 at a climate conference chaired by Angela Merkel. 3.6 Degrees was also agreed to in 2009 at the G8 and the so-called Major Economies Forum, and later that same year incorporated into the “Copenhagen Accord.”

So far, in the last century, the temperature of our planet home has increased by 1.5 degrees F. Based on the experience, observations and knowledge gained in the past few decades many scientists are now worried. The recent climate data suggest that 3.6 degrees may be far too high an acceptable target. The super-storms, super-droughts, rapid melting of the Arctic ice, high temperature records and all manner of recent extreme weather events have got many scientists very worried.
Kerry Emanual of MIT writes, “Any number much above” 1.5 degrees F. “involves a gamble.” Jim Hansen, Director of the Goddard Institute of Space Studies and probably the most prominent climatologist today, has stated that 3.6 “degrees of warming is actually a prescription for long-term disaster.”

The Second Number is 565 gigatons. The understanding is that this is the total amount of additional carbon dioxide we can pour into the atmosphere from fossil fuels and still have some hope of staying below 3.6 degrees F. The number is not exact and it may actually be less since the carbon dioxide already released will continue to raise the planets temperature. However, at current rates of emissions of about 35 billion tons per year and climbing, we will pass that 565 gigatons number in less than 15
years. Then emissions must drop to zero, a virtually impossible feat.

Now, the Third Number, 2,795 gigatons. This is the amount of coal, oil and gas that are proven global reserves, readily available, and that we plan to burn. The fossil fuel companies’ stock prices, evaluations and dividends are all based on this inventory; and they are still searching for more. This number is more than five times the amount that will bring the planet temperature increase to 3.6 degrees.

This is the crux of the enormous issue we face today.