Menu
You are here: Articles2015 ICSUSA ARTICLESAugust 2015 - “Laudato Si” (Praise Be to You); Pope Francis Sides With Climate Change

“Laudato Si” (Praise Be to You); Pope Francis Sides With Climate Change

In late June 2015, Pope Francis issued a 184 page encyclical, “Laudato Si”. This was not a spur of themoment decision but evolved over many months with the Pontifical Academy of Sciences [PAS] playing a leading role. In April of this year, “scientists, religious figures and policymakers gathered at the Vatican to discuss the science of global warming and the danger posed to the world’s poorest people” [Nature,p596,Vol520,30April2015].

The chancellor of the PAS, Bishop Sorondo, said: “essentially all documents published now accept as a scientific truth that climate change is due to human activity” [ibid p597]. The encyclical goes even further and mentions the “relentless exploitation and destruction of the environment and says apathy, the relentless pursuit of profits, excessive faith in technology, and political shortsightedness are to blame” [NYTimes June 19, 2015].

With about 1 billion Catholics around the world maybe this encyclical will get peoples’ attention and, hopefully, cause policy makers to take action.

Meanwhile the planet continues to heat up and burn. In 2014 Seattle had the warmest July and August on record with an average high temperature of 80 F. This is happening in a city where the need and use of home air conditioning is rare.

This July 8, 2015 map [AccuWeather.com] of northwestern U.S. indicates that temperatures in that region are 15 to 30 degrees F. above normal, with records being threatened or broken daily. Seattle had four consecutive days of record highs, and Ellensburg, Washington, was 17.2 degrees above normal early in the first week of July. Boise, Idaho, was above 100 degrees for 9 consecutive days. 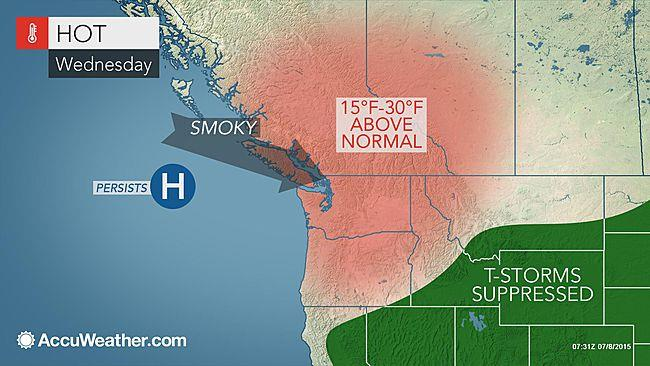 Compounding the heat wave is smoke over these states from the many forest and tundra fires burning further northwest. While fires are a natural part of the ecosystem in the Arctic, the number and areaburned is on track to set a new record. Over three million acres have burned so far and the fire season is just beginning. This area is equal to 1⁄2 the size of the Adirondack Park!

Note the wunderground.com map of northwestern North America “Made by Sam Carana...”. This map highlights some of the fires burning in Alaska and northern Canada. These fires are releasing enormous quantities of the greenhouse gas [GHG] carbon dioxide. The large dark area on this map shows the extent of the dense smoke covering a good part of Alaska and the resulting health hazard it represents. This smoke, consisting largely of black carbon particles, traps more heat in a positive feedback loop. 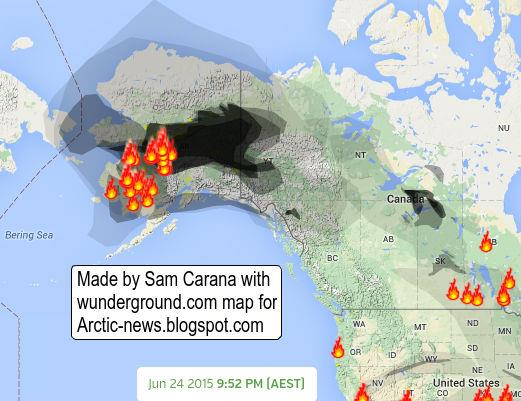 Another detailed map [not shown here] from Alaska Interagency Coordination Center “Fire Information,” shows where over 600 wildfires have been reported in AK and some 4,000 fires in Canada as of early July. The smoke from these fires in AK, and Canada, was seen in Wisconsin and in Ohio
sunsets and moving east.

On July 7 th , when the smoke reached Oklahoma, the Oklahoma Department of Environmental Quality announced that high levels of fine particulate matter were detected. People with health risks were advised to take precautions.

Not to belabor this global warming effect, Pakistan had its own heat wave in June 2015 as well. Over 1400 deaths were reported as temperatures soared above 112 degrees F. in Karachi with some higher readings [120 degrees] elsewhere. In India, earlier in May 2015, a heat wave directly responsible for over 2,500 deaths was reported. Many poignant and wrenching photos from both locales are available on the internet.

On the ‘cooler side’ are some emerging actions and solutions to the issue of global carbon emissions and
climate change.

Hawaii is the most fossil fuel dependent state in the U.S. and spends about $5 billion annually on oil imports. Their legislature passed in June 2015, a plan which the governor has since signed, to require the state to meet its energy needs with 100% renewables by 2045. 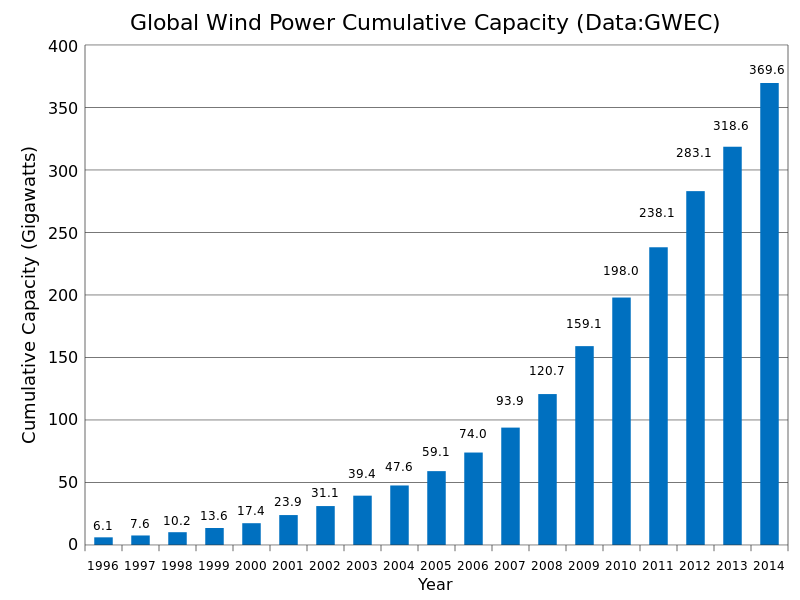