Menu
You are here: Articles2016 ICSUSA ARTICLESMay 2016 - Climate Change and the New “Re-new”

Climate Change and the New “Re-new”

The prefix “re:” is getting a lot of press and airtime of late. We may be used to reading or hearing about this prefix in such words as recycle, remake, rebate, revisit, review, refocus, retype, regenerate and so on.

The word “renewables” from a climate perspective, however, has taken on a whole new and important imperative, as in renewable energy.

Producing energy by any means other than through the use of fossil fuels is essential if we are to keep the goal of not allowing the planet to warm up more than 3.7 degrees Fahrenheit. This is the upper limit scientists think that may be safe before superstorms cause havoc with the weather. [Note: Many scientists now think even this may be too high and the limit should be no more than 2.7 degrees.]
Action is being taken all around the world to reduce the emission of the greenhouse gas, carbon dioxide, the primary culprit in the warming of Earth. Here in brief are a few:

This reduction in coal-burning, primarily for generation of electricity and for heavy industry [primarily steel, and cement] is having a positive impact. Together with energy efficiency, and investment in solar and wind energy, the bar chart for “Global energy-related CO2 emissions” has flattened. [See IEA [International Energy Agency] bar chart for years 1975 -2015].

This is a big deal and in the past has only happened in recessions and in political upheavals.

In the first 2016 issue of the Energy Infrastructure Update report, “the Federal Energy Regulatory Commission notes that five new ‘units’ of wind (468 megawatts) and six new ‘units’ of solar (145 megawatts) accounted for 100% of new electrical generation brought into service in January.”

The chart “Wind Power Thrives” from Bloomberg details some of this growth in renewables. It states that “Global wind energy capacity has grown 83% in 5 years, to 423 gigawatts. [Note: actual amount of energy delivered will be less and will depend on actual wind conditions.]

A “gigawatt” or 1,000 megawatts, is an enormous amount of energy and will provide enough power for about 700,000 homes.

Some additional renewable energy facts include:--China installed 21 gigawatts of wind energy in 2015, 2 1⁄2 times that of the U.S.

Solar is also growing rapidly globally. Note the bar chart of “Installed Capacity (MWdc)” for the years 2010 to 2020 with estimates for 2016 through 2020. The units MWdc are megawatts of direct current which is what solar cells deliver before they are “inverted” to ac or alternating current used in typical homes. 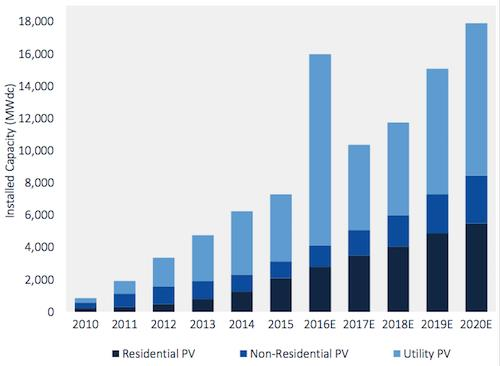 Meanwhile, in this photo taken by Scott Kelly [NASA] from the International Space Station this past year, every white dot is an oil drilling platform in a west Texas oilfield. This shows the challenges that remain.