Menu
You are here: Articles2020 ICSUSA ARTICLESJune 2020 - In New York State the Grid [Not Grill] Just Got Cleaner

In New York State the Grid [Not Grill] Just Got Cleaner

It is a large property in Barker N.Y., some 1,800 acres, on the shores of Lake Ontario near Buffalo. It is the site of the last remaining coal burning power plant in New York State [NYS] and it just ceased operations in April 2020. At one point, employing several hundred workers, the 685-megawatt plant in the last few years was idle a good part of the time and was now down to less than one quarter that number of employees. It could not compete with energy policy changes, environmental regulations and cheaper ways to generate electricity: primarily gas, wind and solar.

Like other economic and technology transitions our country has experienced in the last century, this closing also has a human toll. Workers, young and older, took pride in their efforts to provide electricity to keep the lights on and were now without a job. NYS has plans to soften the blow with retraining programs, construction of a large data center on site and development of a lakefront town park. Transitions still have social costs that we must deal with. Coal ash, contained in two 250 foot high landfill mounds, provide “magnificent” views according to Somerset Operating Co. supervisor Daniel Egbert.

Just eight years ago New York’s five largest coal burning plants emitted as much carbon dioxide [CO2] as about 70 million cars. As we know, CO2 is the primary greenhouse gas contributing to global climate change. Much has changed since 2012.

But it is not just in NYS that change is happening. In the United Kingdom, in 1990, 70% of the country’s electricity came from coal: in 2019, it was down to 3%. In 2021 the largest remaining coal plant will also cease operating. The International Energy Agency [IEA] said that cheap natural gas had “shattered coal’s competitiveness in the European Union in 2019.” Natural gas still produces CO2 when burned, but is much cleaner and produces about half as much CO2 per unit of energy as coal.

In a parallel change Sweden announced that it closed its last coal-fired power plant in April 2020 two years ahead of schedule.This is part of an on-going energy transition from fossil fuels to renewables, and it is happening none too soon.

Let’s look at the temperature bar chart labeled, “10 Hottest Years on Record Globally.” The data were obtained from NASA [National Aeronautics and Space Administration], NOAA [National Oceanic and Atmospheric Administration], along with other research institutions, with the chart published by Climate Central. They tell quite a story. 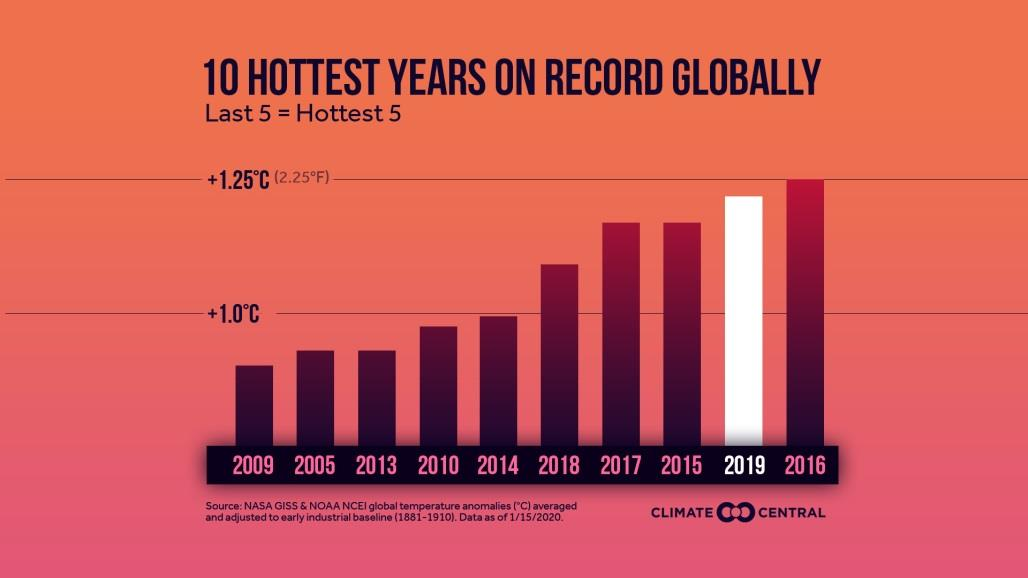 The two key points here are, first, that these 10 hottest years are all since 2005 in the climate record spanning over 130 years. And second, the chart indicates that the last 5 years are the hottest on record.

Next, let’s look at another bar chart from Climate Central titled, “Global Decades of Warming.” It is very clear that each decade of the last seven, was warmer than the previous one. Global warming is real, it is happening now and with significant consequences to our weather and climate. The point here is that this is nothing new. Warming has been going on for some time, decades, and denial of that fact has no basis. 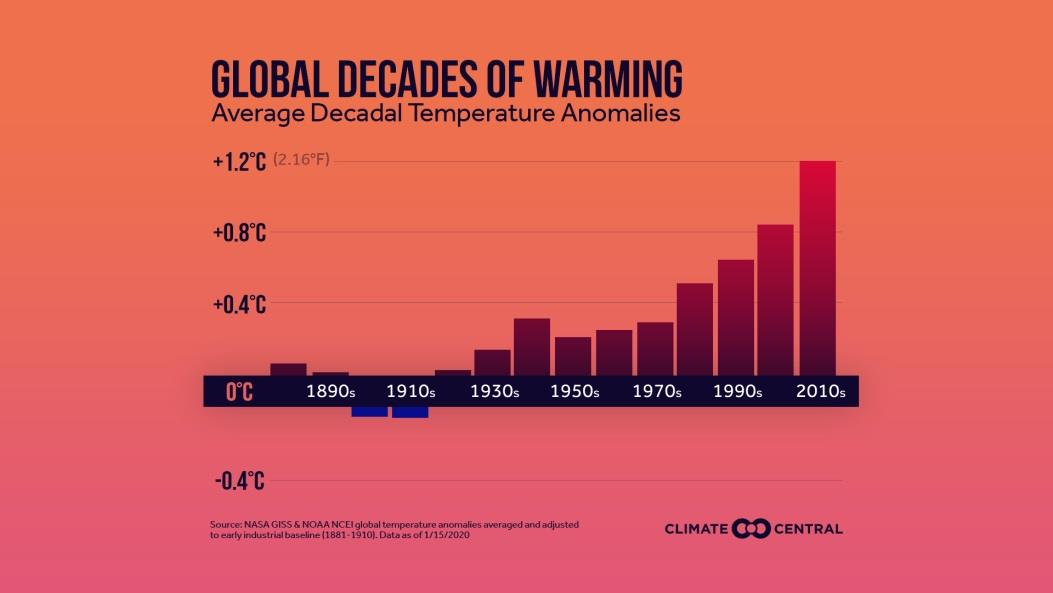 One measure of the cost to our country is to look at the impact of this warming and the damage that is happening to our homes, businesses and infrastructure as a result of extreme weather events. Note the bar chart labeled “United States: Billion-Dollar Disasters: Weather & Climate Events.” [Note: while this data are for the U.S. similar costs are being incurred globally.] 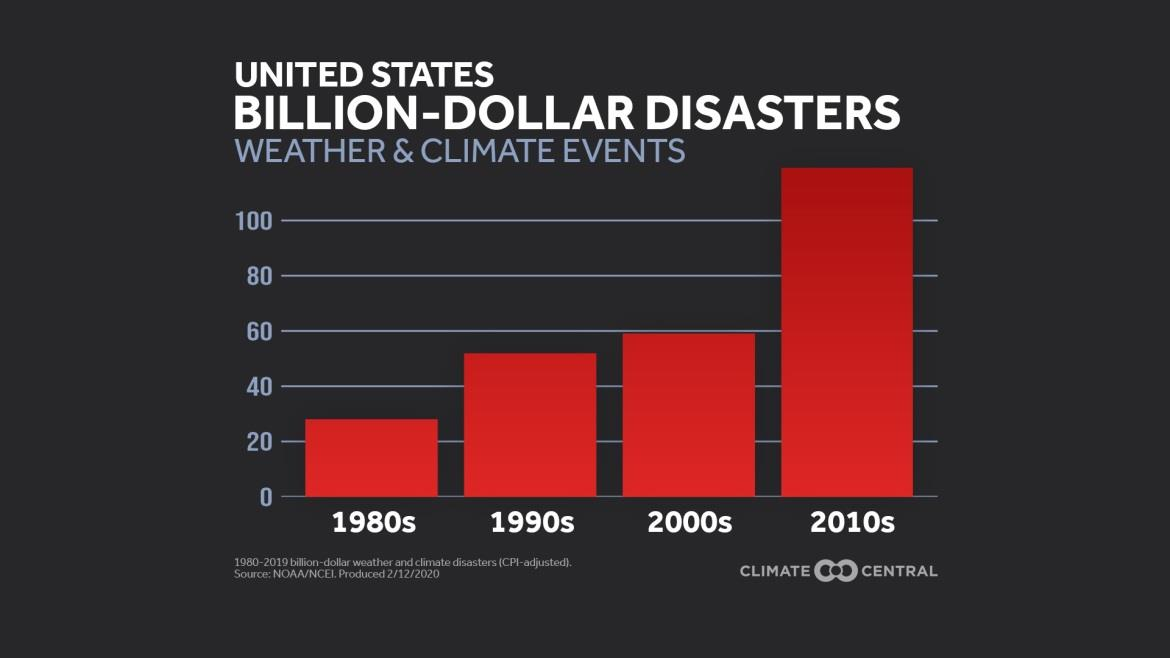 The data here are also very clear and all numbers have been adjusted to the CPI [Consumer Price Index].The dollar cost [which does not include loss of life] has quadrupled in the past 40 years to the point that in the last decade the average cost to our economy of these extreme weather events is more than $125 billion annually.

While COVID-19 has reduced the emissions of CO2 somewhat, as a result of the steps taken to combat this pandemic, estimates are that it is only some 15-20% of the total. So globally, we are still emitting some +/- 30 billion tons of CO2 into the atmosphere this year. Emissions have been reduced, not stopped or reversed which we must do. Now!

The consequences are becoming obvious in many ways and in different places.

Note the oval map of the Earth with the title “January to April 2020” in the upper right corner: the darker the color the higher the Temperature Anomaly in a particular location. [The chart was provided by BerkeleyEarth.org.] It shows that the eastern portion of North America had higher temperatures than normal from 1-3 degrees Centigrade [about 2 – 5 degrees Fahrenheit (F)]. But note the area in northern Russia [Siberia]; temperatures here were more than 10 degrees Centigrade [about 18 degrees F] above normal. Indeed, later in May 2020, temperatures here exceeded 40 degrees F above normal!

This kind of temperature anomaly will have huge consequences on Earth’s climate system. The loss of snow and ice cover will result in the absorption of more solar energy, the melting of the top layer ofpermafrost with the release of methane, a very potent greenhouse gas, which will result in more warming, etc. In other words, we have a perfect climate change “feedback loop.” 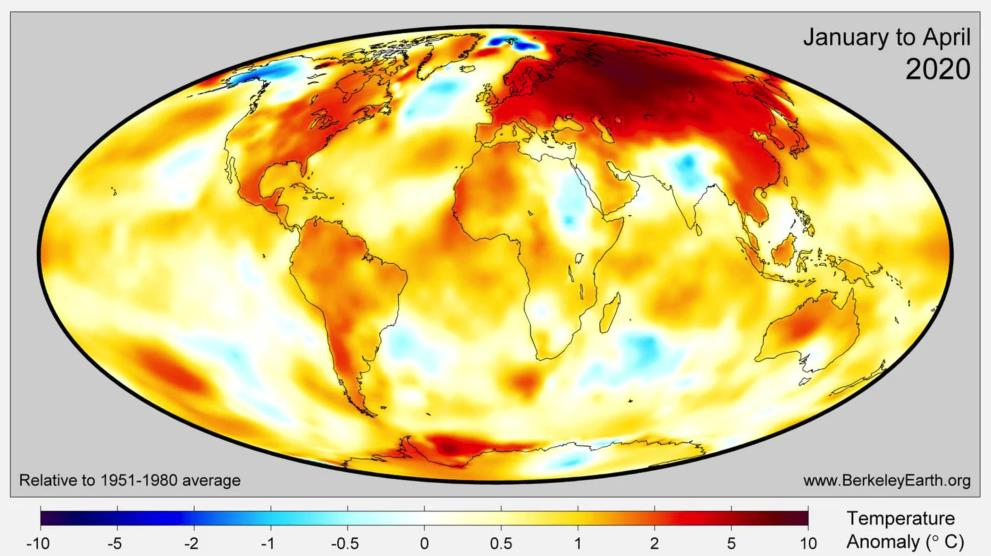 Indeed, in May 2020, CO2 levels in Earth’s atmosphere reached 417 parts per million, a level not seen for about 3 million years when Earth’s temperature was about 4 -5 degrees F warmer and sea levels were at least 50 feet higher.

We need to get our act together and now.