Menu
You are here: Articles2019 ICSUSA ARTICLESOctober 2019 - Climate Change: Climate Crises, What are We Doing?

Climate Change: Climate Crises, What Are We Doing?

Eremozoic. [ehre mo ZO ik] Even the pronunciation of this word, or an attempted version of it, sounds sad, even lonely. Indeed that word is one definition of the era we are now entering, the age of loneliness, as considered by some biologists [E.O. Wilson] and other writers and thinkers. Some scientists have argued for the term, Anthropocene, or the age of man, and various geological bodies are still evaluating this proposal.

The last [fifth] mass extinction was 66 million years ago with the demise of the dinosaurs and some three quarters of all plant and animal species on Earth. It was caused by a 6 to 9 mile wide chunk of rock that swept into Earth’s atmosphere at 44,600 miles per hour, or about 20 times the speed of a rifle bullet. The energy released and devastation caused by this event was catastrophic for life at that time.

And now, we have the recent U.N. report that suggests we are beginning a sixth extinction event. It states that “we” are now causing the death of about 200 species per day. According to Heidi Ledford in Nature, Vol.570, p 148, “Seed-bearing plant species are disappearing 500 times faster than they would naturally.”

National Geographic magazine, October 2019 page 48, talks about the “Library of Life.” It goes on to discuss species, and how they have developed a code, a genetic code, on “how to live on planet Earth. A species genome is a sort of manual; when the species perishes, that manual is lost. We are in this sense, plundering a library – a library of life.” We are literally burning the books of life!

The photo here [by author] of a road sign installation that says “We Are The Asteroid” was taken at Storm King Art Center in NY in the Fall of 2018 and was part of an exhibit on “Artists on Climate Change”. It expresses the notion that we are the “first species in the history of life to become a geophysical Force” [E.O. Wilson]. 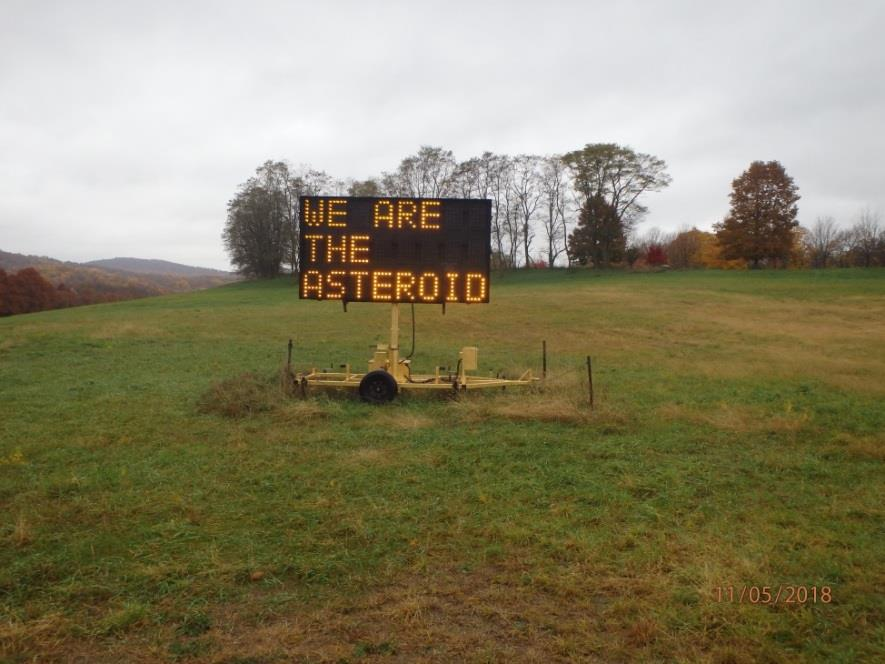 But while all of this unsavory business is happening in the present tense, all may not be lost. And it is difficult to see whether enough progress is underway to avoid the issues the planet faces but here is one positive worthy item of note.

The RGGI project [Regional Greenhouse Gas Initiative] was started in 2009 when 9 states in the northeast and mid-Atlantic regions decided to initiate a cap and trade system to reduce CO2 emissions. CO2 is the primary greenhouse gas that comes from the combustion of fossil fuels [coal, oil and gas]. This project applies to electric power companies with the intent to cap emissions and then to reduce them by 2.5% per year.

The previous governor of New Jersey, Republican Chris Christie, withdrew that state from RGGI in 2012. The current governor, Democrat Phil Murphy, with support from the legislature, has made rejoining RGGI a key part of his administrations fight against climate change. In the state map of northeast U.S., [Paul Horn/InsideClimate News] it gives the date of Jan. 1, 2020 for NJ to rejoin RGGI.

A bigger and welcome surprise perhaps is that Pennsylvania is moving forward to also join RGGI. It is a major fossil fuel state and Democratic Gov. Tom Wolfe has to persuade the Republican-controlled legislature it is in everyone’s best interest to do so. PA is the No. 2 natural gas producer and No. 3 producer of coal in the U.S. 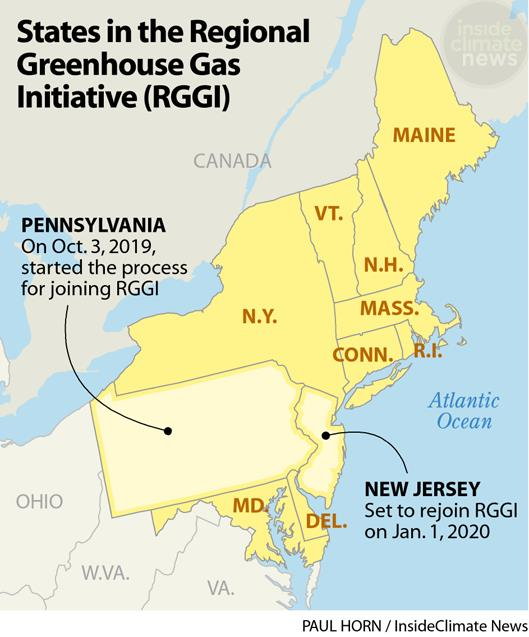 The addition of PA to RGGI would make a large contribution to states’ efforts to reduce CO2 emissions. As the horizontal bar chart labeled, “RGGI States’ Power Generation” indicates [Paul Horn/InsideClimate News], coal and gas account for about 50% of PA’s power generation. Plans here to reduce emissions of CO2, and move increasingly to renewables, would be a big help in having the U.S. meet its Paris [COP15] goals.

Additional good news with RGGI participants is that electricity prices have fallen 5.7% and their economies have grown at a faster rate than those of other states. 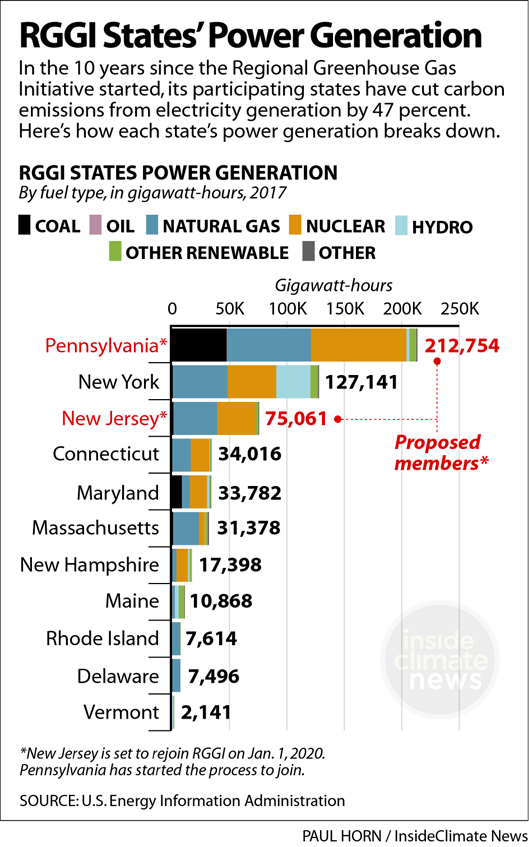 Meanwhile the emotional losses continue. Just like in Iceland recently, many people in Switzerland are mourning for the loss of their glaciers too. See photo [AFP/Fabrice COFFRINI] of black-clad hikers in a funeral march up a steep mountainside in the Alps at about 8,850 feet, to commemorate the loss of still another glacier. There were speeches, and flowers together with the mournful sounds from alphorns, a 12-foot long pipe-shaped wooden instrument. Some 500 Swiss glaciers have now completely disappeared. 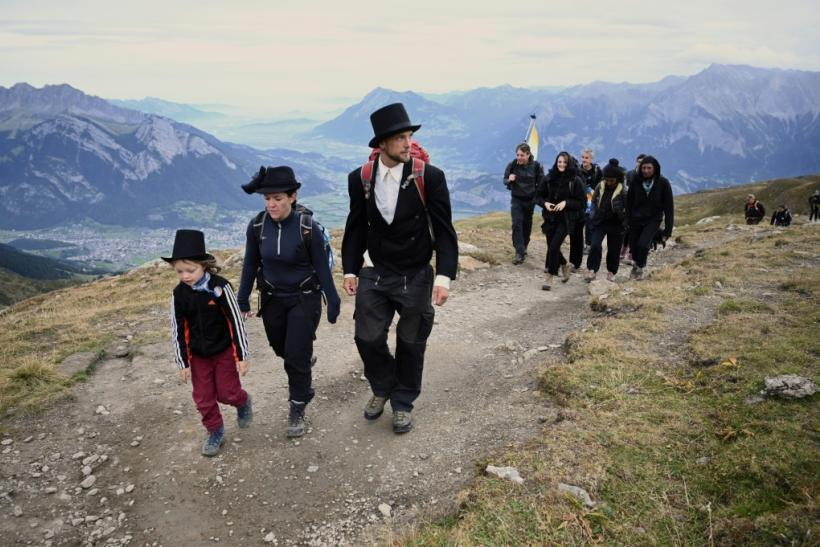 In an attempt to bring about change, Climate Marchers in Montreal came out in huge numbers on September 27, 2019 [crowd estimates are ~500,000] and made a powerful statement about the climate crises. In the lead was Greta Thunberg, the 16 year old climate activist from Sweden who has sparked young people everywhere to pressure those in power to address the climate crises. See photo of marchers in Mount Royal Park area [drone, Radio-Canada]. 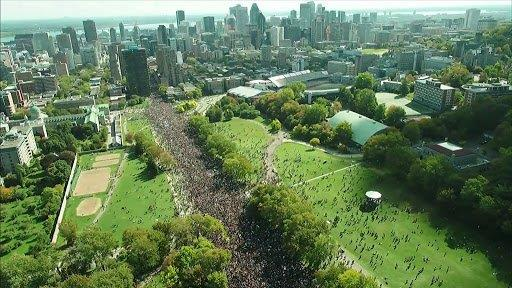