Menu
You are here: Articles2012 ICSUSA ARTICLESFebruary 2012 - Billions of Dead Trees: the New Canary in a Cage?

February 2012 - Billions of Dead Trees: the New Canary in a Cage?

The photo below is courtesy of the Mine Safety and Health Administration. It shows a coal miner in the early 1900’s with a canary in a cage. These birds, preferred over mice, were used to alert underground miners to the presence of carbon monoxide, a toxic gas. The birds became visibly distressed in the presence of small amounts of this gas and provided a warning to the miners. 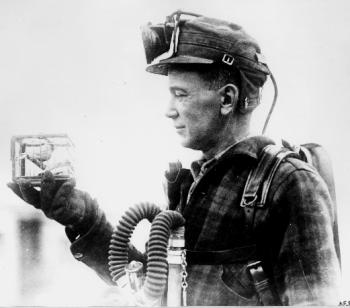 Today, observations suggest we have the equivalent of a new canary in a cage, this one for detecting climate change: the presence of billions of dead trees in the North American West. The cause is the mountain pine beetle. This little creature has been around the American and Canadian West for a long time but in small numbers. They were held in check by winter temperatures that frequently dropped to -40 degrees.

But temperatures do not get that low anymore and more of the beetles survive the winter. With warmer temperatures their life cycle speeds up and they can produce more than one generation in a season.Their population has exploded.

A photo from the Vancouver Sun newspaper [12/28/11] shows a pine beetle entering a small round hole in the bark, where it gains access to the tree’s nutrients. When the beetle numbers are high, the tree slowly starves and dies. According to the article, heavily forested British Columbia has lost about half of its commercial forests in the past 15 years.

Photographs on the WEB of forests damaged by these beetles are startling.

The whole issue is nuanced, however, with other factors merging into what appears to be a perfect climate change storm. Many parts of the West are also experiencing a drought. This weakens a tree and makes it more difficult for it to fend off insect attacks by producing extra sap to plug the holes. In addition, warmer summer weather reduces the life of the mountain snowpack with less water available later in the season. This combination is proving deadly to a large swath of the West’s forests. Therefore, instead of living forests absorbing carbon dioxide from the atmosphere by photosynthesis, they become net emitters as they decay, or burn in an increasing number of forest fires.

The complexity grows as we become home to other invasive insects that have little to do with a changing climate. The Asian longhorned beetle and the eastern ash borer, inadvertent ‘gifts’ of trade with Asia, are threatening to kill billions of elm, maple, ash and other trees in the Northeast and attempts to control their spread do not seem to be working.

The numbers are mind numbing.

Further, abandoned farms are reverting back to forests due to land use changes in the Northeast. With an increase in their primary food, carbon dioxide, whose atmospheric levels have been steadily increasing, growth rates of some species are actually increasing.

According to a recent article [Science 19 August, 2011, p. 988], scientists and foresters have collected data from the Amazon to the Arctic, that suggest trees are still consuming more carbon dioxide than they are giving off in decay. The data are current to 2007 but many changes have occurred in the last five years and that assessment may change.

This mosaic of information has not yet produced a clear picture of what to expect. This issue of ‘forces of growth and forces of death’ [NY Times page 1, October1, 2011] is very complex and full interpretation of the data is still incomplete.

As these scientists continue to do their work, other climate and atmospheric scientists are doing theirs: collecting and interpreting weather data and placing it in a long-term climate context. The NOAA map of the U.S. shows the range of precipitation experienced in 2011. Texas had its driest year in 117 years and large parts of the Northeast had its wettest.

Weather extremes are becoming the norm. 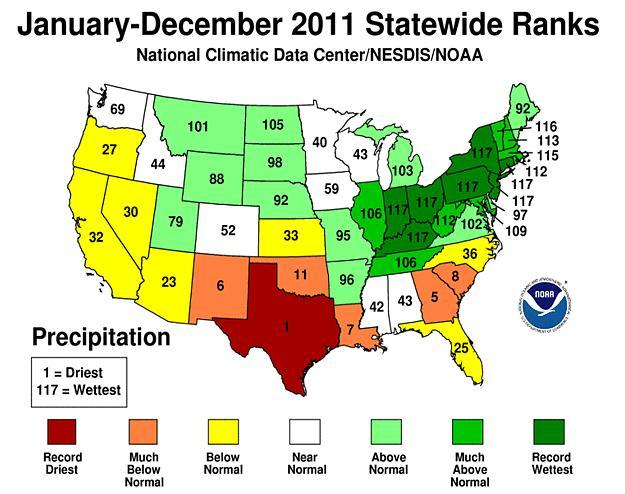