Menu
You are here: Articles2014 ICSUSA ARTICLESApril 2014 - The Climate is Changing: How About Us?

The Climate is Changing: How About Us?

Data, data, everywhere, and the brain did shrink,

Data, data, everywhere, and one could hardly think.

No Ancient Mariners these, but by 2013 some of the 209 lead authors, 50 review editors [from 39 countries], plus over 600 climate science experts [from 32 countries] on the Intergovernmental Panel on Climate Change [IPCC] may have felt this way. They were tasked in a multi-year effort to assess, evaluate, integrate and summarize some 9,200 peer-reviewed scientific climate related papers
published since the previous review 6 years ago.

This 2013 review is available online [www.ipcc.ch/report/ar5/wg1] and in book form March 2014 [cover photo]. This new volume has some 1535 pages of data, tables, charts, graphs, figures and text. The Summary for Policy Makers [SPM] alone is 27 pages.

It’s conclusions: “Warming of the climate system is unequivocal,” and “It is extremely likely that human influence has been the dominant cause of the observed warming...”

The SPM is almost a scientific cry for help, for action.

Look! Look! See what may happen. Do something!

The science is clear, the climate is changing and humans are largely responsible. The risks and costs to our society are real!

Let’s look at one man’s attempt to distill and represent the essence of the report’s findings.

Dr. Gregory C. Johnson, an oceanographer and climate scientist living in Seattle, was at home nursing a cold. He decided to use water colors and the ancient Japanese art form, haiku, to succinctly capture the SPM in 19 water color paintings, each with three lines of haiku. With permission from Serena Larkin of the Sightline Institute [daily.sightline.org/ClimateHaiku] two of those images are reproduced here. 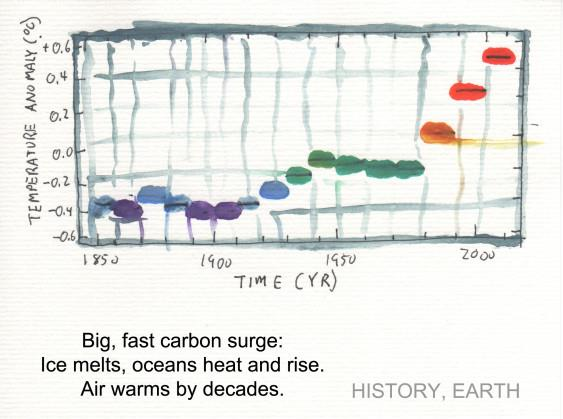 The first water color image is labeled, “Temperature Anomaly (Degrees C)” on the vertical axis, with “Time (YR)” on the horizontal axis. The last three decades are far warmer than any other in the 150 year temperature record. His three line haiku follows the illustration highlighting some of the impacts already seen with more to come.

In his second illustration we see a pump-jack. Once the oil obtained is consumed it produces greenhouse gases [GHGs], primarily carbon dioxide, which trap some of the outgoing infrared energy from the Earth’s surface, normally emitted to space, thereby warming our planet. The haiku again points out some aspects of our planet that are impacted by these increasing levels of GHGs. The other 17 illustrations make for wonderful viewing and reading on sightline.org. 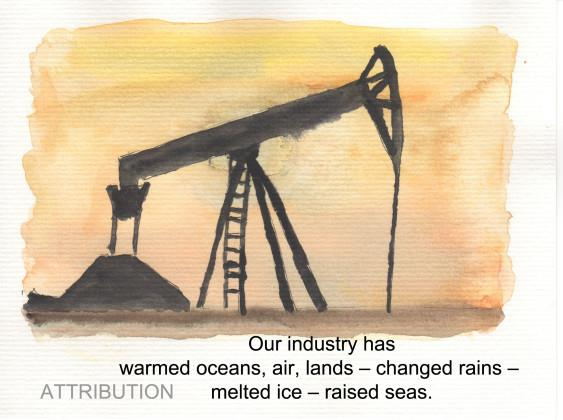 The IPCC process uses a cut-off date for considering and incorporating published articles. Dr. James Powell, a geochemist, was curious about the papers that were published after the cut-off date. He searched all publications on the subject of “Climate” from “Nov 2012 through Dec 2013”.

He found that of “2258 peer-reviewed climate articles by 9136 authors ... only one – ONE - author rejected man-made global warming.” This is illustrated by the large circle, of the same title with one very thin slice barely visible. That single publication was by S. V. Avakyan in the “Herald of the Russian Academy of Sciences” 2013, Vol.83. The title is “The Role of Solar Activity in Global Warming.”

The consensus is clear. There is virtually zero scientific disagreement on climate change or its cause.Dr. Powell also states: “Some of the most vocal global warming deniers (for example, Lindzen, Monckton, Singer, and Watts) have never written a scientific paper in which they say explicitly that human-caused global warming is false. Why? Because if they did, they would have to come up with the
evidence to back up the claim, and there is no such evidence. If there were, surely they would have told us by now.”

Holly Richmond of Grist adds: “The problem is that while 0.01 percent of peer-reviewed scientists are deniers, 30 percent of the members of the U.S. House and Senate are.”

This winter the U.K. experienced its most exceptional period of rainfall, flooding and gale force winds in 248 years; over 80,000 flights were cancelled in the U.S.; CA has a drought that may be the most severe in several hundred years. This extreme weather is beginning to impact our planet, our home.

To ignore this report and its findings is a disgrace.