Menu
You are here: Articles2012 ICSUSA ARTICLESMay 2012 - Climate change no longer a puzzle

May 2012 - Climate change no longer a puzzle

Referring to Russia in a radio broadcast in October 1939, Winston Churchill stated: “Russia is a riddle wrapped in a mystery inside an enigma ...” The same may have been true several decades ago in terms of our understanding of Earth’s climate system, but no longer.

The following image of a puzzle shows a lot of pieces in place while some are still missing. But there is no doubt about the image that is emerging. The Intergovernmental Panel on Climate Change published its report ”Climate Change 2007: The Physical Science Basis,” and it took 998 pages to summarize and interpret all of the data then available. This was not a sound bite.

An updated report is due in 2013 and it will fill in many of the missing pieces, giving us all an ever clearer picture of what is happening to Earth’s weather and climate system.

As research continues, and questions generated by earlier research findings are answered, the data continues to make it clear that climate change is occurring. Note the chart, courtesy of Capital Climate, “2011 – 12 Ratio of Heat to Cold Records.” 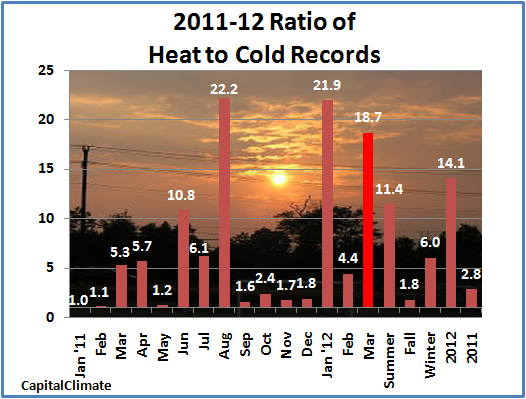 The heat records in March 2012 were unmatched in recorded history for both the U.S. and Canada. The ratio of 35.3 to 1, of highs to lows, is almost off the charts.

In the Midwest, Great Lakes, and Northeast, monthly average temperatures were 15 degrees or more above normal. According to Bloomberg [4/9/12], more than 15,000 daily temperature records were broken or tied in the U.S. in March, and the average temperature in the contiguous U.S. was 8.6 degrees above the 20th century average.

At least 110 locations in 27 states set record high average temperatures in March according to the website Capital Climate. Burlington, Vermont for the month was a whopping 12.2 degrees above normal.

There are a lot of numbers here and the intent is not to have one’s eyes glaze over with them. What is important to recognize is that not only temperature, but also precipitation [rain or snow], and extreme weather events of all kinds are becoming the norm [Nature470,378-381,2/17/11]. “March Madness’’ may no longer just refer to basketball, and Thomas Friedman [NYTimes February 17, 2010]
has used the term “global weirding” to refer to weather where the “hots … get hotter, the wets wetter, the dries drier and the most violent storms more numerous.”

Why is this? Why would it happen?

There is no second Earth to experiment with to see what happens when one variable or another in our climate system is changed and the outcome measured. Civilization today is simultaneously altering many aspects of Earth’s biosphere, and the challenge for climate scientists is to try to make sense of it all. As meteorologist Dr. Jeff Masters states, “this is not the atmosphere I grew up with.”

James Hansen, Director of the Goddard Institute of Space Studies [GISS], has shown that the Earth has an energy imbalance [Atmos.Chem.Phy.11,13421-13449,2011]. Just like we try and balance our checkbook with inputs [deposits] and outputs [expenses], Hansen and his colleagues have shown that more energy is entering our Earth systems than is being released back into space: hence our energy
imbalance.

Based on satellite measurements and ground based data, he has estimated that we now have an extra 250-500 million megawatts of extra energy in Earth’s land, water and air components. By way of comparison, the windmills on Rand Hill and elsewhere NW of Plattsburgh each produce about 2.5 to 3.0 megawatts of electrical energy at optimum wind speeds.

Therefore this extra energy is about equivalent to that produced by more than 100 million windmills operating at their rated output. The uncertainty of the impact of all of this extra energy on weather and climate is no longer in question. 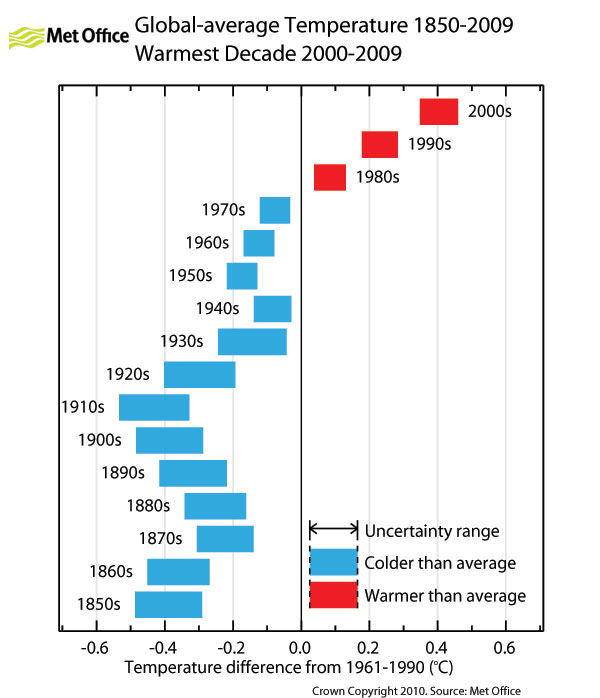 The data are very clear. The chart from the Meteorological Office, the climate research organization in England and part of the Defense Ministry, “Global Average Temperature 1850-2009,” gives the average decade temperatures for the past 160 years. Average temperatures are rising and the increases are primarily due to greenhouse gases whose levels are continuously increasing and have been for more
than a century.