Menu
You are here: Articles2021 ICSUSA ARTICLESJuly 2021 - An Artist and Science Look at Sea Level Rise, Drought and More

An Artist and Science Look at Sea Level Rise, Drought and More

The installation is titled, ”On the Horizon” and was intended to celebrate summer solstice [June 20] while illustrating the danger of climate change. The artist, Ana Teresa Fernandez, said “You can pull up all the stats and figures (about climate change) and you go numb.” But one number in particular that caught her attention was the estimate that the sea level will rise 6 feet by the year 2100.

While visiting a beach on the Pacific she looked at the horizon and tried to imagine a sea level rise [SLR] of that magnitude and what it would mean. She conceived of the idea to install 19, six-foot high acrylic resin cylinders filled with sea water standing at the edge of the ocean, with waves lapping on the beach and around them. Her intent was for individuals “to experience the relationship of their body to what the future will feel and look like. We are in the present, posing with the future.”

Two images here illustrate her work. The first is a single column at sunset from her website, onthehorizon.org, and the second is all 19 columns, also at sunset, with waves lapping at their base. The challenge has been to take something from the future and put it into the present. 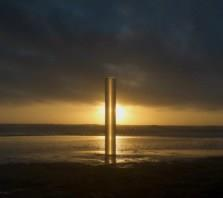 Her hope is “that the work will spark a conversation among viewers about the areas that will be most at risk with sea rise.” Second photo is by Ana Teresa Fernandez. 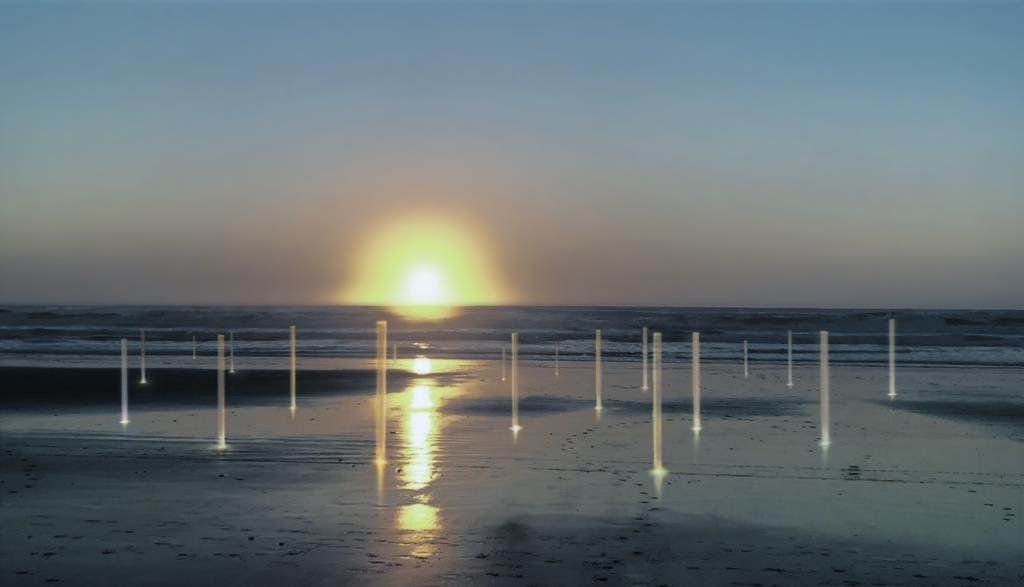 And while SLR is a direct result of fresh water pouring into the oceans from melting glaciers and ice caps, as well as expansion of the sea water itself as a result of its warming, other areas of the planet, and right now in the West and Southwest, are in drought. The irony is that this fresh melt water, needed in so  many places for farming and drinking water, is mixing with salt water.
The western portion of the U.S., almost a third of the continental U.S. is either under “Severe,” “Extreme,” or “Exceptional Drought.” See the image titled, “U.S. Drought Monitor, June 8, 2021” with data compiled from several government agencies as indicated on the illustration. 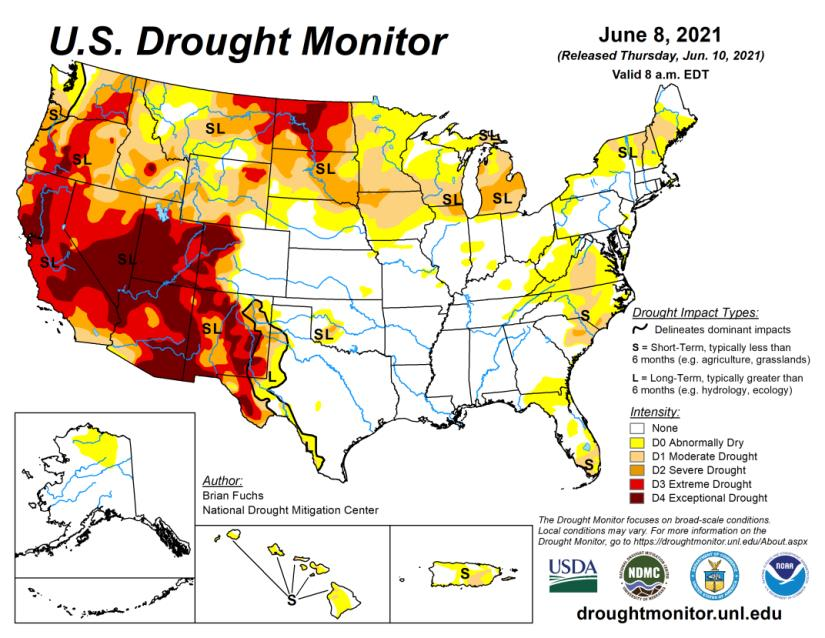 It is un-nerving to see the various extremes of weather all combining to change the norm of prior experience on the land with major impacts in many areas. Smaller snow packs in the mountains releasing less water into lakes, rivers and reservoirs; hotter temperatures that dry out the land and vegetation; changes in rainfall patterns that further reduce water availability; and forest fires caused by tinder dry conditions that result from all of the above.
Not mentioned so far is that higher winter temperatures do not reduce certain insect populations such
as the mountain pine beetle which has killed billions, yes billions, of trees in the Rocky Mountains. This
further adds to the fuel load for fires making them hotter and larger. The fires also release enormous
amounts of carbon dioxide and the trees no longer remove that greenhouse gas [GHG] from the atmosphere via photosynthesis.
The photograph here of an almost dry reservoir, which was taken by Justin Sullivan/Getty Images, gives a glimpse of the severity of the problem.

The enormous emissions of carbon dioxide and other GHG’s are a direct cause of the warming, and show no signs of abating. The past year with COVID and the lockdown, slowed up emissions somewhat but we are back on track with business-as-usual to resume global emissions to pre-COVID levels. 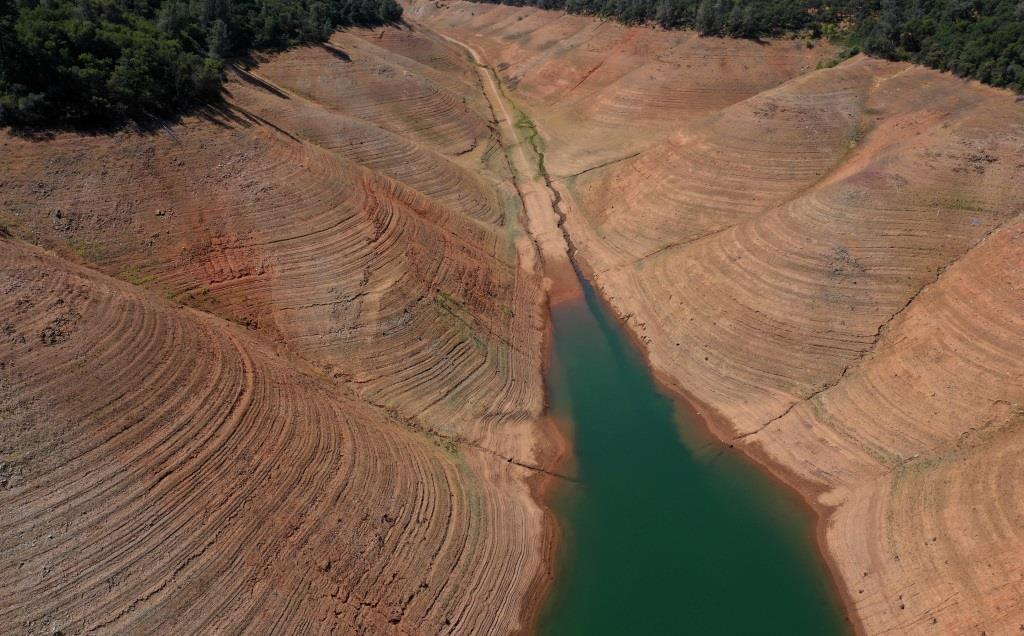 However, the times they are a changing.

Here is an interesting quote. “There is not a regulated coal plant in this country that is economic today, full period and stop.” Who said that? Those words came from the CEO of the country’s largest electricity utility, Jim Robo of NextEra Energy, at a conference in March of this year. He indicated that the reason “coal-fired power is unprofitable everywhere in the country” was due to less expensive sources such as solar, wind and gas.

This is a reflection of the “energy disruption” that is underway right now. Another example of the change from fossil fuels to renewables that is on-going is in Norway. Government policies and the availability of a variety of electric vehicles have had an enormous change in sales of internal combustion engines which are falling rapidly. In June 2021, as seen in the circular graph labeled “June 2021 Norway Passenger Auto Registrations,” 85.0% of all new cars were plug in electric vehicles [PEVs]. This includes 64.7% BEV [battery electric vehicles] and PHEV’s [plug-in hybrid EVs] at 20.3%. 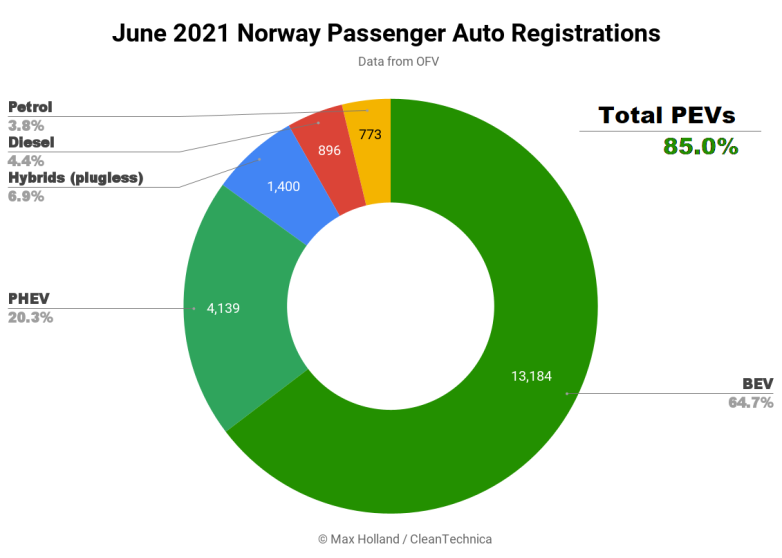 These are just a few of the promising developments on-going today.

And, so it goes