Menu
You are here: Articles2010 ICSUSA ARTICLESJanuary 2010 - Ozone: It's more than just a gas

Robert Louis Stevenson, intrigued by the duality of human nature, wrote a book titled, "Strange Case of Dr. Jekyll and Mr. Hyde." It is a vivid portrayal of a split personality.

We can make a similar comparison to ozone, an important gaseous component of our atmosphere.

First, let us look at what it is and where it comes from.

As we may have read earlier, oxygen is the second-most abundant atmospheric gaseous component, at a level of about 21 percent; together with nitrogen the two account for 99 percent of the gases in the atmosphere. Ground-level ozone, a simple molecule containing three atoms of oxygen, is formed from an oxygen molecule containing two atoms of oxygen and an additional oxygen atom that is produced in smog.

That additional oxygen atom is produced by a complex series of reactions and conditions, however. Suffice to say that vehicle exhaust and power-plant emissions containing nitrogen oxide, spiced with lots of other volatile organic compounds from incomplete combustion, together with heat and ample sunlight (UV), and voila, one gets ozone. It really sounds like a chemical soup and indeed it can be looked at that way. (Don't worry, this is about it for the chemistry.)

This ozone in the lower atmosphere, called the troposphere (below about 30,000 feet), is the "bad" ozone — the Mr. Hyde side. Clean-air rules place limits on it as it is recognized as a major health risk and a breathing irritant. The limit varies considerably around the world with the United States limit of 80 parts per billion (ppb) somewhat higher than the World Health Organization (WHO) limit of 50 to 60 ppb. This very low permitted amount gives one an appreciation of how toxic the gas is. But now, let's look at the "other" ozone.

The "other" ozone is present in the upper layers of the atmosphere, called the stratosphere (from about 30,000 to about 150,000 feet), and plays a very good and useful role, as we will see — the Dr. Jekyll side. Prior to 1979, our knowledge of its formation, loss and role in the stratosphere was limited. Some scientists warned in 1974 that the ozone levels could be reduced by chlorofluorocarbons (CFCs) and other gases from human activity. (Note: These scientists went on to earn the Nobel Prize in chemistry in 1995 for their work.)

It wasn't until 1979, however, that NASA was able to send up a spacecraft and confirm that warning. The satellite was equipped with an instrument called a Total Ozone Mapping Spectrometer (TOMS) and collected data for 24 years. This was followed up by a spacecraft from the Netherlands that continued these measurements from 2004 to this day. The data collected brought about an awareness of the formation of an "ozone hole," a sharp reduction in the amount of ozone present, most prominently over Antarctica, and brought about unprecedented global cooperation and action. 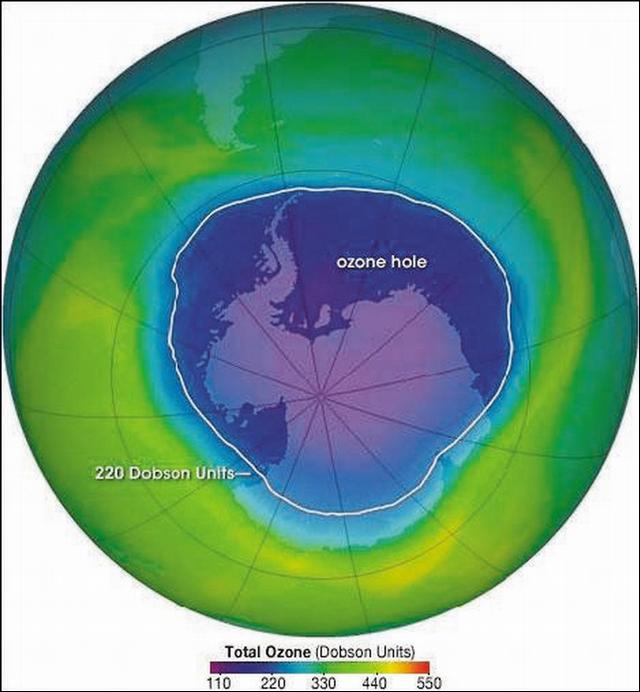 Now let us look at the instrumented satellite image (see accompanying graphic). The image, derived from TOMS, shows the ozone concentrations (in what are called Dobson units, but don't worry, it is just a term): The lower the number, the less the ozone; the larger the number, the higher the ozone level. The number 220 marks a line within which levels are lower than historical or more typical. The outline of the Antarctic continent can be seen with a long narrow strip of land pointing up to the southern tip of South America at the top of the image.

Surrounding the South Pole are changes in the intensity of the black shades (the actual image is in beautiful color and can be seen online, "NASA Earth Observatory, Antarctic Ozone Hole"; it is very dramatic) reflecting changes in the levels of ozone. The center part of the image, centered over the South Pole, marks an area where ozone loss is at a maximum. There is a gradual increase of ozone as one moves away from the pole.

So what's the problem with a hole in the ozone, anyway? It's a toxic gas, isn't it?

The answer is very simple: not up here. Without the "good" ozone in the stratosphere, life on the surface of our planet would be imperiled by incoming UV radiation from the sun. What ozone does is to absorb most of the incoming dangerous UVB and all of the UVC radiation. This radiation is powerful stuff and can cause skin cancer, destroy living cells and change basic life processes. These findings got the attention of the world's leaders; in 1987, this led to the Montreal Protocol on Substances that Deplete the Ozone Layer. The treaty came into effect in 1989 and banned the worst ozone-destroying chemicals.

These chemicals include CFCs used in refrigeration and air-conditioning, and bromine containing compounds used in fire extinguishers, among others. The protocol brought about some quick dividends and the concentration of these chemicals peaked in the late 1990s and have since begun to decline. These compounds are also very powerful greenhouse gases and this action thus reduced their impact on global warming, as well. It was a free gift for the climate. Ozone levels have not recovered yet, however.

It will take many decades for these chemical compounds to be removed from the stratosphere and for ozone levels to return to historical levels. Until then, sun-block cream is the norm at the poles, and everywhere else for that matter. The North Pole also has a loss of ozone but to a lesser degree and indeed, smaller ozone reductions have been measured at all latitudes. Latest estimates are that it will be 2060 or later before ozone concentrations return to a "normal" level.

Like any other dynamic and complicated process, however, other factors may influence this timing. We continue to pour enormous quantities of carbon dioxide, methane, nitrous oxide, hydrofluorocarbons, perfluorohydrocarbons and sulfur hexafluoride, among other gases, into the atmosphere. These six are designated greenhouse gases (GHGs), and the EPA, or perhaps Congress, is set to try and regulate these. The chemical soup is thick, complex and much of the chemistry still unknown. It will take time, lots of research and the efforts of many different scientific disciplines to understand our impact on the atmosphere and climate and whatever necessary steps may need to be taken to help minimize that impact.

There is still more to the ozone story, but that will have to wait for another time.