Sometimes new information and data comes to our attention that may surprise us or make us uncomfortable: it may not fit with our impression or experience. The chart here of the March 2011 Monthly Global Temperature might do just that. The data indicates that this past March was the 13th warmest on record over the last 131 years. On a local level, we had lots of snow, wind and cold weather. On a global basis, however, the warming trend of the recent decades continues with January and February 2011, also well above the 20th century averages. 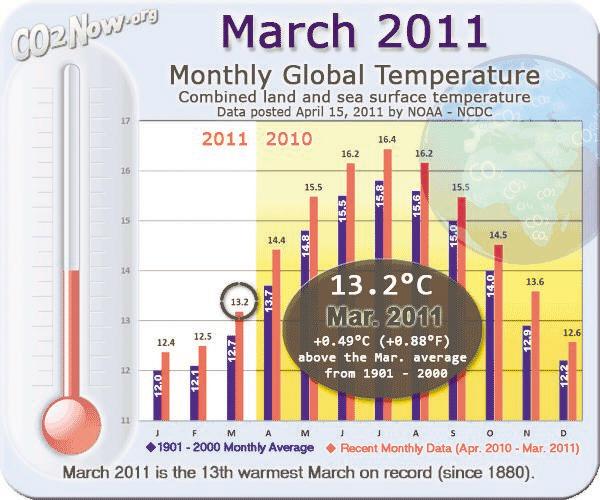 The chart also includes the data for each month of last year (see the right hand bar of each pair), showing that every month had a higher global temperature than the 1901-2000 monthly average. This is consistent with the known chemistry and physics of the warming effects of greenhouse gases (GHG's) and the fact that these GHG levels in the atmosphere continue to increase. The data was collected by the National Climate Data Center within NOAA and illustrated here by CO2Now.org.

When large amounts of data is available, as is the case with monthly global temperatures, scientists can make clear interpretations and comparisons when new data is acquired. Many times when new data is being developed, however, no data base exists to compare it with. Let's look at one organization, The Alfred Wegener Institute for Polar and Marine Research, who is doing just that.

This research institute was established in Germany in 1980 as a public foundation. It has a budget of more than $140 million, a staff exceeding 900, and is mostly funded by the German Federal Ministry of Education and Research. Its "research mission is to improve our understanding of ocean-ice-atmosphere interactions, the animal and plant kingdoms of the Arctic and Antarctic … within the Earth's climate system." Their website has much more information and detail on the full range of their research efforts.

Recent measurements of the fresh-water volume flowing into the Arctic Ocean from north flowing rivers, particularly in Siberia, have shown a significant increase. Increased snow, ice and glacial melt, and more extreme precipitation events, have all contributed to this increased volume. What impact will this have on Earth's climate system?

Enter the Polarstern, a research vessel from the AWI. This icebreaker, which spends on average 310 days a year at sea, and built expressly for polar research, is a formidable platform on which to gather data. It can plow through sea ice almost 5 feet thick at 5 knots and reach large areas of the Arctic in a season.

One of the current tasks of the Polarstern is to deploy sophisticated ocean buoys. From an anchor point on the ice, or float on the ocean surface, a probe can be lowered to a depth of up to about a half mile.

This torpedo-shaped probe or "profiler" has a variety of instruments in it to measure temperature, salinity, pH and other parameters of value. It also has a motor so that the probe can move vertically on its cable, repeatedly, through the water column collecting data and then broadcasting the information to the surface.

The results are just beginning to come in. One observation is that the freshwater content of the upper Arctic Ocean has increased by about 20 percent. This correlates well with the increased volume of river runoff. This freshwater is of lower density, so tends to sit on top of the more dense and saline ocean layer.

This finding raises many questions yet to be answered: what will be the impact of this less dense water sitting of top of the warmer ocean water below and cutting off the heat flow to the ice and atmosphere?

Will this increased flow of more fresh water into the Arctic Ocean bring more ice south through the different sea routes toward Europe and have an impact on the climate there? Will this change the ocean circulation system, a giant "conveyor" that carries heat north to moderate the European climate?

Lots of questions but no definite answers yet and the story on this particular issue is still unfolding. Stay tuned.