And we can’t stop now with just those “characters” previously identified as a cause and manifestation of climate change. In the two earlier articles we discussed seven and now will add a few more.

How about “sea level rise” as another character in this climate change story. This is an important one and will impact anyone or any city that has a coastal exposure. The 2016 graph from the University of Colorado titled “2016_rel2: Global Mean Sea Level...” is shown below. The sea level rise is clear and the trend is now plus 3.4 millimeters/year or about an eighth of an inch/year. 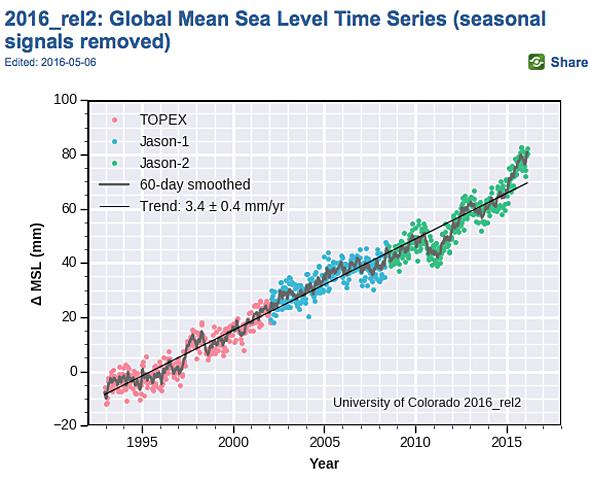 This graph includes data from thousands of ocean “floats” all over the world as well as satellite data. The last few years suggest that the rate of sea level rise is increasing and comes from a) the expansion of water as it warms, and b), contributions from increased melt of glaciers and ice sheets.

Insurance companies and state agencies are working to see how flood insurance rates should be set, who will pay, and how much for the coverage. 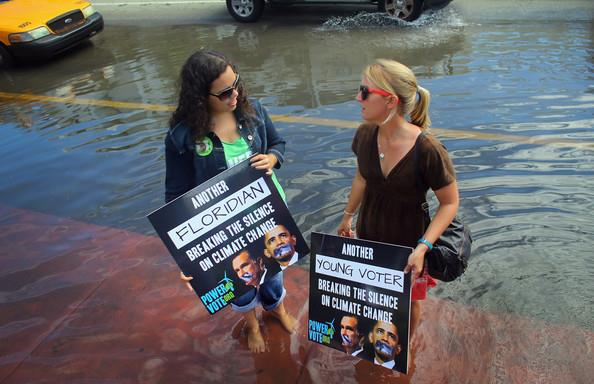 Some people in Florida, as shown in photo by Amanda Lawrence, holding signs, “Young Voter” and “Floridian,” are protesting the lack of attention to flooding by their governor who appears to deny that sea level rise is an issue. And these flooding events are becoming much more common there, and in many cases, are just due to normal high tides; not hurricanes or severe storms.

The flooding obviously does not stop in Florida. The photos of the recent flooding event in Louisiana are astonishing as well as heart-breaking. How does one tally the cost of lost lives, some 40,000 homes submerged, infrastructure destroyed and so on? Measured rainfall of 25 inches, or more in some places, fell in just 3 days. A flood of this scale is only expected once every 500 or 1000 years scientists say. 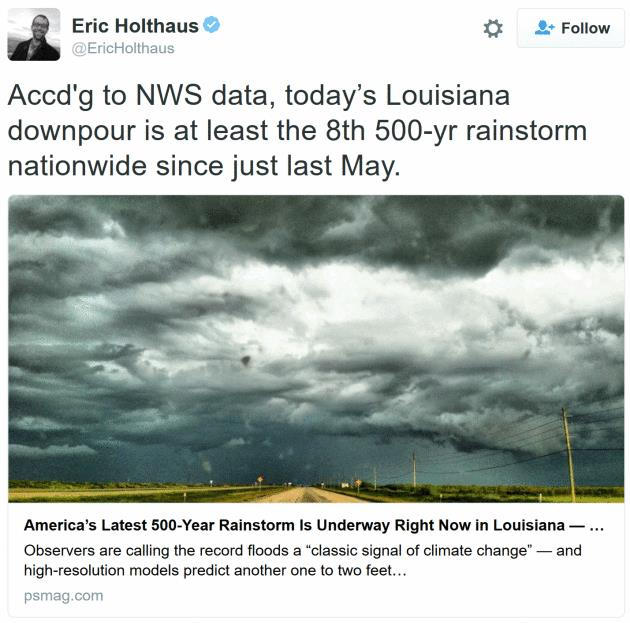 Remember too, in March, a directed jet stream drew record amounts of moisture from the Gulf of Mexico into Louisiana and the South and dumped over 20 inches of rain in the region. These are no longer isolated occurrences.

And let’s not forget what happened in West Virginia in late June when rain was falling at the rate of 2 inches per hour. It was another “1-in-1,000” year storm, and Sheriff Jan Cahill of Greenbrier County said, “It was just like buckets of water falling out of the sky.” Or how about the 30 inches of rain in the Dallas area in Texas in May? The list is long.

Globally too, these events are happening with increased frequency. Remember the historic Paris floods in June when the Seine crested 20 feet above its usual levels? Or the recent floods in China, Mexico, Poland, Germany and other areas in central Europe from a series of powerful storms? This is truly becoming a global issue; in Macedonia a freakish violent rainstorm was called a “water bomb” by the officials there.

But times are changing, and as severe weather and climate change are taking hold, renewables are beginning to enter the picture. This “character” in the climate change story is working to reduce greenhouse gas [GHG] emissions to help slow sea level rise event and extreme weather events caused in large part by these emissions. 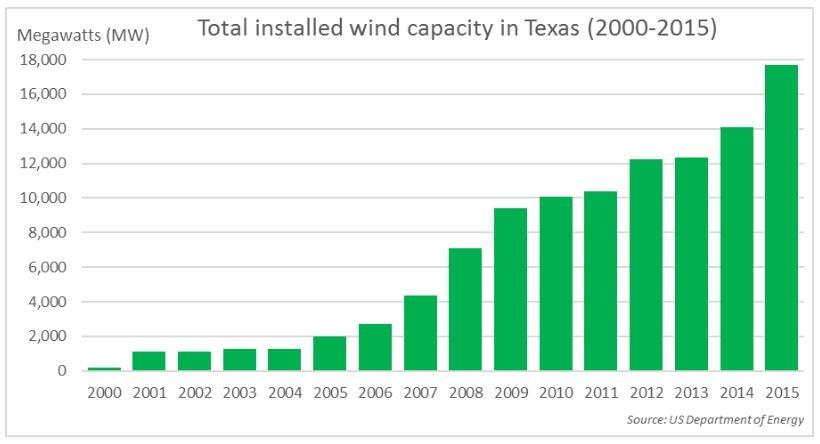 The U.S. Department of Energy recently issued this chart, “Total installed wind capacity in Texas (2000 – 2015.)” It shows an enormous growth in capacity to almost 18,000 Megawatts. For comparison purposes a nuclear power plant has a typical rating of about 1,000 – 1,500 Megawatts. The year-over-year growth in wind generated energy is very promising. Texas wind power is now cheaper than fossil fuels.

And this is for Texas alone; it gets better.

The Energy Department recently released the “2015 Wind Technologies Market Report.” More than 4,300 utility-scale wind turbines were installed last year in 20 states, and the total number of wind turbines now operating is 48,000 in 40 states.

But our energy transition is only just starting. We need to decarbonize our economy; right now!

And so our story and challenge continues. That is just the way it is.