Menu
You are here: Articles2015 ICSUSA ARTICLESDecember 2015 - “The Times They Are A-Changing”: Climate Change

“The Times They Are A-Changing”: Climate Change

Bob Dylan wrote the above titled song in 1963 and in a sense the words still resonate today. A few lines are as follows:

Don’t stand in the doorway

For the times they are a-changing.”

Perhaps the largest conference of its kind on climate change takes place in Paris, France from 30 November to 11 December 2015. More than 190 countries will have delegations present and about 50,000 participants are expected. See www.COP21paris.org . They will be trying to change “the times.”

The goal is “to achieve a legally binding and universal agreement on climate with the aim of keeping global warming below 2.0 degrees Centigrade” [ o C] compared with pre-industrial levels. If this conference is successful, and that is a big ‘if’, then we will see an acceleration of major changes that have already started with renewables, energy efficiency and in the way we generate, store and consume energy.

Recent measurements indicate that we have now passed the 1.0 o C or 1.8 o Fahrenheit [F] of warming since pre-industrial times. Many scientists are already concerned the 2.0 o C limit is too high based on the extreme weather the planet is already experiencing with the 1o C rise.

In the world of climate science and climate change little things do matter. See illustration [climate.NASA.gov/causes] of 4 small molecules that are primarily responsible for our warming climate.

On the right is the molecule carbon dioxide. [The definition of a molecule is one that contains multiple atoms. In this case this molecule contains one carbon atom and two oxygen atoms.] The ability of CO 2 to absorb energy emitted towards space and return it to Earth’s surface accounts for most of the increased warming Earth is experiencing.

Not to be outdone, methane with its four hydrogen atoms and central carbon atom is also a powerful greenhouse gas [GHG], about 25 times as strong as CO 2 . This gas is the primary component of the gas obtained from fracking that is delivered in pipelines to our homes, power plants and factories. Wellhead losses and pipeline leaks are a concern that is now finally recognized and being addressed by EPA.

Then we have nitrous oxide, another potent GHG, consisting of two nitrogen atoms and one oxygen atom. Its main source is from internal combustion engines [cars and trucks] along with other industrial processes.

Water vapor is a strong GHG and actually is part of a feedback process so that as the climate warms, more of it is present in the atmosphere, which in turn causes more warming. Note the two atoms of hydrogen and the central atom of oxygen in this illustration.

Little things do mean a lot.

Just in case one needs to see some very recent extreme weather examples that have been influenced by the extra energy in the atmosphere look at Cyclone Chapala in early November in the Persian Gulf. This is the first cyclone ever to hit Yemen in recorded history, and provided 10 years’ worth of rain, up to 24 inches, in just 2 days according to NOAA satellite data [see image].

Or, let’s consider the historic floods in South Carolina in early October 2015 with up to 27 inches of rainfall measured. Losses are estimated at over $1 billion and claimed more than 17 lives. Most standard insurance policies do not cover water damage and many people did not even live in a flood zone.

According to U.S. Geological Survey [motto, “science for a changing world”], 17 streamgages recorded the highest peak streamflow, ever, and at least 8 more were destroyed. More than 70 miles of I-95 wereclosed for several days. According to Governor Haley, this weather event might happen only every 1,000 years. 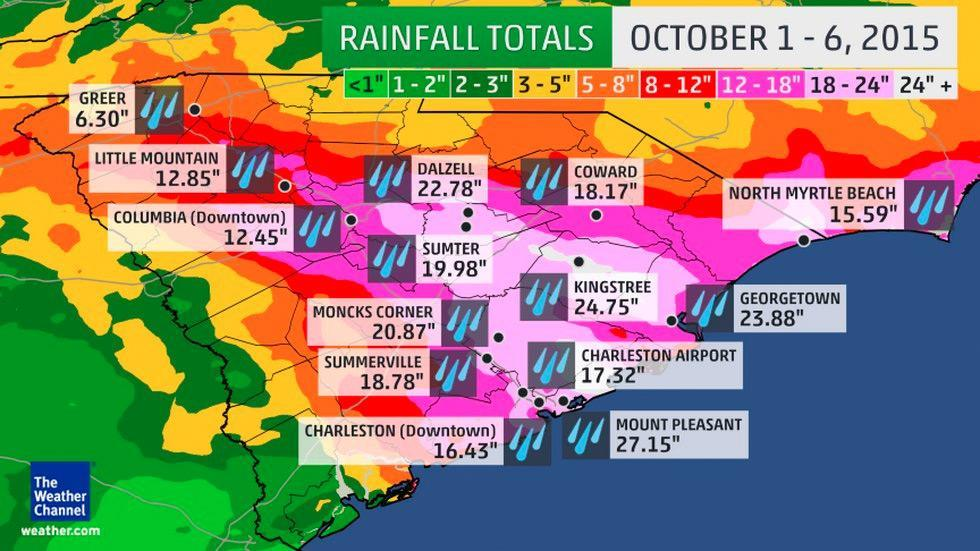 Let’s not stop here. How about Hurricane Patricia that hit western Mexico as a Category 5 storm also in October 2015 with the strongest winds ever recorded in the Western Hemisphere; 200 mph.

This photo, by Scott Kelly [NASA], is of Hurricane Patricia from the International Space Station. He said
“Be careful”.

Our leaders better agree on a GHG reduction plan or extreme weather will be, well, the norm.