OK, so what is going on with the weather? North Country humor frequently involves comments such as, “if you don’t like the weather, wait a minute it will change,” or “we get three seasons in a single day,” orsome other variation of these. But really, what is going on with our recent weather? A colder than usual May, record amounts of rain in May/June, and now in July a major heat wave concurrent with a record level of water in Lake Champlain.

If one goes to the National Weather Service site in Burlington, VT one will find that the rainfall amounts in May and June were high. Indeed, they set a two month record of 18.6 inches for that time period over the entire data set of 127 years.

What is happening elsewhere with the global nature of weather? There were devastating floods in Calgary, Alberta also at this time. June temperatures in Talkeetna , Alaska hit 96 degrees F, and was warmer than Miami; Valdez, Alaska hit 90 F breaking the record of 87 F set in 1957.

In late June 2013, in Phoenix, AZ, US Airways cancelled 18 flights because the maker of those jets did not have performance data greater than 118 F. At 119 F it was not known for sure how much runway the planes would need to safely take off.

Climate scientists are aware of these local happenings and the global extreme events as well. It has become a major study as to why with climate change, these extreme events occur, and last so long.

Research is beginning to shed some light on possible reasons why.

What scientists do is to collect and interpret data. There is no room for opinion. There is no justification for guesswork. The process of science is slow, meticulous, with time to shape ideas, challenge those ideas and formulate an explanation that fits.

One area that climatologists are concentrating on is the albedo effect. This is a measurement of how much of the incoming Sun’s radiation or energy is reflected back to space. Snow and ice have high albedos as they reflect a large portion on the incident radiation. See the illustration here showing the per cent reflected for a variety of different Earth surfaces. For example, fresh snow reflects 80% - 95% of incident light whereas water bodies only reflect 10%-60% of incident radiation. The balance of the energy is absorbed. 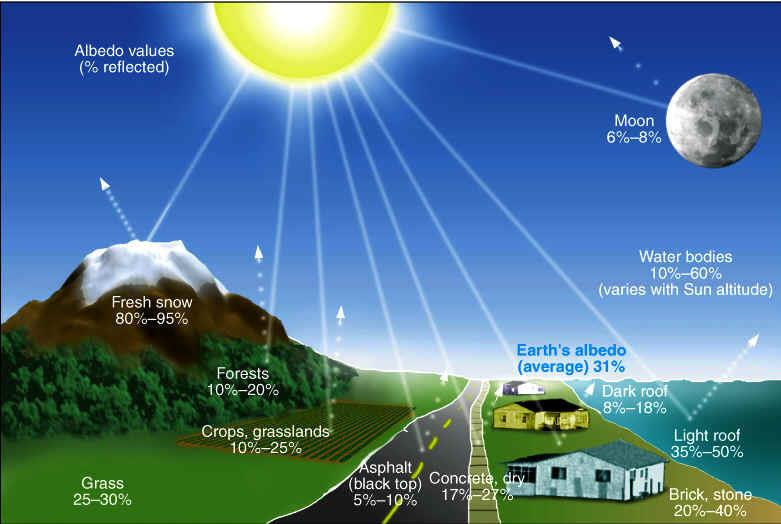 Due to global warming we are seeing record amounts of sea ice loss in the Arctic Ocean; both a loss of ice in Greenland and a surface ice melt of its glacier that reduces its albedo; and finally, significant decrease in mountain snowline. All of these decreased albedo changes increase significantly the amount of heat energy in Earth’s atmosphere. See three part diagram that illustrates the decreasing
albedo. This change in the energy balance of our planet has a big effect on our weather and therefore the climate.

So now what happens with all of this increased energy? Data are now showing that the jet stream is changing in a major way. The jet stream, which dictates our weather, is a river of air three or more miles above the Earth’s surface that moves rapidly from west to east. It generally has a gentle wavy pattern as shown on the map below of U.S. and Canada. 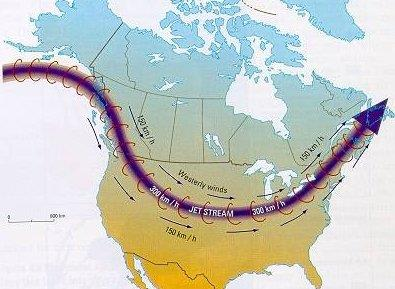 However, in recent years it has taken on a new shape [see second illustration “January Pattern So Far”] with deep troughs and peaks. This then brings cold air further south than usual, and/or warm humid air much further north than usual, for extended periods of time. This accounts for the recent weather patterns we have seen but it will take more data and time to firmly establish what is happening here. 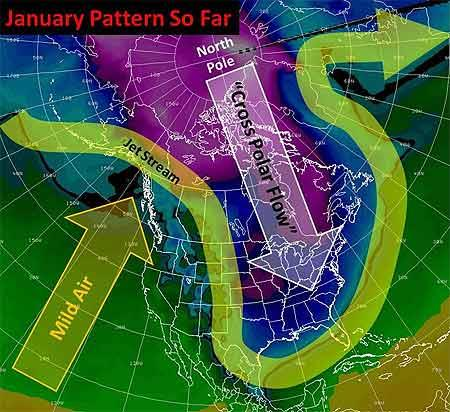