These included, along with a few other facts, its current levels in the atmosphere at 387 parts per million volume (ppmv), the structural nature of the molecule that is responsible for it absorbing infrared radiation that is normally emitted into space and thus its global warming action, and the growing amounts of carbon dioxide in the atmosphere since the industrial revolution.

Let's continue talking about carbon dioxide. It has quite a story and a lot to say.

One aspect is the long-lived nature of the molecule in our atmosphere. The carbon dioxide that we emitted yesterday and which began to absorb infrared radiation then, is in large part still here today doing the same thing. And it will be there tomorrow, and the next day, and the next year, still absorbing radiation near the Earth's surface.

And it is cumulative. What we add today is added to yesterday's amount, and what we add tomorrow will be added to that total. It doesn't stop. While about 30 percent of the carbon dioxide is ultimately absorbed by the oceans, and another 10 percent is eventually recycled into the biosphere (plants, trees, grasses, etc.) over a period of decades; the rest will continue to remain in the atmosphere for centuries doing what it likes to do: absorb infrared energy normally lost to space.

Now, let's look at some interesting data: see accompanying chart, titled "Atmospheric Carbon Dioxide." This curve is called the Keeling curve after the chemist who developed the test and gathered the data atop Mauna Loa, Hawaii.

And, why set up a sampling station here? As a scientist, Charles Keeling wanted to get the best data he could. He needed a clean, well-mixed sample of air, uncontaminated by any nearby population centers or industries; and he got it. The westerly breezes coming off the Pacific Ocean were thousands of miles from the Asian landmasses and well-mixed because of the diverse air and ocean currents encountered.

He began collecting the data in 1958 and the chart shows 50 years of data collection that tells an interesting story. It should be noted that worldwide monitoring of carbon dioxide only began in the 1970s by the NOAA (National Oceanic and Atmospheric Administration). Today there are about 100 sites worldwide where these measurements are made, but none so long as at Mauna Loa. 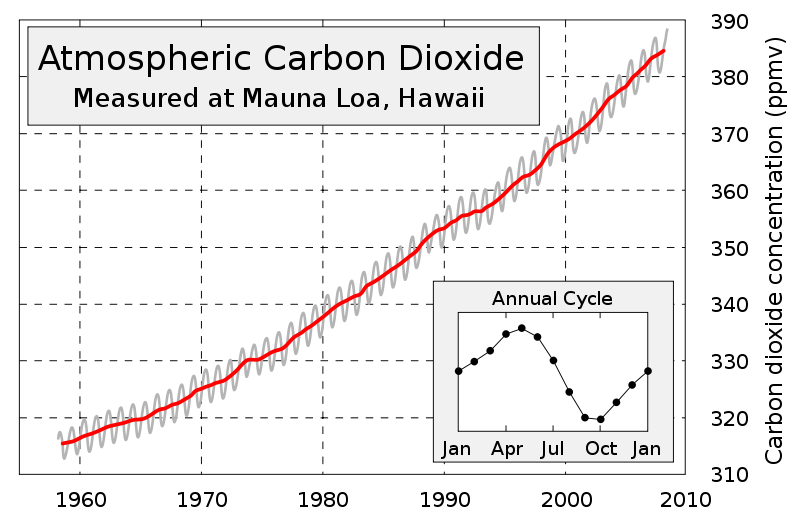 In looking at the curve of carbon-dioxide concentrations over this 50-year period, we notice three things.

First is the steady and steeply rising concentration of CO2 from about 315 ppm to about 385 ppm. The second observation is that the slope of the curve is climbing more steeply in the later years. And lastly, we see the saw-tooth pattern of an annual measurement over a 12-month period as shown in the lower right hand corner of the chart ("Annual Cycle").

Now let's just look at this in some detail. OK?

Let's also look at U.S. and global oil consumption for this period.

Let's just write this number out; 31,000,000,000. These are huge numbers with the United States consuming about 25 percent of the world's total. Most of this oil is used to power vehicles, trucks, planes, ships, heating/cooling our homes and so on. And most of these combustion products wind up in our atmosphere; certainly all of the carbon dioxide does.

Is it any surprise then that with this population growth and oil consumption level, Keeling's curve has the shape it has? There is a clear correlation here and we are not even discussing the consumption of coal, natural gas or biomass burning that also contribute to increased carbon dioxide levels.

The third aspect, the Annual Cycle, shows how over a 12-month period our planet's atmospheric levels of carbon dioxide change. In the Northern Hemisphere spring (April), plants begin to bud, leaves form, flowers grow, trees put on wood and this continues over the summer until October when photosynthesis begins to slow. The 'fixing' of this gas also slows and the levels begin to build up again. It is almost as though our planet has taken a deep breath. Since more of the land and vegetation on Earth is in the Northern Hemisphere, we do not see this great an uptake by the Southern Hemisphere in their spring (October).

If we accept the science that one of carbon dioxide's properties is to absorb infrared radiation at the Earth's surface that is normally emitted to space, and that its levels are continuing to grow, at an ever increasing rate, over a relatively short period of time, then why aren't we feeling the heat more?

In fact, we are beginning to. But more about that next month.