Menu
You are here: Articles2009 ICSUSA ARTICLESNovember 2009 - Greenhouse gases: What are they? Why the concern?

November 2009 - Greenhouse gases: What are they? Why the concern?

You may be surprised by this fact: Greenhouse gases are necessary for life on Earth as we know it.

Please stay with me now, I am not making this up. This is what the science tells us. Physicists have determined that the average temperature of our planet would be about zero degrees Fahrenheit (F) if we did not have greenhouse gases in the atmosphere that we all breathe.

Instead we find that the average temperature of Earth is about 59 degrees F. Pick up any climate or environmental chemistry or physics text and they will all say the same thing.

So what gives? Why is it that our planet is so much warmer than expected? We do know that the two gases that make up 99 percent of our atmosphere, oxygen and nitrogen, neither absorb nor emit thermal radiation. The devil is in the details and in this case the answer lies in the composition of the gases in the remaining 1 percent. Small amounts of a number of gases such as carbon dioxide, water vapor, methane, nitrous oxide and ozone create what is called the "natural greenhouse effect" — and these gases are called greenhouse gases (GHGs). 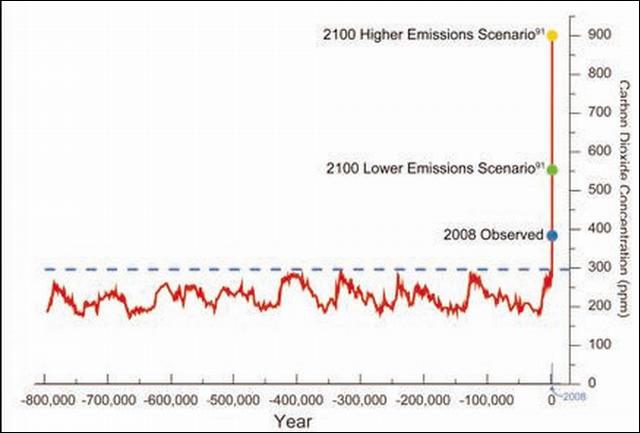 The chart included represents the levels of one of these greenhouse gases, carbon dioxide, over the past 800,000 years. This chart was taken from a 196-page report, "Global Climate Change Impacts in the United States." The report was released to the president and Congress in June 2009, and is available free online. It represents the consensus and best thinking by all of the related scientific agencies in the U.S. government together with a number of universities.

This data itself comes from the analysis of tiny gas bubbles trapped in ice cores. The cores are up to two miles long and have been extracted from the ice sheets in both Greenland and Antarctica. Similar data has also been obtained for several of the other trace gases over this period of time. All of the graphs show that the levels of the gases have varied over a range of values. Let's just look at carbon dioxide for now.

The graph clearly shows that over about six ice ages, each lasting about 125,000 years, the concentration of carbon dioxide has ranged from a low of about 170 ppm (parts per million) at the peak of the glacial cycle, i.e. the most ice, to about 300 ppm during the warm interglacial periods such as the one we are in now. As the climate cooled, the levels of carbon dioxide dropped, and as the climate warmed, the levels increased, in a nature driven cycle. What is of interest, and concern, to climate scientists is the far right side of the curve showing the levels of carbon dioxide today. We are now approaching 390 ppm of carbon dioxide, something the planet has not seen in this 800,000-year time interval. In addition the levels are increasing by about 2 to 3 ppm per year.

The concern is where the levels appear to be headed in this century. There are two emission scenarios charted here. One implies no basic changes in our fossil fuel consumption and would result in levels of about 900 ppm carbon dioxide by the end of the century. The other lower point at 550 ppm carbon dioxide could be the result if we, as a civilization on this planet, make significant reductions in our consumption patterns. Both of these levels are far beyond what is "natural" and nothing like our civilization has ever experienced. The current thinking is that these levels of carbon dioxide have not been seen for millions of years and at that time our planet was a very different place. So it is like "a little bit of GHGs is good, but a lot is bad."

This past week, an organization called 350.org held demonstrations all over the world in some 180 countries. The 350 number, many climate scientists believe, is the ppm level of carbon dioxide we need to get to in order to prevent major climate change and a disruption of the very basic foundations of civilization as we know it today. The trajectory of where we are heading (550 to 900 ppm), and where we need to go (350 ppm), is what is unsettling most scientists and some policy makers.

The Supreme Court of the United States declared in spring 2007 that these greenhouse gases were pollutants and should be regulated under the Clean Air Act. The Environmental Protection Agency (EPA) was charged with this responsibility. In March 2009, Lisa Jackson, the new EPA head, issued a proposed "endangerment finding" that carbon dioxide and five other greenhouse gases "threaten the public health and welfare of current and future generations." As you might expect, that story is still playing out.

In addition to carbon dioxide, the five other gases are methane, nitrous oxide, hydrofluorocarbons, perfluorocarbons and sulfur hexafluoride. All of these molecules contain three or more atoms. For example the methane molecule contains four hydrogen atoms and one carbon atom in a tight embrace, and the nitrous oxide molecule has two nitrogen atoms and one oxygen atom bound together. The last three gases above are primarily the result of industrial production and usage; they are complex molecules containing many hydrogen, fluorine, chlorine and carbon atoms.

All of these molecules have the physical property of absorbing outgoing infrared radiation from the earth's surface and then releasing this heat to the surroundings (air, water, earth]). Although we had been in the midst of a "natural" cycle of warming, an interval in the glacial cycle that the earth has experienced many times before, we are no longer. We have introduced something "new" and we are entering new territory. The "new" is the billions of tons of additional GHGs we, all of us, are introducing into the atmosphere on an annual basis. That's not "natural" and that's the rub.

The scientific career of Raymond N. Johnson, Ph.D., spanned 30 years in research and development as an organic/analytical chemist; he is currently founder and director of the Institute of Climate Studies USA (www.ICSUSA.org). Climate Science is published the first Sunday of every month